Now that it’s no secret that Wall Street investors are buying distressed houses in metro Atlanta for the emerging homes-for-lease industry, the question is what that means for the surrounding neighborhoods and the future of homeownership. 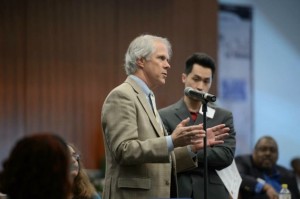 John O’Callaghan, who heads ANDP, the region’s major non-profit focused on the foreclosure response, suggests that local leaders try to leverage the private sector’s investments to benefit the rest of the community.

There’s a lot to leverage. Just one firm, the Blackstone Group, has purchased more than 1,400 homes in metro Atlanta as part of more than $4 billion the firm has invested in 24,000 houses nationwide since 2012, according to a story in April in businessweek.com.

These Wall Street investors are the latest wrinkle in the constantly changing fabric of rental housing. Their arrival raises new questions around the issue of homeownership in the wake of the recession. Investors present both new opportunities to improve neighborhoods, as well as threats that could hurt neighborhoods.

Almost 200 business and civic leaders met to explore some of these issues at the Oct. 10 Neighborhood Investment Conference, sponsored by Piece by Piece – Regional Response Initiative. The audience included private investors, lenders, non-profit agencies that work in the foreclosure arena, and policy makers including Joyce Sheperd, an Atlanta councilmember who’s been fighting derelict housing for years in neighborhoods near Turner Field. 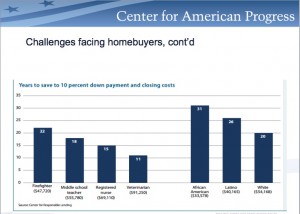 This chart shows the time it takes various categories of potential homebuyers to save a down payment and closing costs. Credit: Center for Responsible Lending,via Center for American Progress

The investors have arrived to the single-family housing market as it’s in a state of transition, said Sarah Edelman, a policy analyst with Center for American Progress. Housing prices and interest rates are the lowest they’ve been in years, she said. Buying is cheaper than renting in most parts of the country.

However, buying a house is not an option for many families and individuals because they can’t qualify for a loan, she said. According to a slide Edelman presented, the time it would take to save a 10 percent down payment and closing costs would be 22 years for a firefighter, 18 years for a middle school teacher, and 11 years for a veterinarian earning $91,250 a year.

LaShawn Hoffman, CEO of the Pittsburgh Community Improvement Assoc., said more than 400 houses have been foreclosed in that neighborhood near Turner Field. He said the planning to improve Pittsburgh is complete: “Now it’s down to, ‘How do we get the dollars to implement this?’ But it has to be socially conscious. Investors are not happening in our neighborhood because they can’t get that quick return.”

On the upside of the investor-driving housing phenomenon, O’Callaghan said non-profits could learn some “best practices” from the private sector, such as how to scale the processes involved in buying foreclosed houses and bringing them up to standard for resale. In addition, investors may contribute to safe and stable neighborhoods because they want to rent their houses and have them increase in value.

Dan Immergluck, a Georgia Tech professor, presented findings from his research into the phenomenon of investors in the single family market in Atlanta and three other cities. Credit: ANDP

On the downside, research by Dan Immergluck, a Georgia Tech professor who’s written extensively on housing and foreclosure, revealed the fear of some homeowners that investors who buy in bulk could choose to dump their low-value properties.

Bruce Gunter said near the end of the conference that it had been, “a tale of two different worlds.” The non-profit sector is starved for cash, and wealthy investors have their own agenda, said Gunter, the former CEO and a co-founder of Progressive Redevelopment, Inc., which before the recession had been one of Georgia’s largest nonprofit owners and developers of affordable housing.

To make his point that the private sector is less than interested in partnering with non-profits, Gunter asked for a show of hands from investors who had stayed to the end of the meeting. A few hands went up. O’Callaghan said: “There are nice folks at the table. But if the capital is not from Atlanta, not from Georgia, the southeast, in some instances not from the USA, then they are constrained.”

From Sheperd’s perspective, derelict housing is more of a problem than housing owned by Wall Street investors. She said that just this month she attended the demolition of a house in Pittsburgh that had been vacant and abandoned for 15 years. Such dwellings are unsightly and can give refuge to troublemakers. But getting a legal right to tear down private property, even one that seems abandoned, can be a very involved process.

“A lot of issues we’re talking about are state law. It’s much more complicated than what you assume it would be,” Sheperd said. “This is an issue that is tough and it’s hard, and we have to work with everything we can to make a difference.”

Editor’s Note: Audio and PowerPoint presentations from the conference are available at the Piece by Piece website and photos of the event are on Facebook.