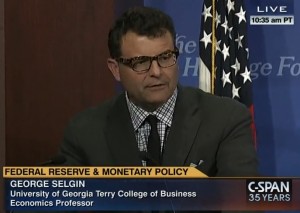 As Yellen was preparing to talk with reporters, a retired vice president of the Atlanta Fed and a UGA economics professor were speaking at a separate panel discussion, hosted by the Heritage Foundation, on what the Fed has done in its 100-year history for U.S. monetary policy.

Despite the different venues, the conversations shared an interest in the Fed’s role in unemployed and underemployed Americans.

Incidentally, Yellen said the Fed has determined that unemployment is too narrow a gauge of “slack in the labor market.” Consequently, the Fed will rely less on the unemployment numbers in deciding when to start raising interest rates in the future. The stock market slumped on this and other decisions contained in the Fed’s announcement.

Yellen said she knows from friends and relatives about the difficulty some people face in landing a good fulltime job. Yellen said the jobs situation remains firmly bound to the broader economy, which was hit hard during the recession and hasn’t recovered. 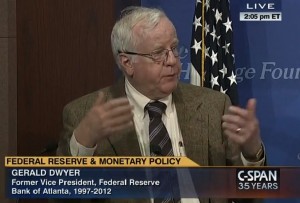 “We have had a disappointing recovery,” Yellen said. “Monetary policy has done what we can to help that. But the linkages are not as strong and as quick as we’d like them to be.”

UGA professor George Slegin contended at the Heritage panel, on the topic, “The Federal Reserve at 100,” that the Fed has worsened the jobs picture, just as it has worsened the rest of the economy that it touches. Slegin teaches at the Terry College of Business, serves as a senior fellow at the Cato Institute, and was a visiting scholar at the Atlanta Fed for three years, according to his vita.

“The recovery from the recent crisis has been one of the worst recoveries every,” Slegin said. “There’s never been a recovery worse than this. The implication of this is [that] doing nothing would have been better than what the Fed did.”

Gerald Dwyer, a former vice president at the Atlanta Fed, said felt that he had been invited into the lion’s den at the Heritage Foundation. Dwyer said his political leanings are more Libertarian than anything. 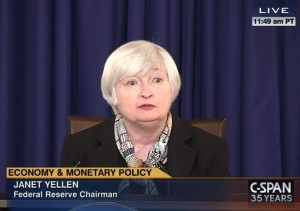 Dwyer’s remarks began by noting some blips on the economic charts in 2007 that, in hindsight, warned of problems ahead. Dwyer characterized the Fed’s response to the recession as one of people trying to do the right thing.

“We can be sure of one thing: The financial crisis revolved around housing,” Dwyer said. “It actually also revolved around securities, specific securities – collateralized debt obligations, backed by subprime mortgages. … I’m not saying this caused the crisis. It shows these securities were intimately involved in the way it unfolded….

Dwyer retired from the Atlanta Fed in 2012, where he directed the Center for Financial Innovation and Stability. Dwyer now is a visiting economics professor and BB&T scholar at Clemson University, along with serving as an adjunct college professor in Madrid and Dublin, according to his website.