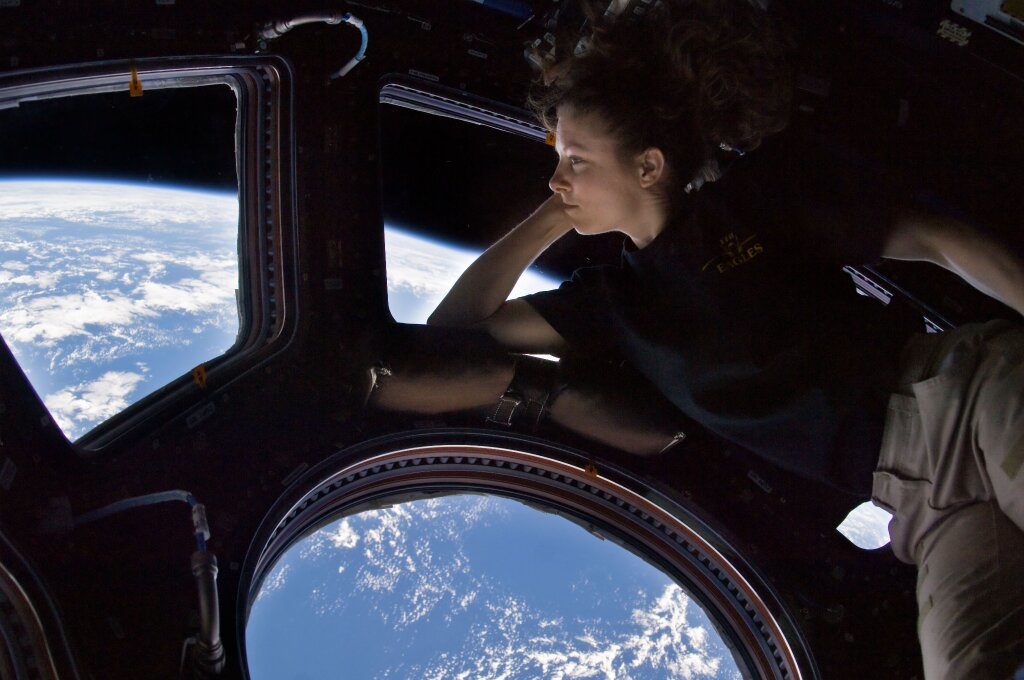 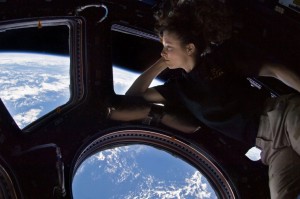 Midway through last week’s brutality and mayhem, 200 people got a radically different global perspective when an astronaut showed up in northeast Atlanta.

Speaking to mostly schoolchildren and their parents at the Fernbank Science Center on April 18, Tracy Caldwell Dyson described peering out of the cupola of the International Space Station to the blue-marble Earth and a three-dimensional universe.

Her eyes filled with tears, but tears don’t fall in space. Hers stuck to her eyeballs. Through that film, her view of our planet and its people deepened, to greater care and hope.

“Pretty soon you realize the things that you’re mad at each other about and other countries over just really are not that important when you see how beautiful and precious and plump this planet is that you live on,” she told the crowd, gathered three days after the Boston Marathon bombings and a day after the plant explosion in Texas.

NASA sent Dyson and other astronauts and scientists to Atlanta last week to promote the beleaguered space program. The agency’s traveling exhibit, “Destination (Space) Station,” will be on display until May 18 at Fernbank Science Center, which has battled to keep its planetarium and doors open.

Both publicly funded entities are trying to inspire support by transforming public opinion. NASA has a mission to reach far into the universe; Fernbank’s is to spark the boundless imaginations of children and instill in them a passion for science. Both are trying to preserve their missions for future generations amid an ever-present threat of budget cuts.

They want to fire up more kids like Qayl Maherali, 9, of Lawrenceville, who came with his dad Azeem and hopes to be an astronaut one day. They witnessed the last takeoff of the space shuttle Atlantis, visited the Alabama Space Center, seen other shuttles in museums in Washington, D.C. and New York City. Qayl has collected autographs from several astronauts, including the second man to walk on the moon—Buzz Aldrin. 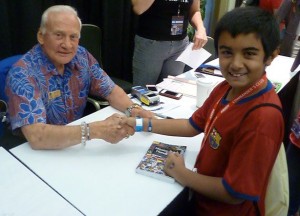 Qayl hopes to be an astronaut one day and already knows a lot about space even though he has yet to travel there. The lack of gravity alters human taste buds, so a favorite food on earth may be disagreeable in the cosmos—and vice versa.

“Everybody in space loves shrimp,” said Qayl, “whether you like it on Earth or not.”

The biggest link between NASA and Fernbank is astronaut Shane Kimbrough, who went to Lovett School and Georgia Tech and spoke to children at the science center on April 16. The next day there, school kids chatted by satellite link with astronauts on the space center. 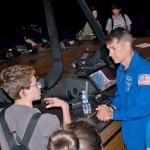 NASA’s share of federal spending has declined steadily since the 1960s. The agency, which took this nation to the moon and back six times in less than four years, today accounts for less than one half of one percent of the federal budget, roughly the same as it did in 1960, one year before the first U.S. astronaut blasted into space. Since 2010, the agency’s budget, currently at $17.8 billion, has been cut by more than $900 million.

Fernbank, which is owned and operated by DeKalb County Schools, is facing budget scrutiny again, one year after the local Board of Education announced it was considering closing the facility to cut costs. The announcement sparked howls of protests from the community, which prompted the school board to drop the idea.

However, the board voted to slash the center’s funding by more than half from $4.7 million to $1.9 million. 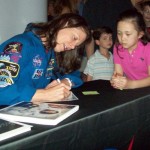 But that reality seemed far, far away at An Evening with an Astronaut. Kids like second grader Sofia Nadler were amazed to watch Dyson’s 21-minute video of the astronauts doing flips and sitting upside down in the anti-gravity environment of the space station.

The video also makes a vocal connection to Atlanta as Dyson and another female astronaut duet on “Closer to Fine,” the hit by the Indigo Girls, who grew up not far from Fernbank Science Center.

Meeting an astronaut “is a little bit astonishing; at the same time, amazing,” said Sofia, 8, who goes to Mountain Park Elementary School in Roswell. A budding astronomer, she was thrilled to get a signed photograph and her picture taken with Dyson.

During a week when the world felt upside down, the astronauts grounded these school kids with remarkable facts of space travel.

“Did you ever feel upside-down?” Sofia asked Dyson.

“Very good question,” Dyson replied. “The answer is no, because when you’re up in space your body no longer can sense up or down.

“When you’re in a swimming pool, you feel like you’re floating, but you’re actually just buoyant. If you were to dive into a pool you’d still know down was there and up was there,” Dyson said. “But in space you don’t.”

Like NASA and Fernbank, Dyson had to persevere to reach her goal. 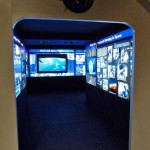 An interactive exhibit, “Destination (Space) Station,” is at the Fernbank Science Center until May 18. NASA uses this exhibit to promote space travel and science learning.

She decided on her career when she was a bit older than her Atlanta audience. Dyson was a 16-year-old daughter of an electrician in Beaumont, Calif. when teacher Christa McAuliffe was named to the space program. If an ordinary teacher could go into space, Dyson said, why couldn’t she?

McAuliffe was one of seven crewmembers killed in the 1986 space shuttle Challenger disaster, but that tragedy did not deter Dyson.

Each team of astronauts is named for an animal.

“You had the Bugs and the Peacocks and the Banana Slugs, the Hogs,” she said. “You name it, all sorts of fun names.”

So it was not a good sign that her team was the Penguins, after a flightless bird. “Because the line [waiting for space travel] is so long, you will never get to fly,” she said.

But she did fly.

In 2007 she flew on the space shuttle Endeavour as a mission specialist. In 2010 she was a flight engineer for Expedition 24 of the International Space Station, and spent 176 days on that mission. In total, she has spent more than 22 hours in space walks, including her tense first one to repair a potentially dangerous ammonia leak.

Persistence led her into the cupola.

Seeing Earth was a “reverent, religious” experience that shouldn’t be restricted to a privileged few, she said. If NASA and Fernbank can reach kids and public officials, the generation of Qayls and Sofias will have a better chance of seeing the world as space travelers like her.