The Atlanta BeltLine may be the third rail in this year’s city politics, as well as a near mystical vision so deep in the city’s psyche that failure to fulfill could be disastrous – the very definition of “too big to fail.” 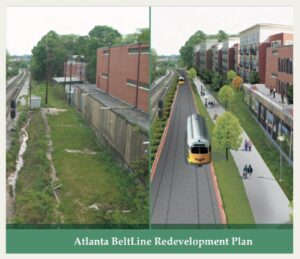 The Atlanta BeltLine Redevelopment Plan, of 2005, continues to inspire dreams the BeltLine’s transit and trails and developments will combine to create a Xanadu in the city. (Cover image of 2005 report prepared for the Atlanta Development Authority, now DBA Invest Atlanta)

This situation creates dangerous politics for future office holders who are to be elected in a few weeks. A key task of the next four years will be to downsize public expectations, and redefine success, for a project that isn’t close to raising enough tax revenues to create all the public amenities that were promised for substantial completion by 2030.

The BeltLine’s total cost was projected in 2005 at $4.8 billion. About $500 million had been spent through 2017, according to the latest available report from the Federal Highway Administration. This needle has moved some since 2017, with new public and private developments and two new taxes imposed since 2016 – a sales tax of 0.5 percent through 2040 approved in 2016 by Atlanta voters; and a property tax hike imposed this year by Atlanta on commercial and multifamily residences within a half-mile of the BeltLine. The new taxes were presented as a way to address shortfalls in the BeltLine’s 2005 self-funded revenue plan, a tax increment financing plan that uses taxes on new development to pay for public amenities. 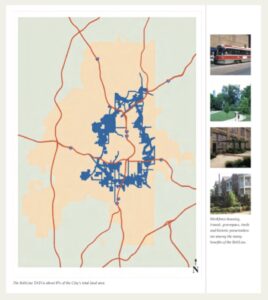 The special tax district marked in blue is to create revenues to pay for the Atlanta BeltLine’s public amenities, including affordable housing, transit, greenspace, historic preservation and more. (Image from the Atlanta BeltLine Redevelopment Plan)

BeltLine Rail Now is a nonprofit with an agenda that matches its name. BRN conducted a survey of candidates for Atlanta City Hall. Last week it announced results of what it calls a scorecard. Questions covered the waterfront. BRN did not conceal from candidates its focus, which on the scorecard is so defined:

Mayoral candidate Andre Dickens ($199,072) did respond and said he thinks transit trips should be free, including on the future BeltLine system: 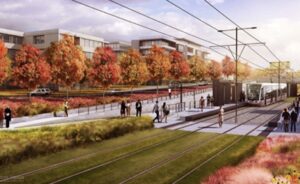 Warm colors were chosen for this rendering of the Atlanta BeltLine, replete with a transit system that is not fenced to prevent collisions that could cause injuries or death for people or pets, and lined by trees that look alike. (Image from Federal Highway Administration)

In another response, Dickens does not appear to indicate the source of money to build a BeltLine transit system. City Hall corruption from “the previous administration” is to blame for reasons that do not appear to be explained, nor does the comment address the fact that MARTA, not the city, oversees the BeltLine transit project: 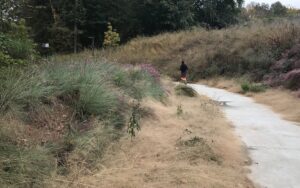 This approach to the newly opened Southside Trail reminds that developers have not yet flanked the path with residential or commercial projects, as they have along other trail segments. (File/Photo by David Pendered)

Some dreams of the BeltLine woven for the public in 2005 and 2006 are long forgotten. Funding for new high school stadiums, for instance, was part of the original funding concept. The idea was for students to use the BeltLine path and transit to travel to various facilities to be built with the fountain of property taxes to be generated by new development along the Beltline. Those plans were halted. On Nov. 2, voters can authorize some improvements for sports facilities, about $30 million, by extending the 1 percent sales tax for education, which aims to raise in five years a projected total of $650.8 million. 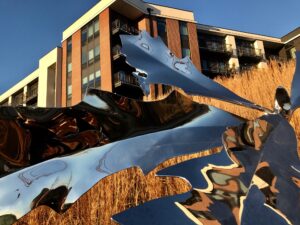 The Atlanta BeltLine’s Eastside Trail is bordered by an ever-increasing number of developments and the affluence to install public art. (File/Photo by Kelly Jordan)

Other dreams remain alive, and these present political dangers because constituencies do remember and advocate for promises to be fulfilled. These dreams have lifted the city through the Great Recession and the COVID-19 pandemic. These are the dreams that are too big to fail.

In the late autumn month of November 2005, the first full redevelopment plan for the Atlanta BeltLine was unveiled. It presented a comfortable lifestyle in a forested city filled with greenspace. Live-work-play destinations would be just a transit ride away on vehicles that weren’t selected, but presumed to be streetcars operating on tracks. Traffic congestion and parking woes would become less troublesome, because cars would become more an option than necessity and more people would walk between homes, shops and workplaces. Almost everyone would be able to find an affordable place to rent and call home. And jobs, thousands and thousands of jobs along the BeltLine – “more than 30,000 permanent jobs and 48,000 year-long construction jobs,” according to the redevelopment plan (page 1).

All these appendages have accumulated to create the BeltLine of today: A linear path with new parks and greenspaces, flanked by some affordable housing and also by some of the more expensive residential and commercial real estate in the city. And many promises, as yet unfulfilled.

This is not the Xanadu sketched in the halcyon days of the Atlanta BeltLine. The real BeltLine has morphed into something different from Ryan Gravel’s masters thesis, of 1999. Different from the vision of New York planner Alex Garvin, who was retained by the Trust for Public Land to expound on Gravel’s concepts and in 2004 came up with the “Emerald Necklace” idea of nodes of parks strung on a transit loop. Nor is this BeltLine close to the vision forecast in the redevelopment plan led by the former EDAW, Inc. which among a litany of projects around the world designed Atlanta icons including the parkland along Freedom Parkway, and Centennial Olympic Park and its famed fountain. 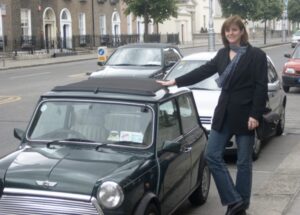 Alycen Whiddon, a former Atlanta staff planner, collaborated to create a rails-to-trail proposal that Atlanta adopted in 1993. Years later, the concept became the Atlanta BeltLine. Whiddon is pictured in Dublin, Ireland in 2006 or 2007. (Photo posted by Don Rickert on Whiddon’s legacy page)

Take away the new buildings along its borders and the BeltLine path is akin to the 1993 vision of Alycen Whiddon, a former Atlanta staff planner, and Ed McBrayer, of the PATH Foundation. Whiddon worked for Leon Eplan when he was Atlanta’s planning commissioner. In 1993, Whiddon convinced city leadership to include in “The Parks, Trails and Greenway Plan,” which became an element of the city’s Comprehensive Development Plan, the rails-to-trails concept she and McBrayer had devised for the out-of-use railroad tracks that circle the inner city. This story, long an urban legend, was documented (page 132) in the “BeltLine Precursors” section of “Atlanta’s Olympic Resurgence,” by planners Mike Dobbins, Eplan, and Randall Roark.

Whiddon died Aug. 16, and among the tributes on her legacy page is this: