The planned commercial airport in Paulding County won’t do well in the competitive airline business, the chief of Atlanta’s airport on Wednesday told members of the Georgia Chamber of Commerce. 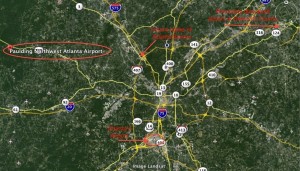 “The possibility of a second airport thriving is not so likely,” Louis Miller, general manager of Hartsfield Jackson Atlanta International Airport, told a group gathered in Atlanta for the annual State of the Ports Luncheon and Transportation Conference.

Hurdles at the proposed commercial airport include high operating costs for airlines, the trend toward bigger jet aircraft, and the history of aviation that favors new airports being built to relieve crowding at  smaller, older airports, Miller said.

“Airlines operating there [would face costs of] $50 per passenger,” Miller said. “At Atlanta, it’s $5.50. So, would airlines select it as a location?”

Miller spoke during his portion of a panel discussion titled, “Planes Trains and Economic Development.” Miller covered a lot of ground in his allotted time on a panel he shared with representatives of Norfolk Southern and the Georgia Center of Innovation for Logistics. 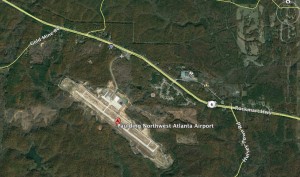 Click on the map for larger view: Paulding County officials intend to lengthen the runway of the county-owned airport in order to attract commercial airline service. Credit: Google Earth

Miller said the trend in aircraft in the aviation industry is to move more passengers with fewer planes. That means bigger jets.

“The industry is moving from regional to bigger jets,” Miller said. “You can see the rebalancing in the utilization of aircraft.”

Miller said the history of airports shows that communities tend to start with one airport, and add a second facility as the first airport becomes overburdened.

“In Chicago and Dallas, and with other airports, they had a smaller airport and built a bigger one,” Miller said. “I know what they’re talking about in Paulding County would be interesting to see. But limits to capacity would drive that back.”

Paulding County is moving aggressively to develop a facility that would be metro Atlanta’s second commercial airport.

The concept is similar to one that Gwinnett County residents defeated when the airport near Lawrenceville was targeted for expansion to serve commercial passengers. Advocates think a market exists in Atlanta’s suburbs for passengers who don’t want to use the world’s busiest passenger terminal.

To further the plan, Paulding County’s board of commissioners approved last month a $3.4 million bond to pay to extend the taxiway. A few residents have filed a lawsuit to halt the sale and the matter now is in litigation, according to ajc.com.

Previous Article
No minds are changed in Braves stadium meeting with Gov. Deal
Next Article
Falcons funding deal oh so close, but politics and opposition could extend debate into first quarter of 2014