Atlanta is one of six cities HUD has chosen as finalists for a federal Choice Neighborhood grant that would provide Atlanta with up to $30 million to improve three impoverished neighborhoods. 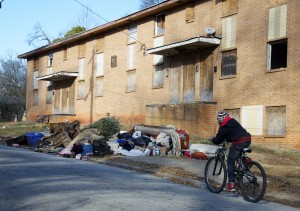 Vine City is one of three neighborhoods that are to be improved if Atlanta wins a grant of up to $30 million from HUD. File/Credit: Donita Pendered

Atlanta would target the money on three neighborhoods west of the future Falcons stadium. The potential federal grant is separate from the $30 million already promised to the area by Atlanta and the Blank Family Foundation.

Atlanta Mayor Kasim Reed’s office announced the city’s status as a finalist for the grant on March 18, the same day it issued a statement from the mayor that responded to a March 13 story in saportareport.com.

The story reported on the first report the Atlanta Housing Authority has made to HUD since former AHA CEO Renee Glover left the agency after a public dispute with the mayor.

The story reported the AHA statement to HUD that: “AHA is not proposing any new initiatives in FY 2015.” The story also noted the AHA report to HUD said the agency intended to provide a portion of the former Herndon Homes housing site for use by the Falcons as a parking lot.

Reed’s statement contends the story’s headline and characterization of AHA were baseless:

The Choice Neighborhood program has been described as an expansion of the HOPE VI program. Atlanta was a national leader in using HOPE VI funds to replace many blighted public housing projects with mixed income communities. The Choice Neighborhoods program intends to promote a comprehensive approach to turning concentrated poverty into mixed income communities, according to HUD, the U.S. Department of Housing and Urban Development.

If Atlanta is selected for the Choice Neighborhood grant, it would join previous winners including Boston, Chicago, Cincinnati, New Orleans, New York, San Antonio, San Francisco, Seattle (twice) and Tampa. Most cities have received close to $30 million from a total allocation of $244, according to HUD.

“The Choice Neighborhoods Implementation Grant presents a unique opportunity to continue the positive transformation of the City of Atlanta’s public/private housing communities,” Reed said in a statement. “I believe Atlanta already has a well-established track record of restoring our most depressed communities, and hope we can build on that momentum. I’m pleased that we have been selected as a finalist and am committed to working together with AHA to see this to fruition.”

The Choice Neighborhood grant focuses on Vine City; the Atlanta University Center; and Ashview Heights, which is located south of Martin Luther King Jr. Drive between Joseph E. Lowery Boulevard and the railroad corridor that now is a path of the Atlanta BeltLine.

The pending grant is one of two that Atlanta and Morehouse University have been pursuing to raise the quality of life and educational opportunities for residents of the worn area west of the future stadium.

Morehouse University previously won a $500,000 planning grant Promise Grant from the U.S. Department of Education. The grant created the Atlanta Promise Neighborhood, sometimes called “College Town,” to promote educational and developmental opportunities for young people in about a 6-square-mile area around Morehouse.