This story has been updated to correct the originator of an idea regarding storm water harvesting from Ga. 400.

As the state moves ahead with plans to build water reservoirs, Atlanta is proceeding with efforts to make better use of rainwater that falls over the city. 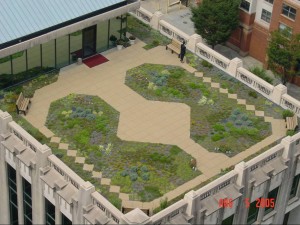 On Nov. 27, if all goes as planned, the city’s long-awaited proposal to improve the management of storm water is to get its first hearing by the Utilities Committee of the Atlanta City Council. Advocates hope the council will enact it early next year and Mayor Kasim Reed will sign the legislation.

In addition, lots of blue sky ideas emerged after a presentation by Denise Quarles, Atlanta’s sustainability director, at last week’s meeting of SERHAS – including this one from Norman Koplon, the city’s long-time director of buildings: Why not catch storm water that runs off Ga. 400, south of the tollgates, and use it to irrigate the new plantings along Peachtree Road?

“What better demonstration project could there be than the state doing it, itself?” Koplon remarked after the quarterly meeting of SERHAS – Southeast Rainwater Harvesting Systems Association. “The water’s clean, and could be piped into a system for irrigation for the beautiful landscaping that’s been installed.”

Another enthusiast has a similar idea for catching the storm water that runs off the parking lot in the Midtown Place shopping center, located across Ponce de Leon Avenue from the planned Ponce City Market development. He had no time to elaborate because he was working swiftly to find someone from Home Depot – an anchor tenant at Midtown Place – for a discussion as the crowd headed for the door.

Georgia, meanwhile, is pursuing a plan to meet Georgia’s water needs through construction of new reservoirs. The Metro Atlanta Chamber has endorsed Gov. Nathan Deal’s concept of reservoirs; Deal’s plan is for the state to contribute $300 million over the course of four years toward the development of reservoirs in Georgia.

The ideas of harvesting storm water off highways and big parking lots, offered by Koplon and others, are broader than the current focus of SERHAS. The non-profit is working toward greater use of rain barrels by homeowners as an achievable first step in wide-spread adoption of rainwater harvesting systems.

An example of that exists in Tucson. The city government there has implemented a cash award of $300 for homeowners who install a rainwater harvesting system. The program has been embraced so heartily that related workshops for interested homeowners are booked full through the year.

Atlanta doesn’t offer a cash award, but did enact legislation in 2011 that aims to clarify the city’s codes on rainwater harvesting. The new code created a fee and regulations for the collection of potable rainwater. Part of the goal was to allow for the unfettered use of rain barrel systems, advocates said at the time.

But few – if any – homeowners have jumped on the bandwagon.

Quarles’ PowerPoint presentation observed that: “Stakeholders have yet to take advantage of it. A campaign is now needed to educate and engage.”

That’s where the SERHAS campaign comes into play.

The objective of the current campaign is to boost the rate at which rainwater harvesting systems are adopted. The stated challenge is: “It’s been achieved elsewhere … why not here?” Success is defined as: “ Public awareness; Government policy; Standards to assure reliable systems.”

The city’s proposed post-development storm water management ordinance fits into the category of “government policy.” The proposal has been in the works for a few years, and the current version has been drafted with input from the development community.

The latest version of the plan is dated Oct. 3 and includes a number of refinements. The ordinance would apply to both commercial and residential properties.

Click here to read a summary of the proposed changes.