Atlanta Mayor Kasim Reed is among President Obama’s biggest supporters, but that didn’t stop a city entity that’s chaired by the mayor from renting office space in a skyscraper that’s partly owned by two of Obama’s wealthiest opponents.

The city’s development arm, Invest Atlanta, has approved a 13-year, $5.7 million lease for office space in the Georgia Pacific building, in Downtown Atlanta. The lease is three times the $1.9 million that Invest Atlanta would pay to stay at Underground Atlanta, according to a fact sheet from Invest Atlanta. 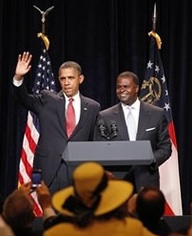 President Obama and Mayor Kasim Reed were together in March, during an Obama fund-raising trip to Atlanta. Credit: kasimreed.cm

The iconic skyscraper is owned by Georgia Pacific and others, according to Fulton County tax records. Georgia Pacific is wholly owned by Koch Industries, whose two billionaire owners oppose Obama’s reelection and support conservative candidates.

In moving from offices at the city-owned Underground Atlanta, Invest Atlanta is fulfilling Reed’s statement last June that it would: “Have spaces that are much more worthy of economic development … and be more conducive to sending a real signal of how serious we are” about economic development.

Click here to read the fact sheet from Invest Atlanta.

Invest Atlanta decided against moving into several other prospects including:

The two Koch brothers who oversee the family-owned conglomerate provided seed funding for an organization that became Americans for Prosperity. The brothers have been associated in Libertarian Party affairs and have relations with the Cato Institute, according to published reports.

The amount the Koch brothers have donated to AFP is unknown because of the rules of reporting requirements, according to published reports. 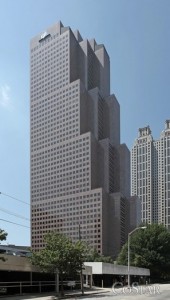 Invest Atlanta intends to take a 13-year lease for the 29th floor of the Georgia Pacific building. The 191 Peachtree Tower is in the background. Credit: CoStar

AFP is spending millions of dollars to defeat Obama and other Democrats. A May 2 report in Forbes.com showed AFP has spent more than $12 million for attacks exclusively on Obama’s energy policy. AFP’s expenditure in that campaign alone was twice the amount spent to date on advertising by the Democratic National Committee, Forbes.com reported.

AFP’s website has a petition titled “Stop Tanking America.” The site links to an ad that dissects the $831 billion stimulus package and includes this call for action: “It’s time the White House stopped tanking American growth in favor of partisan politics.”

As Atlanta’s mayor, Reed serves as chairman of Invest Atlanta. Reed’s spokeswoman did not respond Monday afternoon to requests for comment about the lease.

Reed did not attend the May 17 meeting at which Invest Atlanta’s board approved a resolution to finalize the deal to move to Georgia Pacific, according to minutes of the meeting. Nor did the mayor attend any of the authority’s three meetings this year, from January through May, during which time the negotiation for space at Georgia Pacific was underway.

However, Reed fully supported the lease and was kept in the loop, according to minutes of the May meeting that indirectly quote Ernestine Garey, Invest Atlanta’s executive vice president and COO.

According to the minutes, board member “Julian Bene asked Ms. Garey whether or not the Mayor has consented to the GA-Pacific lease. Ms. Garey said yes. She stated that senior management has met with the Mayor approximately four (4) times to discuss the GA-Pacific lease issue specifically. She reported that the Mayor is aware of the thirteen (13) year lease and is in full support.”

The minutes show the board’s secretary, Joe Brown, questioned the lease approval in the absence of the mayor and Councilmember Joyce Sheperd, who serves on Invest Atlanta’s board by virtue of her chairmanship of the council’s Community Development Committee.

According to the minutes: “Mr. Brown asked whether the Resolution approving a new office location is time-sensitive and needed approval today. Ms. Garey answered and stated that time is of the essence due to GA- Pacific holding the space for occupancy for Invest Atlanta.

“Mr. Brown also stated that he would feel more confident in having Mayor Reed and Councilmember Joyce Sheperd’s endorsement on a thirteen (13) year lease.”

The board approved the resolution authorizing the lease to be finalized.

Reed’s campaign website notes that he restructured the Atlanta Development Authority into Invest Atlanta in order to modernize the ADA. In Reed’s state of the city speech in January, the mayor said Invest Atlanta would promote job creation.

Reed’s has had his eye on new office space since at least June 22, 2011, when he told the ADA board that the ADA staff should consider moving to the building that formerly housed The Atlanta Journal-Constitution, which was donated to Atlanta. The ADA is located in renovated office space above Underground Atlanta.

“I’m very serious about this entity being the primary development arm for the city,” Reed said at the June, 2011 ADA meeting.

“One way or the other, I’m going to get the result I want, whether that’s here or somewhere else,” Reed said. “The problem with this building, with the leaking and all the rest, [is that] we can’t be first class.”

The skyscraper is Class A office space, with attached parking and enough services in the building that the city’s development team will never have to step out onto the street.

The building offers banking, a dry cleaner, fitness center, food service and a restaurant, according to the commercial property site showcase.com.