Atlanta and Bogotá: What can our transit learn from each other

Driving through the streets of Bogotá. (Photo by Mark Lannaman.)

During my trip to Bogotá, I found that it and my home city of Atlanta can learn a lot from each other’s ideas when it comes to transit.

The cities of Atlanta and Bogotá are quite different. Bogota is one of the largest cities in South America, with a population around 8 million and a metro area population of around 11 million. In contrast, the City of Atlanta only has around 500,000 residents. This puts Atlanta at the 37th largest city in the United States. Interestingly enough, however, the Atlanta metropolitan area is the 7th largest in the nation with a population around 6 million, beating the likes of Philadelphia and Washington D.C. This is largely attributed to the way Atlanta and Metro Atlanta are set up, with a vast majority living outside the city but entering the perimeter to work and have fun.

Given this, it’s no surprise Atlanta is notorious for traffic congestion. And while it’s not exactly the same as Bogotá, there are things that each city can learn from the other.

You cannot understand transportation in Bogotá without first understanding Pico y Placa, a program put in place to get cars off the road and people into public transit.

In order to mitigate the traffic in one of Latin America’s biggest cities, Bogotá turned towards Pico y Plata — a system that was established in the late 1990’s. In short, the system regulates traffic on weekdays (Monday through Friday) by restricting certain cars on the road on certain days, depending on the last digit of your license plate.

For example, a place ending in an even number could drive Monday but not Tuesday then again Wednesday but not Thursday and so on and so forth. Weekends are open for everyone.

Hearing this idea while stuck in one of  Atlanta’s frequent traffic jams sounds tempting. In reality, though, implementing something like this in Atlanta would be tricky. Beyond the assured outrage there would be from those feeling like the government is imposing far too much on their freedoms, Atlanta doesn’t have a robust enough public transit system to work effectively. Atlanta is a car-centered city, and this would only change in a stronger investment in public transit— like the investments Bogotá is slowly making.

Bogotá debuted its bus rapid transit system, the TransMilenio, in 2000. There are currently 12 lines throughout the city, with recently updated buses, new lanes, and improving routes.

The TransMilenio comes with its own lanes for travel and articulated buses, which are buses with a flexible part in the middle to allow longer buses to turn more easily.

Atlanta has its own buses, part of the MARTA system. But to be a true effective form of mass public transit in Atlanta, it would be necessary that these buses serve more people through new lines, particularly lines that stretch further in and around Metro Atlanta.

The TransMilenio in Bogotá is by no means a perfect bus system. There are regular complaints of it being overcrowded. One plus of the TransMilenio, though, are its “alimentadores” or feeder buses. These are smaller buses that act as bridges between the different TransMilenio stations and neighborhoods. In other words, these smaller buses take passengers from the big stations into different neighborhoods of Bogotá that the large lines don’t reach.

This “last mile” problem is crucial in large cities like Bogotá, especially for vulnerable individuals where walking to a bus stop is especially dangerous. For a city without a metro train system, it makes sense. It solves one of the biggest complaints of Atlanta’s MARTA buses and trains: they only get you to a general location. Getting right where you need to be proves difficult for many riders of MARTA.

Atlanta could seemingly learn from this example by adding their own version of a “last mile” vehicle. Though given the traffic in the city, many argue that we don’t need any more buses that don’t generally have dedicated lanes to go faster than other vehicles like the TransMilenio has. Instead, many advocate for the implementation of light rail, to act as the “alimentadores” or last mile connectors. Just this past February, Former Mayor Keisha Lance Bottoms tweeted her dissatisfaction for MARTA moving forward with plans of bus rapid transit instead of light rail. MARTA argues the bus rapid transit and light rail serve the same purpose, with BRT being cheaper and only slightly slower.

On the topic of dedicated lanes, Bogotá excels in bicycle friendliness. Like most of South America, fútbol dominates sports. But when I talked to the residents of Bogotá, I found that cycling is a close second.

Bogotá has a wide network of “ciclovías” or bike lanes throughout the city. According to the World Health Organization, its bicycle system is one of the world’s largest.

This is a far cry from Atlanta’s where dedicated bicycle lanes are few and far in between, especially in lower income neighborhoods, which is ironic, considering a bicycle is a more affordable solution to transportation than a car for a lower-income resident.

I would be remiss not to mention the Atlanta BeltLine when talking about lanes not meant for automobiles. It’s true that the BeltLine has been developing around the city. Generally speaking, residents of Atlanta enjoy the BeltLine and all that it offers around it, but it is not yet at a point where it can be a reliable method of transportation throughout the city. Its design was more to go around the city than weave throughout it. So while upon completion the BeltLine will undoubtedly be a bicycle friendly space, it is not currently tracking to be the solution for those who exclusively ride bikes. Leadership has taken measures to reach out towards Metro Atlanta, most notably a connecting trail with Cobb County’s Silver Comet Trail. More of these kinds of connectors will be needed for cyclists to rely on the Beltline as a method of transit in Atlanta.

Bogotá can take note from the Atlanta BeltLine and how it can not only be a method of transit, but also a tool to energize and invest in the neighborhoods around it  through stores and restaurants. In turn, Atlanta can learn the value of investing in a sustainable method of transit like cycling by dedicating more lanes to it — especially in lower income neighborhoods — even if it is not an extension of the BeltLine that will generate large amounts of profit.

The City of Bogota isn’t solely looking towards buses or cycling for its future, though. A metro system is currently under construction, slated for completion in 2028.

The metro will be the first of its kind in Bogotá. Other cities like popular tourist-destination Medellin already have metro transit.

In contrast, Atlanta has had a metro system for decades. To be truly effective, however, Bogotá must make sure it learns from successful and unsuccessful instances of metro lines.

MARTA has long been criticized for not going far enough. As discussed earlier, only a few stations reach outside the perimeter into Metro Atlanta. What’s more, because of the way Atlanta is built, there are parking decks at many of these MARTA stations so that residents can drive to a station and board. Although ironic, Metro Atlanta is so spread out that unless a station existed in every corner of Metro Atlanta, this is probably the most effective way to encourage residents to take the metro into the city.

MARTA also only has four lines and 38 stations. The only place to switch from a Blue-Green route to a Red-Gold is at the largest station, Five Points.

Depending on where you live and work, the MARTA system isn’t a failureIt is entirely possible to use MARTA as your only means of transportation, and a ride share service to get to miscellaneous locations. Sure, the system could expand to places like The Battery in Cobb County where the Atlanta Braves play, or to Atlantic Station.

Many criticisms stem from the fact MARTA hasn’t built any new rail lines in over two decades, and in the past two decades the city has grown to be a powerhouse of the country, with a growing tech scene, numerous Fortune 500 companies, and even the title as the “New Hollywood”. But as the old saying goes, “If it ain’t broke, don’t fix it.”

It’s when Metro Atlanta is taken into account that MARTA begins to fall apart. The lack of new rail lines built in a city that is projected to add nearly 3 million people to the metro area by 2050 is concerning. 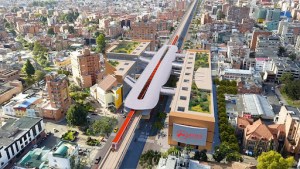 Bogotá, as a larger city than Atlanta, can take note of this. The current metro project under construction will have one line upon completion, with 16 stations and 10 to be integrated with the TransMilenio bus system. As a start, this looks promising. 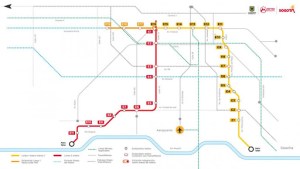 It will be imperative that Bogotá continues to build more metro rail in the future, and use the TransMilenio in conjunction with the metro to take riders that final distance from their stop to a station.

Both cities suffer from major traffic congestion, and as each grows in a way more suitable for itself, it would be a mistake not to take note from each other and work towards implementing similar systems in the respective city. Transit leaders need to learn from the transit successes and failures of different cities. If they can do that, they can develop cities that are not reliant solely on automobiles and offer alternatives for different lifestyles within a city, which will strengthen their city overall and make it more welcoming to various people.