A concessions contract for the largest revenue producer for Atlanta’s airport is up for grabs even as the city auditor has just delivered a critical report on the effectiveness of the current management firm and its city contract. 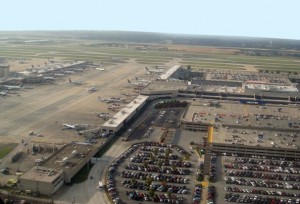 Parking fees collected at Atlanta’s airport provide 1/4 of the airport’s revenues, according to a recent city audit. Credit: book2park.com

The parking contract for Atlanta’s airport represents ¼ of the airport’s annual revenue. Parking fees alone bring in $117 million in revenue for fiscal year 2013, according to city Auditor Leslie Ward.

Parking is big business all across the country. The company that now handles the parking decks at Atlanta’s airport, SP Plus Corp., is based in Chicago, has more than 25,000 employees, and manages parking at facilities in the U.S., Canada and Puerto Rico, according to the annual report it filed with the federal Securities and Exchange Commission.

Ward has presented an audit that suggests the parking contract was a bit unusual, compared to other city contracts her office reviews.

Evidently, the contract had evolved in a way that shifted a greater amount of risk from SP Plus Corp. onto the airport.

Miguel Southwell, whom Atlanta Mayor Kasim Reed named in May as the airport’s general manager, said the audit’s observation should be considered in the context of the size of the parking spaces at Atlanta’s airport..

Southwell contended SP Plus Corp. has done a good job of handling the airport’s money. However, the audit did indicate that deposits were not always made as promptly as required.

Southwell did not specifically address the contract issues Ward raised. He did respond to the audit’s observations that SP Plus Corp. has not fulfilled its contract obligations in regards to speeding vehicles through airport parking pay gates.

Ward delivered a routine audit of SP Plus Corp.’s handling of its duties as part of her office’s routine oversight. Ward said the audit had commenced before Southwell had taken control from former GM Louis Miller.

The city audit revealed that parking attendants did not provide a level of customer service that fulfills all the requirements of the existing contract. Ward delivered an oral presentation of the audit last week to the Atlanta City Council’s Transportation Committee.

Coincidentally, SP Plus’ contract expires at the end of the year. Southwell said all the concerns raised in the audit will be addressed in the new contract. Ward said she and her office are available to help.