An internal city audit of rates charged for Atlanta’s water and sewer services presents findings that show Mayor Kasim Reed should be able to fulfill his vow to not seek a rate hike before 2016.

The audit also confirms the widely held opinion that Atlanta has the highest water and sewer rates in the country. 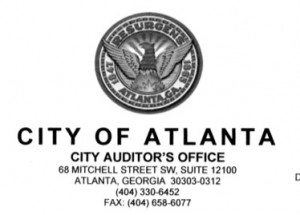 Atlanta’s city auditor has issued a report on water rates.

The findings comprised the first of two pieces of good news for consumers. A federal court last week approved a 13-year extension of the city’s timeline to complete required upgrades to the sewer system. The approval of the extension, to 2027, was forecast in a May 31 press release from the federal Environmental Protection Agency.

Reed issued a statement that portrayed the court ruling as a win for consumers, and he gave a nod to former Mayor Shirley Franklin – who initiated the sewer upgrade program after decades of neglect.

“This extension will allow us additional time to finish necessary repairs to our sewer system while also keeping our water and sewer rates flat,” the statement reads. “The tremendous work of my administration, the city council and my predecessor Mayor Shirley Franklin have all been instrumental in getting us to this point. I am also grateful to the court for its decision and all of our partners for their continued support.”

The audit was spurred by the city’s high water and sewer rates.

The first words of the audit are:

The words that matter most to most consumers are contained in these two sentences:

The main reason rates can remain at the current level for four more years is the passage in March of the 1 percent sales tax called MOST – municipal option sales tax. It generates about $100 million a year, which is about a third of the money Atlanta uses to pay for the sewer repairs.

City Auditor Leslie Ward delivered the audit to the Atlanta City Council in a letter dated Sept. 4, following its approval by the city’s five-member Audit Committee. The mayor serves on the committee as a non-voting member.

The audit acknowledges a number of uncertainties that could affect the city’s rates for water and sewer. Here’s what the audit has to say about them:

“Although we conclude that watershed management may be able to maintain current rates beyond 2016, factors outside the model create uncertainty. Bond refinancing would reduce the funds needed for debt service and therefore would reduce expenses. Drought conditions or water conservation efforts that typically lower water use would reduce collections and therefore require additional revenue.”