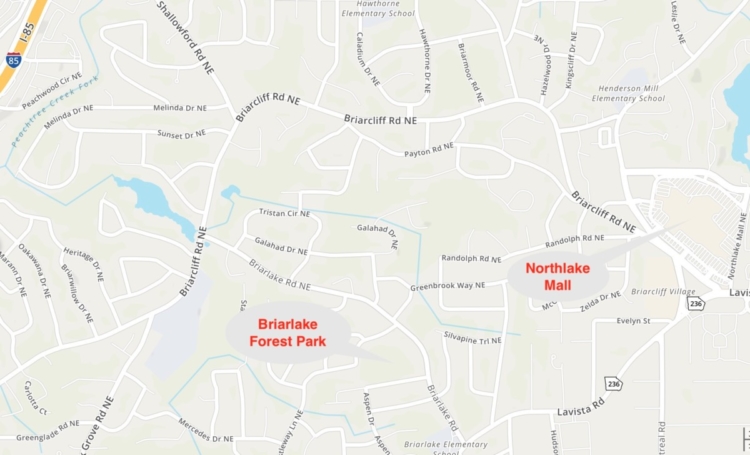 Briarlake Forest Park is the latest public park to be certified as a wildlife sanctuary by the Atlanta Audubon Society. The park is located near Northlake Mall, in DeKalb County. Credit: mapquest.com, David Pendered

The Atlanta Audubon Society has certified yet another public park as a wildlife sanctuary, this one near Northlake Mall in DeKalb County and the latest in the society’s fast-growing program to provide havens for birds and critters.

Briarlake Forest Park was certified following a collaborative effort by Atlanta Audubon and the Friends of Briarcliff Forest Park. The 21-acre forest may be best remembered as the last undeveloped piece of land on what once was a 100-acre private parcel.

This certified wildlife sanctuary is among more than 450 sanctuaries now named by Atlanta Audubon in the Atlanta area. The program once focused on establishing backyard sanctuaries, but has expanded under the guidance of Melinda Langston to include a fairly aggressive effort to include public parks. Langston is a board member of Atlanta Audubon who serves as the wildlife sanctuary coordinator.

The goal is to knit together a fabric of sanctuaries, helping to offset greenspace in metro Atlanta that has been lost to development. These sanctuaries provide food, water and shelter to birds and other animals whose former places of refuge are no more.

“The welfare of birds and other wildlife is directly linked to the quality of food and shelter available to them,” Langston said in a statement. “The hard work of the friends group has not only created valuable habitat for birds and other wildlife, but has also preserved this wonderful forest located in central DeKalb County for future generations.”

The wildlife sanctuary will serve as a place to educate children about the marvels of nature, and a place for adults to find refuge, Margo Reynolds, a member of the Friends of Briarlake Forest Park and Chair of the Grounds, Trails, and Maintenance Committee, said in the statement.

“Our goal is to maintain an environment that encourages protection for all of our bird species and other wildlife within the forest for generations to come and to educate our children about the value of having green space in our neighborhoods,” Reynolds said. “Having a 21-acre old growth forest in the middle of an urban community is a rare and beautiful asset and having the bird population that the forest supports is a testament to nature that is a joy to behold.” 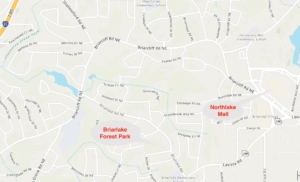 Briarlake Forest Park is the latest public park to be certified as a wildlife sanctuary by the Atlanta Audubon Society. The park is located near Northlake Mall, in DeKalb County. Credit: mapquest.com, David Pendered

Briarlake Forest Park is a few miles southwest of another park Atlanta Audubon has recently tended. Atlanta Audubon provided a grant that’s to help remove invasive species at Henderson Park, located a few miles northeast of Northlake Mall. The grant is to focus on the park’s Native Plant and Wildlife Walk.

DeKalb County’s Department of Recreation, Parks, and Cultural Affairs purchased the land that became Briarlake Forest Park in July 2015. The land came in the form of three parcels that the county bought with the intention of keeping it as greenspace, according to a report by Friends of Briarlake Forest.

The trajectory of Briarlake Forest Park from an place that needed attention to a certified wildlife sanctuary followed the path of other such designated sanctuaries in metro Atlanta.

The Friends of Briarlake Park worked with DeKalb County to remove the ubiquitous invasive plants that cover so much of the region – privet and English ivy. New plantings of native species include azaleas, autumn fern and blueberry bushes. Native grasses were added to provide food and cover for birds and other wildlife, according to a statement from Atlanta Audubon.

Friends of Briarlake Forest provide this history of the property: