The Atlanta Beltline is adding a half-acre of land to the city’s first BeltLine park, just as Atlanta prepares for the grand opening in September of two ball fields at the future green space.

The additional land at the Boulevard Crossing Park, located south of Grant Park, will improve access to a site that now covers about 21.2 acres purchased by the city in 2007.

The current acquisition is occurring as the city has secured an earmark for $600 million for the Beltline in the event that voters next year approve a 1 percent sales tax to raise $6.14 billion for transportation improvements.

The sales tax revenues for the Beltline would help pay for building a streetcar circulator and trail, according to the list of projects considered by the Atlanta Transportation Roundtable. 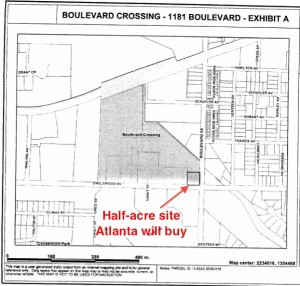 Atlanta is buying a half-acre of land to serve as a gateway to Boulevard Crossing Park. Credit: Atlanta City Council

The Atlanta City Council agreed to buy the parcel for a price up to $275,000, or fair market value, from Atlanta Beltline, Inc., according to the City Council’s papers. The city is using money it agreed to borrow in 2005 by selling bonds to improve the citywide park system.

The land purchase at Boulevard Crossing gives the park a full presence at the corner of Boulevard and Englewood Avenue.

“The park is shaped sort of like a triangle, and this is the point of the triangle,” said Ethan Davidson, spokesman for Atlanta Beltline, Inc. “It’s a very key parcel to have, in terms of being able to access the park when it’s built.

“This will make the park much more accessible,” Davidson said.

The site now has a lease agreement with Clear Channel Outdoor, Inc., formerly known as Outdoor Systems Advertising. There is no indication the city intends to try to break the lease.

Davidson said the grand opening event will launch two ball fields and related space that cover about 5 of the park’s 21.2 acres.

In keeping with surveys done at the outset of the city’s effort to build the BeltLine, one of the ball fields will be for unstructured play and the other for organized sports.

“One is a regulation size soccer field, where league use could take place,” Davidson said. “The other is for multi-use nature – rugby, frisbee, tag.”

Boulevard Crossing Park was acquired in 2007 by the city at a cost of about $9 million. The land was used mainly for light industry and commercial purposes. To fund the purchase, the city used bonds that were overseen by the Parks Department.