Editor’s Note: This story has been updated with new information from Atlanta. A total of 12 parcels are being proposed for condemnation.

Atlanta is preparing to condemn private property to further the development of the Atlanta BeltLine. 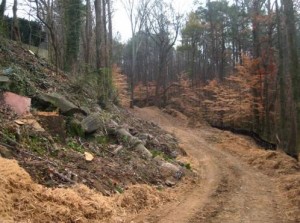 Although just a few acres are involved, this marks the first time Atlanta has exercised its power of eminent domain to develop a park or trail related to the BeltLine.

Condemned land will be used to expand Enota Place Park, in southwest Atlanta, which was one of the original 13 jewels in the “emerald necklace” vision of the BeltLine that was used to promote the concept in its formative days. The Southwest BeltLine Connector Trail will be built atop some condemned properties.

In all, 12 parcels are to be condemned – five along the Southwest BeltLine Connector Trail, and seven next to Enota Park. In each case, the city named a public purpose to justify its proposed taking.

The city is resorting to condemnation in order to provide additional greenspace in an area of the city that various studies have shown to be in need of additional greenspace. Atlanta intends to pay fair market value for the land, with the price established through the legal process, according to papers associated with the proposals.

One issue that makes this process notable is the use of condemnation of private property to achieve the public purpose of developing the BeltLine.

Georgia voters were so concerned about the issue of eminent domain that in 2006 they voted overwhelmningly to restrict government’s use of eminent domain. The ballot measure came on the heels of a 2005 ruling by the U.S. Supreme Court that determined condemnation was acceptable to promote redevelopment. Twelve states voted on similar legislation that year. 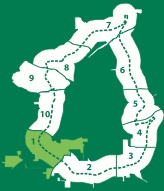 Atlanta has defined the BeltLine as a redevelopment project intended to eradicate blight. This stated purpose, to reduce blight, is part of the reason a portion of property taxes collected along the BeltLine can be used to build its parks and trails and other amenities.

According to legislation submitted by Mayor Kasim Reed’s administration to the Atlanta City Council, the land to be condemned for the trail is being taken for what is described as: “A public transportation purpose.”

City procurement officials tried, but failed, to acquire the parcels through “good faith” efforts, according to the legislation. The problems boiled down to: “Numerous issues including liens and other clouds on title.”

Georgia’s condemnation law includes title issues as an allowed use of eminent domain.

In the case of the land needed to expand Enota Park, the city and property owners evidently could not come to terms on the price. The legislation states:  “The city engaged in good faith negotiations with the owner of the property to acquire the property based upon a certified appraisal of the property … Condemnation … is necessary to complete the expansion of Enota Place Park.”

The public purpose of the condemnation is explained as: “Necessary for the expansion of Enota Place Park boundaries, which parcels will be possessed, occupied and used by the general public.”

Condemnation laws have long held “public use” as an acceptable purpose.

The timeline provided by the Reed administration calls for the proposal to be discussed Tuesday at the Atlanta City Council’s Community Development Committee. The committee could vote as early as July 9, which would enable the full council to vote on July 15.