Atlanta BeltLine now blogging to keep friends up to speed

The Atlanta BeltLine intends to tell more stories about itself and other neat urban developments through its new blog – atlantabeltlineblog.com.

“We’ll have more dispatches from the field,” said BeltLine spokesman Ethan Davidson. “More reports about things that are happening in other cities. A lot more information about the BeltLine and other related things that people might be interested in.”

The BeltLine already reaches a wide audience through its current social media. The new blog was introduced through a soft launch last month, and is slated to become a big part of the new, redesigned website the BeltLine plans to unveil by the end of March.

The address of the new site will remain beltline.org.

The blog and new website should help the BeltLine maintain enthusiasm among its supporters. Future news that doesn’t make print headlines, digital news sites, or the nightly TV news can be delivered directly to an engaged audience, complete with links to stories that show the BeltLine really does place Atlanta on the cutting edge of urban renewal.

After all, when Trust for Public Land started helping to acquire land for future BeltLine parks and greenspace, TPL had designated the BeltLine as its national model for expanding greenspace in densely developed cities.

Davidson sounds excited about the prospects of blogging about the BeltLine and other innovative urban developments. 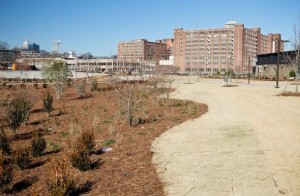 “Blogs allow you to go into slightly more depth that more traditional websites don’t lend themselves to naturally,” he said. “This is another channel for us to push information out to people. We’ve been using social media for a couple of years, and since 2010 we’ve seen readership in those area grow consistently.”

Davidson looks like he’s been having fun with the blog, posting stories and a lot of pictures by Atlanta photographer Christopher T. Martin.

The latest entry is an update on the expansion of the Historic Fourth Ward Park, most of which opened in Spring 2011. The newly opened piece extends the 17-acre park all the way to North Avenue. The presentation on the blog provides links to the BeltLine’s Facebook page, where more than two dozen of Martin’s photos (taken last week) are posted.

The park’s expansion evidently wasn’t reported by the Atlanta media. A Google search didn’t show any stories about it.

Earlier in January, the blog apprised readers about an update on the Beltline posted on Salon.com. That story, dated Dec. 31, profiled developments in seven U.S. cities that Salon lumped under this headline:

“The bold urban future: Cities are broke? Unimaginative? Hardly. From coast to coast, these 2012 projects will be transformative”

The story inspired one reader to comment: “I didn’t know about any of this and it gives me hope and pride in being an American.”

Before the Salon.com piece, the BeltLine blog highlighted a project in Madrid that involves burying a highway for more than six miles and using the ground for new parks, transit and trails.  The original story was published in The New York Times.

Read the first entry on the BeltLine blog for a taste of the tone and spirit the page intends to create:

“Welcome to the Official Atlanta BeltLine blog! We cover everything from public policy issues, project updates, personal experiences along the Corridor, guest blog posts, event coverage, cool random stuff and more! We hope you will join us on the journey along the Atlanta BeltLine as it continues to grow throughout the City.” 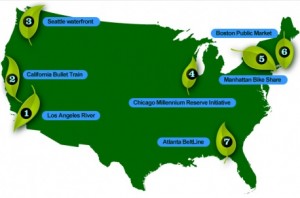 Previous Article
ATL concessions: Common Cause board member responds to Mayor Reed’s letter to Common Cause
Next Article
Martin Luther King III announces his resignation as president of the King Center