Atlanta BeltLine opens Eastside Trail with an eye towards the future

As the sun emerged from the clouds, the northeast section of the Atlanta BeltLine was officially opened Monday morning — a reminder that all good things take time, effort and money.

Nearly all the players — past and present — were there, providing a historical context of what the project means for Atlanta.

“Today, we are not merely opening a new trail or public space,” said Atlanta Mayor Kasim Reed. “We are showing what’s possible for the future of our city.”

And the vision he said is to create a city that is less dependent on cars and one that provides a multitude of transportation options for its citizens.

The 2.25 mile Eastside Trail begins (or ends) at Monroe Drive across from Piedmont Park and continues to Irwin Street — connecting five intown neighborhoods in a new pedestrian-friendly and bicycle-friendly way.

In fact, the mayor took his own inaugural spin of the BeltLine declaring when he dismounted a bicycle that “it felt terrific.”

For people who had been working on the project from its earlier days, recalled all the work that had been involved. 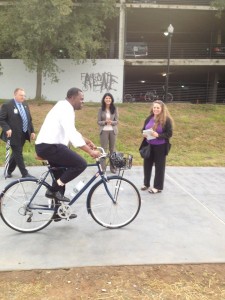 Will Rogers, the national CEO of the Trust for Public Land, said great projects are often hard. It was the Trust that invested about $43 million to secure land around the corridor so that the city would have the option to develop new parks or expand existing ones. The opening of the Trail occurred just south of the new Historic Fourth Ward Park, one of the signature developments that has occurred.

The city has bought about $20 million of the property that Trust acquired. As money comes in, the city could buy more of the secured land, and the remaining property will be sold on the private market.

“We recognized that people needed to move in early,” Rogers said of the Trust’s investment. “This is what we do. We get out in front and take risks. That’s why we exist.”

Rogers, who has worked on projects around the country, called the Atlanta BeltLine ‘nationally significant.”

That also was the sentiment of Jim Kennedy, chairman of Cox Enterprises who along with his wife, Sarah, donated $2.5 million to help the PATH Foundation build out the Eastside Trail.

Initially, Kennedy and his wife thought “this could be the best thing to happen in Atlanta.” But Kennedy said he has changed his mind, saying: “This is the single best project of its kind in the United States.”

Kaiser-Permanente also gave a $2.5 million donation for the Trail, and the Robert W. Woodruff Foundation provided an $8 million gift to help develop the Historic Fourth Ward Park. The Blank Foundation provided funding for the initial Trust for Public Land report by landscape architect Alex Garvin which showed how the BeltLine could end up being Atlanta’s own “emerald necklace” with a string of parks along the corridor.

“What’s powerful about the BeltLine is that you can touch it, feel it right now,” Reed said “It helps you go on to the next thing.”

Initially, the Atlanta BeltLine Inc. board last week approved to contracts to design new pedestrian/bicycle connections between the Trail and Historic Fourth Ward Park as well as a connection to the Ponce City Market, a development being done by Jamestown Properties.

But Reed said he knows that the opening of the first large section of the BeltLine will bring added pressure to build out more sections of the corridor. One of the next projects being planned would be to extend the Eastside Trail south from Irwin Street to I-20.

“What I know is that our commitment to this is unwavering and undeniable,” Reed said. “We are working very hard on the transit component that I believe is going to be a public-private partnership. We are in active negotiations.”

Plans call for a streetcar or light rail line to parallel the trail, and that line would connect to the Atlanta Streetcar that will end on Auburn Avenue and then a line is expected to be built either on North Avenue or Tenth Street to connect with MARTA.

As for the people who were missing from Monday’s event — a few notables were Ryan Gravel, who originally came up with the idea when he was a graduate student at Georgia Tech; former Atlanta Mayor Shirley Franklin; and the two former CEOs of Atlanta BeltLine Inc. — Terri Montague and Brian Leary.