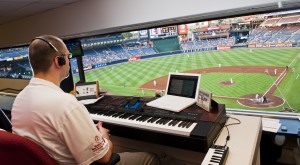 Matthew Kaminski, the Atlanta Braves organist, during a game against the Washington Nationals. (Photo by Pouya Dianat/Atlanta Braves/Getty Images)

While Atlanta Braves and their fans break for the winter, the team’s quirkiest personality — Matthew Kaminski, the twittering organist of Turner Field — stars in another arena.

Kaminski moves from brushback pitches to Broadway when he plays a tribute to Cole Porter on Dec. 28 at Eddie’s Attic.

The Decatur club, known as a launching pad for Sugarland, John Mayer and others, is also a baseball haven.  Namesake Eddie Owen dressed up as an umpire at Kaminski’s gig there right before Opening Day 2011.

That club scene is part of the surreal — and cyber-real — fan base for Kaminski. His 5,286 tweeps (@bravesorganist)  know him as the ivory-tickling zinger of songs that tweak opposing players as they come up to bat. (For Jayson Werth, who had left the Phillies and signed with the Nationals, Kaminski played “Philadelphia Freedom.”).

Reinventing music and meanings for his baseball followers has sharpened his own sense of adventure. He sits in with a polka band, and plays with the salsa Orquesta MaCuba at Loca Luna. 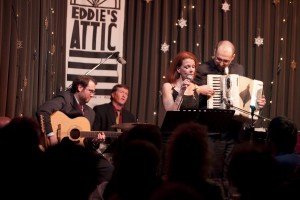 Kaminski shows off his accordion chops to vocalist Gwen Hughes during a performance at Eddie's Attic (Credit: Andrea Taylor)

Yet through all these diverse arenas, Kaminski still keeps his own beat, and his dream: making a living playing a quintessential American music on a single obscure instrument.

The Hammond B-3 jazz organ.

“As soon as I heard it in high school, it immediately stuck with me, and ever since then I have almost been obsessed with it,” he said. “What I had played since I was 5 or 6 was more of Lawrence Welk, cheesy pop style. Today if you come to my house, you’ll see frame LPs on the wall of my music room of jazz organists that I really admire and aspire to play like.”

During the All-Star break in July, Kaminski worked on retrofitting the Yamaha keyboard at Turner Field. With a device called a module and new foot pedals, he created an organ sound more like the Hammond B-3.

“There are only a dozen jazz organists in the world who make a living just by performing,” said Kaminski, who scored an endorsement from the Hammond company as a result of his Braves performances. “It would be cool to do that one day…. That’s something on my horizon.” 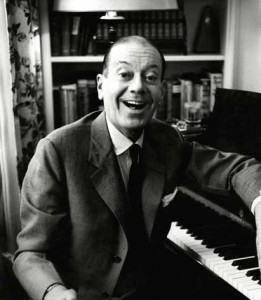 Porter was a fitting choice for Kaminski’s off season appearance at Eddie’s. Porter, like Kaminski, pushed music in unexpected directions as a singular force – like baseball’s designated hitter.

“As you listen to Cole Porter, and perhaps compare him to the other great Tin Pan Alley songwriters who were his contemporaries, remember that most of those songwriters worked in teams — Rodgers and Hammerstein, George and Ira Gershwin, and Lerner and Loewe, to name a few,” wrote NPR music critic Nick Morris. “But Cole Porter did it all — words and music. And nobody did it better.”

Kaminski added: “Gershwin and Mercer and others were writing songs that were 32 measures long. Porter was writing and not adhering to any form. ‘Begin the Beguine’ is like 90 measures long. It’s a lot more difficult to memorize, but I really like it because there’s a whole story being told within the song.”

The story in the song, the song – narrative in a Braves game, the Twitter audience within the baseball crowd – Kaminski’s background may be in the Polish community of Chicago, but his creative journey is more like Russian nesting dolls.

“The challenge to balance the art of being a creative mastermind with the art of being a self-employed businessman, managing his self-promotion for gigs and teaching, has been a huge learning opportunity,” observed his wife, Kathleen Herrelko Kaminski. 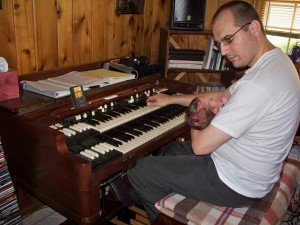 Kaminski with newborn daughter Allison in 2010, in the family's music room in their Tucker home (Credit: Kathleen H. Kaminski)

So which is his main ego? This holiday week, and every week, Kaminski thinks of himself mainly as dad to 19-month-old Allison Margaret Kaminski. When he plays “Jingle Bells” all the way, he’s trying to get her to say, “Hey!” He’s teaching her the timing, delivery and passion that define him.

Within all the musical personae is a guy who lives to play music, on the jazz organ or pretty much anything with black and white keys.

“It may not be for 50,000 people, but a full house at Eddie’s – 150 people – is just as gratifying,” Kaminski said. “I believe that even playing music with my daughter in the mornings, or even playing with her toys, is just as rewarding.”

And Cole Porter fans, beware. Kaminski will slip in “Take Me out to the Ballgame,” like an inside fastball, an inside joke within the Eddie’s Attic show, within The Show (as fans call the major leagues). Baseball and music, after all, can turn on the slightest nuance, no matter what the season or one-of-a-kind performer.

Previous Article
Rosalind Brewer: an up-and-coming woman executive who is leading the way for others
Next Article
Woodruff Arts Center’s Joe Bankoff to retire in May, 2012