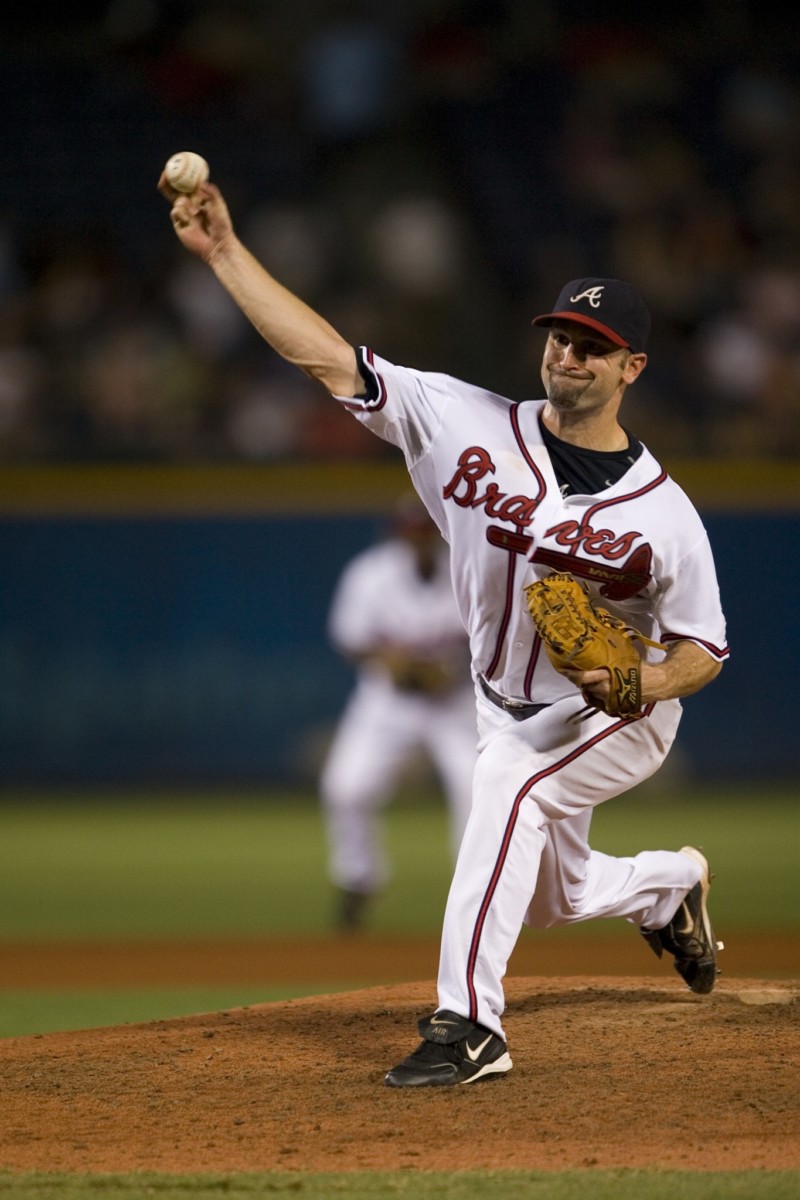 For major league baseball wives like Jessica Carlyle, whose husband Buddy pitches for the Atlanta Braves, this season of spring training means the start of uncertainty. He could get injured, traded or benched. His career could be over in a flash. 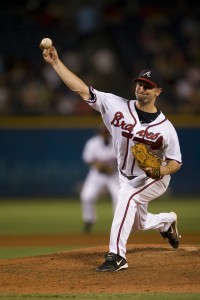 After 17 years in pro baseball, the Carlyles are used to rapid shifts in the foundation of their family’s life. That’s why their family supporters are so precious to them, and that’s why when the earthquake shook Japan on March 11, 2011, the Carlyles pitched in to care for the single mom who had cared for them, and for her community that suddenly, desperately needed help.

Rewind to baseball season, 2010. Coming off a diagnosis of Type 1 diabetes, Buddy Carlyle discovered – to his dismay – that no major league team wanted to sign him. His best opportunity lay 6800 miles east – a guaranteed contract in Japan.

More change rocked him. The Nippon Ham Fighters, based in Sapporo, sent him to the minors. He ended up in a suburb of Tokyo, with a team called the Kamagaya Fighters.

The Carlyles – Jessica and children Carter, then 7, and Kennedy, 5 – moved into a tiny apartment in the Tsudanuma neighborhood of Tokyo. They were obvious outsiders in a dense urban grid.

“It was a nightmare,” recalled Jessica Carlyle. “Buddy and I would wander all over looking for a place for the kids to play outdoors. Finally we found a tiny park that was no more than a green patch with a swing. And Akane was there with her kids too.” 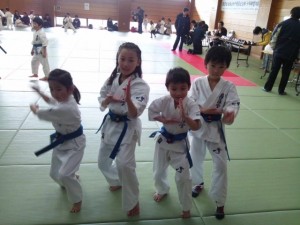 Hohono (second from left) and Kyo (right) Nakagawa made friends with a professional baseball family from Georgia — the Carlyles.

Akane Nakagawa was recovering from a personal crisis: leaving an abusive husband, to work two jobs and raise two children by herself. She was eager to make friends, find playmates for her children – daughter Hohono, then 9, and son Kyonosuke, 6 — and improve her English.

“Our conversations got really deep,” Jessica Carlyle said. “I understood her and respected her and told her it was OK, and that she deserved the best life. She was lonely and wondered how she was going to go on.”

These moms, both aged 35 then, began meeting almost daily at the tiny park. They became anchors for one another. 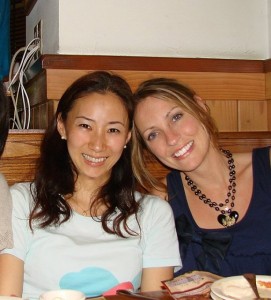 “Our apartment in Japan was the size of our living room in Georgia,” Jessica Carlyle recalled. “It was dark and rainy a lot. There were few bright spots in our day except Akane. She represented someone who had saved us.”

After Buddy’s contract was up, the Carlyles returned to Georgia. He signed with the New York Yankees, and Jessica and her friend stayed in touch with emails, holiday presents and constant photos of their growing kids.

Buddy was in spring training in Florida a year ago when his wife picked up his call on March 11.

Kyo Nakagawa slept in his mother’s car. Daytime, he wore his bicycle helmet in case of aftershocks.

“We had biiiiig earthquake!!! We are OK ! But our house’s water stop. Store has no food, snack. We will stay my car. Car is safe  maybe…love akane.”

More details emerged, of aftershocks and radiation, from what was measured and named  the 9.0-magnitude Tohoku quake. Its epicenter was 250 miles from Tokyo. The park where the Carlyles had met Nakagawa would become a staging area for portable toilets.

Horrified, the Carlyles mobilized a network of friends throughout the 13 cities and three countries where he had pitched.

First, his interpreter in Japan helped them reach Akane and arrange for her family to get to the airport. The Carlyles purchased $7,000 in airfare. Two weeks after the earthquake, Nakagawa and her children flew to Georgia for a month.

“Her kids had been wearing bicycle helmets in case of aftershocks, and they hadn’t been able to be outdoors because of radiation,” Jessica Carlyle said. “They were so excited to see blue skies.” 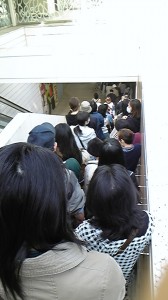 Akana Nakagawa was in this line to pick up fresh eggs, in the wake of the March 2011 earthquake in Japan.

Immediately, checks, supplies and offers of help rolled in from the Carlyles’ network of supporters.

Nakagawa listed everyone she knew who needed help, because they had been left with nothing after the quake. The Carlyles’ friends pitched in to send care packages to these people, who lived in shelters called asylums.

There, the care packages became known as “dream boxes.”

In October, Nakagawa sent this update:

“STORE: normal…but electricity saving … light is off… escalator is not moving.

FOOD…….. some rice, vegetable,beef…  include Radiation,

Government have to test every day!! 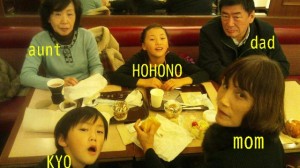 On Jan. 1, the Nakagawa family in Japan took this photo moments after another earthquake.

On Jan.1, Nakagawa apologized for the serious faces in a family photo she was sending to ring in the new year. Just before she took the picture, “Japan had big aftershock!! Its [magnitude] 7.0 !! Long time no big aftershock. We surprised today!!”

On Valentine’s Day, she wrote about her botched brownie making with her kids, who were unexpectedly let out of school.

“Owing to epidemic of influenza (It’s new record!) many classes closed, a lot of children were sent home because, [vaccine] was short  after 3.11(big earthquake)…but my kids did vaccination. So good!”

The earthquake’s ultimate impact on the Carlyles and Nakagawas was to close the distance between them. The disaster cleared away the superfluous trappings of life in the major-league world, to reveal the common ground that all families stand on. 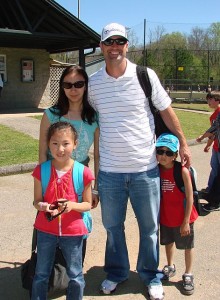 “Life is far too short to ignore others’ hurts and needs,” Jessica Carlyle said.

“Do the seemingly impossible or difficult thing, especially if it means extending God’s compassion and love to others.We know that Akane and her children not only know people in Georgia love them, but because of our time together, they know that there is God above who is looking after them.”

Buddy Carlyle, meanwhile, is heading into his career twilight. He has signed a minor-league contract with the Braves. He’s not sure yet which team he’ll play for, what city he’ll live in. Somewhere, he’ll step on pitcher’s mound, dig his cleats in the dirt and pitch as solidly as he can. He has examples beyond baseball for inspiration.