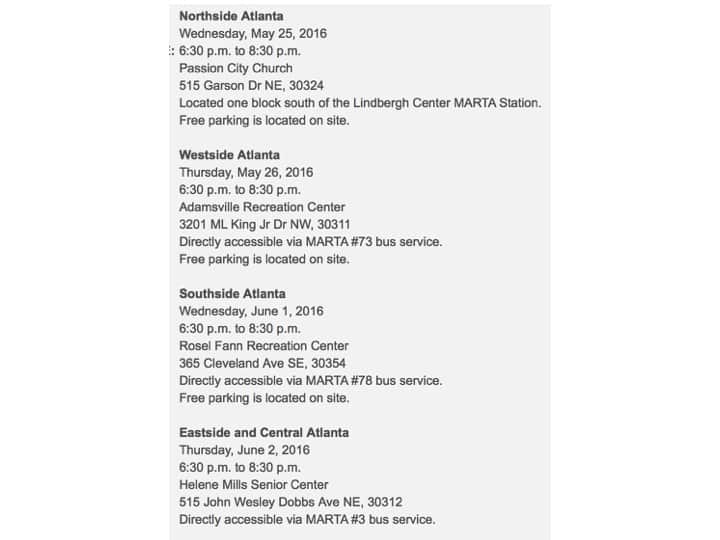 Atlanta Mayor Kasim Reed’s administration on Thursday called four public meetings to gather input about the two proposed transportation sales tax referendums that Reed wants on the Nov. 8 ballot. By state law, MARTA must present a preliminary list to the city by May 31 for a proposed transit tax increase to appear on a ballot this year.

State law provides a second deadline for a project list. This one calls for MARTA TO deliver the final project list to the city by July 31.

In addition, by state law, the Atlanta City Council has to vote by June 30 to call a referendum for it to appear on the ballot this year.

The council has authority under the law to delay the vote a year, and call a referendum in November 2017.

The council has just two regularly scheduled meetings between now and June 30 – on June 6 and June 20. The council can call a special meeting. 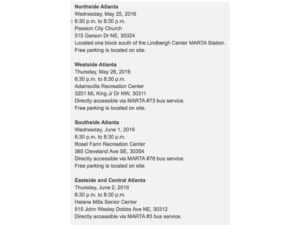 This is the schedule of meetings to discuss Atlanta’s proposal to increase the city’s MARTA sales tax rate and to impose a new sales tax to fund non-transit related transportation projects. Credit: City of Atlanta

The mayor’s office announced the meetings in a media advisory. A press release was not provided; releases typically provide more robust information than advisories.

The purpose of the meetings it to, “gather input for a proposed project list that will be used to guide transit and transportation investments,” according to the advisory.

The list of participants includes representatives from the administration, MARTA, Atlanta BeltLine, and city council members.

SB 369 authorizes Atlanta to call a referendum to raise the existing 1 percent MARTA sales tax by up to 0.5 percent. If the full 0.5 percent is not called, the amount can be reduced in increments of 0.05 percent.

The bill also authorizes Atlanta to call a referendum for a proposal to raise the sales tax by an additional 0.5 percent for transportation improvements that are not transit related.