Sometimes the political theater at Atlanta City Hall is pure spectacle. Thursday was one of those days. 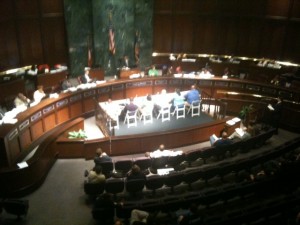 The first-ever team of lobbyists for Atlanta’s police, firefighters and 911 operators present their request for a pay hike for public safety workers to the Atlanta City Council. Credit: David Pendered

A union leader won applause for her speech, including from councilmembers Michael Julian Bond and C.T. Martin. Bond, who chaired the meeting, quickly regained order and seemed to smile as he said such outbursts were not in order.

The wife of a policeman also was applauded after her brief comments about low pay for cops and helping to buy a billboard to highlight the police pay issue. She wrote a blog in December titled, “City council is a joke,” in which she discussed the size and dialect of a councilmember.

Nothing was resolved. It really was just theater.

But it is important theater. This drama has played out for at least 20 years, since Maynard Jackson’s final year in office. Thursday, though, marked a shift in the script.

For one, the spotlight was literally on a handful of labor leaders. They sat on a dais to represent the police, firefighters, and 911 call responders. Someone on the council if anyone represented the corrections officers, and the rep for the 911 workers said she’d represent their concerns because they’re all city employees.

This is the type of dangerous work that Atlanta firefighters cite in their calls for a significant pay raise. Here, a firefigher uses a chainsaw to cut a vent hole in the roof of a structure fire this week along Donald Lee Hollowell Parkway. Credit: AFR Report

In past years, the reps have come forward individually. Some state that they are risking their job status to come forward to say that public safety is at risk because veterans are quitting over low pay and heading to greener pastures. Some councilmembers recall their own day in the movement and promise to do what they can to wring concessions out of the mayor and administration to aid public safety workers – though it may mean pinching other workers.

The tone shifted seismically this year.

It may have been when Gina Pagnotta-Murphy, the president PACE/NAGE Local 500, made a presentation that ended with an elegantly simple statement.

“It’s time for us to get a raise,” Pagnotta said. “Five percent is what I’m fighting for … I’m not even coming to the table for 1 percent … Stop pitting police and fire and general employees against one another – it needs to stop.” 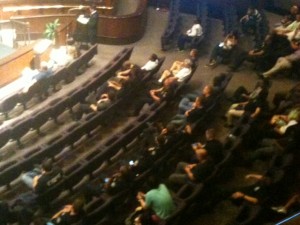 That’s when the room, half-filled with first responders, filled with a rousing applause. Bond joined in, and Martin said later that he had, too.

Bond said something to the effect of: “Even though I participated, there will be no outbursts.”

Soon after, Kelly Uhlis, the wife of an Atlanta police sergeant, took the podium to call for higher police pay. She said she contributed to a fund that purchased a billboard that compares the city council’s pending pay hike of about 50 percent to that of city employees.

“I want you to recognize these people are voiceless when it comes to listening to you guys,” Uhlis said. “You have a sounding piece and they don’t.”

In addition to the billboard, Uhlis has posted her thoughts on the issue of police pay and council pay on a personal website. She relates her impressions of a councilmember speaking last summer about the issue of pay raise for council members. She mentions his size and suggests he needs a “Rosetta Stone intro to English” before observing: 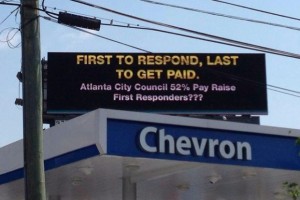 This billboard that calls for pay hikes for public safety employees has been raised over Atlanta. Credit: AFR Report

“It’s really not funny when you really break down the numbers and see police officers and their families on government assistance because the city council and the mayor would rather discuss more important business like, The Busted Ass Belt line. And how one day it will be like the BIG APPLE!”

Councilmember Joyce Sheperd spoke after the applause for Uhlis had faded. She mentioned her career in the telecom industry and 31 years in the Communications Workers of America. Sheperd echoed Pagnotta-Murphy’s comments.

“We didn’t bargain for one group over another,” Sheperd said of her days with the CWA. “The media pits us against you … It’s mindblowing to me that that’s how you all bargain, or the city, or how we all bargain. It’s sad. All of you should be one union, one group. You should be sitting down together … and that could stop the circus that happens every year.”