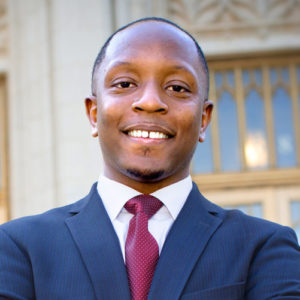 Courtney English was first elected to the board of Atlanta Public Schools in 2009. In 2014, he was elected its chair. Now he’s running for Atlanta City Council’s as a citywide candidate for Post 1.

Q: What’s your No. 1 concern for the city, the whole city is the district?

A: No. 1 is what I would generally think about as equity, meaning that all of our citizens, all of our neighbors have the opportunity to have the ability to share in the bounless opportunities that Atlanta has to offer.

I think a lot of the other issues that we face in this city, whether it be crime or persistent poverty all boil down to how well we’re educating our youth. …

… I think additionally from an equity standpoint, we’ve got to make and keep Atlanta affordable. As more and more people move to this city, we can’t … do development or have growth at the expense of long-term residents. So we’ve got to find a way to prevent displacement in this city and I think we do that by deploying affordable housing bonds, I think we do that by making it easier for people to retrofit and renovate their homes by providing either tax incentives or government grants to do so, particularly for our senior citizens. I think we do that by looking at policies like incusionary zoning. I think we do that by expanding the city’s anti-displacement program which is right now in the English Avenue and Vine City neighborhoods. There are a number of about 12 different tools at the city’s disposal that I think can be deployed to make sure we keep long-term residents in place and take advantage of the growth of the city.

Q: You’re a member of the Atlanta Public Schools Board. What’s an accomplishment you’re proud of as an elected official?

I’m incredibly proud of the work we’ve done on the Atlanta Board of Education. When I joined the board our graduation rate hovered right at 50 percent. Today it’s at 71 percent and climbing. We’ve doubled the number of kids who are graduating with special needs, we’ve reduced the size of central office literally to the tune of about $28 million and redirected those funds into the hands of our teachers, our principals and our parents, the folks who are closest to our kids. We’ve launched a massive turnaround strategy targeted at improving student performance at our lowest-performing schools. Two-thirds of all of our schools showed improvement last year. We’ve partnered with Achieve Atlanta which is a $20 million effort to remove financial barriers for students to go to college. We’ve launched a $30 million partnership with Atlanta Technical College to renew our focus on vocational training and make sure our kids are ready for careers. We secured another penny sales tax for school construction, it’s going to yield about  $542 million to renovate, replace, upgrade our schools and our technology infrastructure. One of the things I’m most proud of is that we’re going to be bringing … what was the Howard High School back online. It will be serving as a middle school. …

… I don’t know if there’s a single thing I think. When I joined the board, APS was embroiled in the largest cheating scandal in American history. I’m proud to say I’ve been on the team that helped turn it around and lead our school district and our city out of what really was a dark time.

A: Atlanta’s uncomfortable truth is that while we are home to the world’s busiest airport, the third highest concentration of Fortune 500 companies, we are at the same time near the top of the list in terms of child poverty, dead last in terms of economic mobility and so that kind of inequity is simply not sustainable. It’s not good for people, certainly and it’s not good policy. You can’t have a city that has that kind of inequity and expect your economy to continue to thrive.

Q: What’s something this City Council has gotten right in the last four to eight years?

A: I’m glad that the Council as a whole has been serious about protecting the financial interests of the city, in terms of growing our reserves, putting in policies that have helped to raise the city’s credit rating.

Q: What’s something this City Council has either gotten wrong or failed to do?

I’ll say that I’m a proven leader … I bring a track record of success to the job, I’ve been able to get big things done in the sevice of one our most vulnerable populations, one of our most important, our children. I think that my vision for Atlanta is to be the city of choice for all those who seek to build big dreams, whether you were born here like me or chose to move, I want to make sure Atlanta works for you. I’ve got a track record of strong, effective and innovative leadership. These aren’t things that I’m just talking about, these are things I’ve actually been able to get done during my time of public service. So you’ll be buying a proven commodity with the ability to actually move the ball on issues that are important to our communities and our neighborhoods. …

… The last thing is, in light of what may or may not happen with the city’s corruption issues,  I also have a track record of stepping into governmental agencies who have been in that kind of situation before and leading them out of it. I would dare say that I’m one of, if not the only elected official who has that … kind of experience … The cheating scandal happened, two months after me being sworn in is when the cheating scandal broke. We were being investigated by the GBI and a whole bunch of other folks. I bring that level of experience to the job of not only cleaning up the school system, not only putting policies in place to make sure things like that never happen again, but I have a track record of then building and creating success and delivering results for children on top of this.