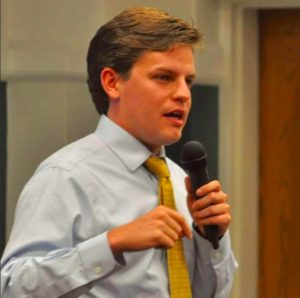 Matt Westmoreland was elected to the Atlanta Board of Education in 2013. Before that, the Midtown resident taught at Carver High School.

A: Equity and economic mobility. …I was born and raised in Atlanta, graduated from Atlanta Public Schools, came back after college and taught at Carver and ran for the school board to try and help get the system back on track after the cheating scandal, a lot of dysfunction back in the day. I am running for Council because I want to help build a more equitable and inclusive and diverse Atlanta. I think that is done by being really thoughtful about economic development and making sure that we are providing incentives and being thoughtful about encouraging economic development on the side of the city that literally hasn’t seen it for a long, long time.

Q: What could you as a Atlanta City Council member do about that?

A: So a lot of different things. I think that improving economic opportunity and mobility means having a strong partnership with the school system. I think it means being an advocate for early childhood education. Bringing, convening people to have a conversation about early childhood education, improving the city’s workforce development department.

I think it means making sure that we’re doing more around affordable housing in the next four years, whether it’s partnering with AHA [the Atlanta Housing Authority] to help redevelop the 11 sites that they currently have that are not in use, whether it’s thinking about community land trusts and land banks, whether it’s talking to developers about how to include more affordable housing units in the projects that are going on. We have a lot of vacant buildings. Atlanta Public Schools actually started a task force last December to looking at using some of our surplus properties for, originally it was for affordable housing but I think it grew to some neighborhoods may not need more housing there’s a lot of housing. Getting tougher on blight and on vacant and abandoned homes. … Using the newfound authority we have from the state to take control of those properties that are both eyesores and public safety issues and rehab them so that we have more affordable housing stock. Which means that more people can stay in our communities or move to our communities.

Partnering with MARTA. Between the Renew Atlanta bonds and the TSPLOST [transportation sales tax] by the city, and MARTA half-penny, we’ve got a tremendous amount of resources that are going to be flowing into the transportation/transit infrastructure world over the next five, 10, 15 years. Taking a look at expansion of transit in both time but also in place so that people who live in certain parts of town have access to transit that gets them to a job that pays them a living wage, that then leads to that economic mobility we were talking about in the beginning.

Q: Tell people a little something about yourself in this way: What’s an accomplishment you’re proud of? It could be something professional, personal or school board-related.

A: I think from a professional, public office perspective I am most proud of the work I’ve done as chair of the Budget Commission for the school system over … three years. … I did it from when I got elected until last fall. Between cutting waste at central office, raising teacher pay, allocating dollars based on student needs … and then pushing a greater percentage of the budget into the school house and into classrooms and doing all of those things without raising the millage rate. So we were able to fund a lot of strategic priorities, whether it was the turnaround strategy or pay parity for our employees or our new police department.

Everything we do takes money and I worked really hard with the superintendent and with my colleagues to build strong budgets and each budget is stronger than the one before it. I think we’ve done that.

Q: Over the next four to eight years, what’s an uncomfortable truth that the next Council needs to face?

A: That Atlanta has a wider income gap than any other major U.S. city and that it is harder for a child born into poverty in the city of Atlanta to get out of poverty than any other city in this country.

Q: Over the past four to eight years, what’s something that this Council has gotten right?

A: I think this Council and the mayor … this governing team, has put the city in a very strong financial position. Eight years ago we were coming out of the Great Recession, we had an unsustainable pension plan, pension model. I think if you look at where we are now, between credit ratings, reserves, the investments, the sewer renewal, and then all of the different transportation needs, the four-tenths of a penny … they have put us in a very strong financial position to be able to go do more good work in the future, now that we’ve kind of taken care of that.

Q: Over the past four to eight years, what’s something that this Council has either gotten wrong or failed to do?

A: I was born and raised in Atlanta, I’m a proud graduate of and former teacher in our public school system. I have worked really hard over the last four years to help turn around our school system and I think you can see successes there in a graduation rate that’s improved from 51 percent to 72 percent and climbing. And I want to work over the next four years to use that experience to help build a more equitable, inclusive and diverse city for everyone who calls it home.