The Atlanta Community Food Bank has received a $100,000 grant to help it serve more than 400,000 residents in Atlanta and North Georgia.

Humana Inc. and its Humana Foundation provided the $100,000 grant as part of its fifth annual Atlanta Benefits program. Humana is a leading provider of health benefits in Atlanta. 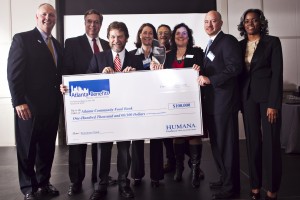 The Humana grant will provide the seed money for the Food Co-op, which will provide items such as shelf-stable milk, peanut butter, canned and frozen meats and other high-protein foods to Georgia’s served by the Atlanta Community Food Bank and its 800 partner agencies.

In a statement, Dan Feruck, president of Humana’s Georgia commercial operations market, said he was honored and proud to be able to help the Food Bank “put healthier meals on the plates of so many Georgians.”

The Food Bank was one of three finalists in the running for Humana’s $100,000 gift. The other two non-profits were: the Lionheart School, which provides a developmentally appropriate program for children with autism and other disorders; and the Marcus Jewish Community Center of Atlanta, a meeting place that offers educational, cultural, social and recreational activities. Both of those organizations received a $10,000 grant at a celebratory gala Thursday at Piedmont Park.

The Humana grant to the Food Bank comes at a critical time, given the down economy. In the past year, the number of people seeking food to feed their families has increased by about 10 percent.

Humana, based in Louisville, Ky., is one of the nation’s largest publicly-traded health benefits companies serving 10.3 million members.