A renewed push is underway in Atlanta to harvest rainwater and improve the management of storm water in an era of sustained drought.

Advocates say a regional rainwater harvesting program could produce more than 20 million gallons of water a day. That represents about 16 percent of metro Atlanta’s net consumptive use of about 125 million gallons a day, according to the latest figures maintained by the Atlanta Regional Commission.

Two efforts are ramping up to improve the management of the region’s water resources: The drafting of potential new storm water regulations in Atlanta that would apply to all new homes, and to certain additions to existing homes and commercial properties; And, a renewed push throughout the region to encourage property owners to harvest rainwater.

The issue is pressing as all of metro Atlanta now is in a drought, according to the National Drought Mitigation Center. Levels of drought range from moderate in north Cherokee County to exceptional in south Fulton County.

Walter Reeves, the affable Georgia gardener, predicts drought conditions aren’t likely to lessen. Reeve’s website has a segment that says Georgia’s had five “droughts of the century” since 1924, and provides a link to a research paper on recent droughts.

The purpose of the revision that’s proposed to the city’s current post-development storm water ordinance sounds simple enough: “To emphasize natural resource protection and better site design principles including the use of green infrastructure and runoff reduction.”

The way Joy Hinkle, of Southface, describes the proposal, the goal is to keep more storm water on a developed site so there’s less runoff to manage offsite. That means the goal is less about building water features, such as the one at the Old Fourth Ward Park, located near City Hall East, and more about using plants and soil to manage rainwater where it falls.

This approach is in keeping with emerging federal standards on storm water management. 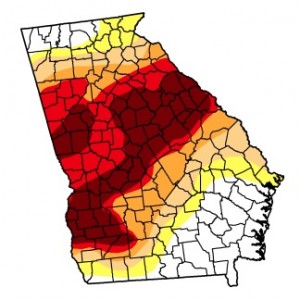 The darker the color, the more severe the drought as portrayed on this drought monitor. Credit: National Drought Mitigation Center

The working draft of the proposal has not been filed with the Atlanta City Council.

As its currently envisioned, there would be no change in enforcement or penalties for violations.

Highlights of the working draft include:

Last week at Atlanta City Hall, about 75 business and community leaders gathered to brainstorm on ways to promote the harvesting of rainwater by residential and commercial property owners.

The new push is coordinated by the Southeast Rainwater Harvesting Systems Association, a non-profit organization that promotes rainwater harvesting and the reuse of water. The organization is ramping up a public awareness campaign that focuses on this process that could be adopted even as the state continues in the direction of creating more water reservoirs.

After a roundtable conversation at the end of the event, each group presented ideas on how to promote rainwater harvesting. Some of the ideas include:

One example of a government rebate program exists in Tucson. The city government there has implemented a cash award of $300 for homeowners who install a rainwater harvesting system.

Click here to read more about the Tucson program.