Atlanta could clear $10 million from sale of Underground Atlanta

Atlanta could clear about $10 million from the sale of Underground Atlanta if the deal goes through as expected. 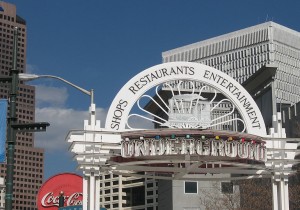 Atlanta could reap about $10 million from the sale of Underground Atlanta, according to financial reports.

Atlanta owes about $15.5 million on the loan it took out to develop Underground Atlanta, according to EMMA, an official repository of information on city securities. The sale price has been estimated at $25.75 million.

In addition to eliminating the annual debt payment, the sale of Underground would cut out about $3 million of additional expenses the city pays annually, according to the city’s budget for the current Fiscal Year 2015.

Atlanta Mayor Kasim Reed is expected to announce terms of the deal at a briefing today at 10:30 a.m. at Atlanta City Hall.

Along with the purchase price, the buyer is expected to pump an additional $75 million to $225 million into Underground, to build homes and commercial space.

The interest rate has crept up, to 5 percent since 2012. The interest rate was 4 percent for the first two payments, according to a report on EMMA, which stands for electronic municipal market access. EMMA is maintained by the Municipal Securities Rule Making Board, which is subject to oversight by the Securities and Exchange Commission.

Atlanta has been whittling down the loan it took out to develop Underground Atlanta since 1989, when the refurbished Underground opened as a festival destination.

In 2009, the city refinanced the loan at lower interest rate than its previous rate and for a short term – just seven years. The sale occurred in May, during the term of then Mayor Shirley Franklin and seven months before Kasim Reed was elected mayor.

Moody’s rated the bonds as mid-level investment grade, A1, and gave them a negative outlook. Moody’s determined that Atlanta was challenged to pay its bills because the city was borrowing from savings to cover operating expenses and wasn’t collecting enough revenues to cover public safety and pension costs.

The city’s objective in selling Underground Atlanta is to free funds so they can be redirected to maintain and improve city streets, bridges, sidewalks and other infrastructure.

The sale of Underground Atlanta is one of the “quick fixes” recommended in June by Mayor Kasim Reed’s Blue Ribbon Committee on Waste & Efficiency in Government. The committee was co-chaired by Atlanta Councilmember Howard Shook and Delta CEO Richard Anderson.