A picture of the Opportunity International School with David Allman on the right in a pink shirt. (Photo by Joe Handy.)

When Atlanta real estate developer David Allman turned 50, he pulled back from the day-to-day of his business to explore ways he could improve the lives of the world’s most impoverished.

In late March, Allman took a group of Atlanta leaders to Nicaragua; the place where he and his wife, Donna, have spent the past 16 years creating an ecosystem to help a community out of poverty through education and entrepreneurship. 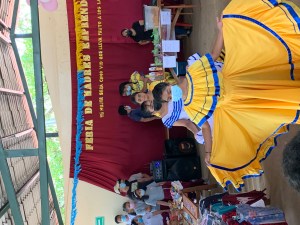 When the Atlanta group visited the school, there happened to be a celebration for women featuring artists and entrepreneurs. (Photo by Bob Hope.)

Over the years, the Allmans have traveled to Nicaragua more than 40 times, spent countless hours and invested nearly $5 million of their own wealth to help change the lives of thousands in a rural part of the country, about one hour away from the capital city of Managua.

The Allmans, working with Opportunity International Nicaragua and the community, have built a high school specializing in agriculture and hospitality, developed the Pacaya Lodge Resort (where hospitality students can get hands-on training), worked with the local farmers to improve their productivity growing the yucca crop, constructed a yucca processing plant making gluten-free flour that’s being marketed and sold to U.S. companies through the for-profit venture, Prospera Foods.

Last year, Prospera Foods earned a $1 million profit — and now the question is how to best invest those proceeds to continue improving the lives of some of the poorest people in Nicaragua.

“We have flourished in an economy that’s not doing well,” Allman said in an interview after returning from his most recent trip. “It is the second poorest country in the Western hemisphere [after Haiti].”

For Allman, the investment in Nicaragua has been an opportunity to practice how the private sector can work with nonprofits to create lasting social change in communities with the greatest needs. Robert Lupton, an Atlanta-based community developer, has been with Allman from the beginning of his Nicaraguan venture. 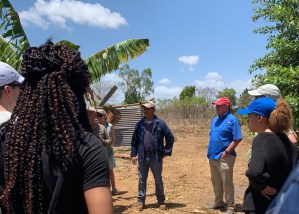 The Atlanta group was able to meet with farmers in the area. (Photo by Bob Hope.)

“We go deep,” Allman said about the ecosystem they have created in Nicaragua. “We are not looking for people to just survive. We are looking to help people become middle class.”

The adventure has been full of ups and downs. It took three years to get a building permit for the hotel. Unfortunately, the tourism industry has been impacted by COVID, the political climate and fewer airline carriers serving the country. Allman, an executive who is used to making decisions and getting stuff built, had to learn to hold back, analyze the environment and let the community help pave the way for the various initiatives.

After doing an “asset inventory” in 2008, Allman’s team picked two focus areas — sustainable agriculture and sustainable tourism — because they were both growth industries that could improve the lives of the working poor.

“We wanted to be a facilitator to ground-based empowerment,” Allman said of social impact investing. “We started small. We could bring resources and expertise. The community sets the priorities. They are empowered. You can’t get out ahead of the people.” 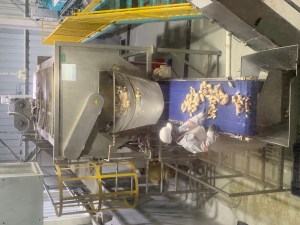 The high school opened in 2010 offering certificates in the fields of agriculture and tourism. About five years later, the hotel opened and so did the initial processing plant.

“It’s not for the faint of heart,” Allman acknowledged. “You need to make a long-term commitment. There are headwinds. And it takes longer than you anticipated, and it costs more. There were a number of dark days. And there were times I didn’t know if it was going to work,”

Upon their return, the group from Atlanta reported that this approach is definitely working.

Clark Dean, executive managing director at Transwestern, said the trip showed him how one can “truly help people and create systemic change” by working in sync with the community.

“This model is one of the best I’ve seen,” Dean said. “They have built this interconnected system that builds upon entrepreneurship and opportunity. That was the spark I was left with.”

Dean said it was clear to him that the community has embraced the school, and the farmers are increasing production through innovative agricultural practices. The $1 million in profit from the yucca processing plant have led to a “healthy tension between the for-profit and the nonprofit” sides of the enterprise. 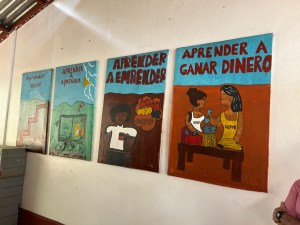 Signs at the school encourage students to aspire to go into business. (Special.)

“It’s a passion project for David and Donna,” Dean observed. “Here is this phenomenal developer being able to take his skill to a community. He deeply cares about the people. I’m so impressed by the local leadership. The way they’ve done this has empowered people. Local people are really making a difference. They’re bringing the communities along.”

Dean said that although Allman is the architect of the venture, it was touching to see the developer be just a team member in Nicaragua. “He’s done this in a very authentic, selfless way,” Dean said.

“This trip was structured to allow direct access to farmers and their children and to see and hear from them in field, home and school,” Sheffield Hale, president and CEO of the Atlanta History Center, wrote in. an email. “The parents’ aspiration and sacrifice for their children when given the opportunity is what stuck with me.  There are many obstacles to the future of a democratic and thriving Nicaragua- but given my limited view and all I can gather- those obstacles are not inherent in the land or its people.”

Joe Handy, president and CEO of the National Black MBA Association, traveled on the trip with his daughter, Jaelyn, who currently is a college student. 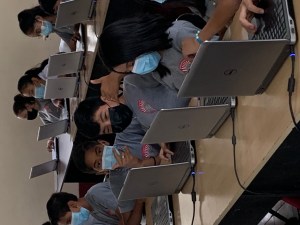 Students in class at the high school in Nicaragua. (Photo by Bob Hope.)

“What David and Donna are doing in Nicaragua is nothing short of God’s work. Although there are many challenges to overcome, everyone I encountered had a positive spirit,” Handy wrote in an email. “I admired the hard work of the farmers and the dedication they have for proving a comfortable life for their families. I reflected on the hard work they do day in and day out and couldn’t help but to feel guilty about the luxuries we have. This was an educational experience for me and my daughter.”

Handy said he was especially impressed with the entrepreneurial spirit he saw on the ground.

“David’s forward-thinking of developing a pipeline of entrepreneurs is trail-blazing, to say the least,” Handy continued. “When we visited the communities, it was refreshing to see how they are coming together to solve their problems. I came back with a true appreciation of the of the farmers, students, workers, and the community in Nicaragua and admired their ability to persevere in spite of the challenges.”

During the interview, Allman said he has no regrets at all.

“Donna and I would say of the things we’ve been involved in, this is where we’ve felt God’s pleasure the most,” Allman said, adding a message to outside nonprofits who may not have the staying power to impact change. “You have got to go long and not parachute in,”

Taking a page from Lupton, Allman explained the merits of his approach. Giving is an uneven transaction. Lending is a voluntary transaction. But investing is more of a partnership. 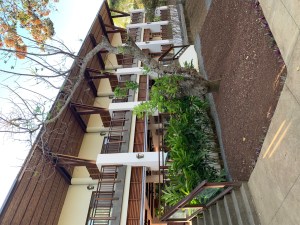 The Pacaya Lodge and Resort. (Photo by Bob Hope.)

“We have about 150 to 160 employees in the plant, the school and the hotel,” said Allman, listing the successes. “We have trained about 1,000 farmers, and we have business relationships with about 400 farmers. We have had 150 farmers certified in organic farming. We have impacted the lives of tens of thousands of people.”

The one venture that has not yet been able to make a profit is the Pacaya Lodge and Resort.

“It was important to have a venue to teach hospitality students,” Allman said. “We are in a tourist-rich area. We’re near the historic city of Granada. The hotel sits on the rim of a volcanic lake. It’s a pristine location. It was an economic development opportunity. We won’t be profitable until there’s a significant return of international travel.”

Despite those challenges, the Allmans have persevered, and they continue to look forward. After six graduating classes, the plan is to add a 12th grade class — one more than required in Nicaragua — to enhance technical skills and improve students’ fluency in English. There’s also discussion of building a second processing plant.

In closing, Allman simply said, “I consider myself to be a socially responsible capitalist.”

Note to readers: I was invited to join the group from Atlanta to tour the work of Opportunity International Nicaragua. Unfortunately, once I got to Miami to fly to Managua, I was told the Nicaraguan government had put me on a “Do not board” list. I was not alone. Martha Brooks, who is involved with an international relief organization, also was on the same list. Lupton, who has been to Nicaragua about 15 times, was not allowed to board the plane because he had not been authorized. I decided not to focus on those issues because I believe the work that David and Donna Allman are doing in Nicaragua needed to take center stage. 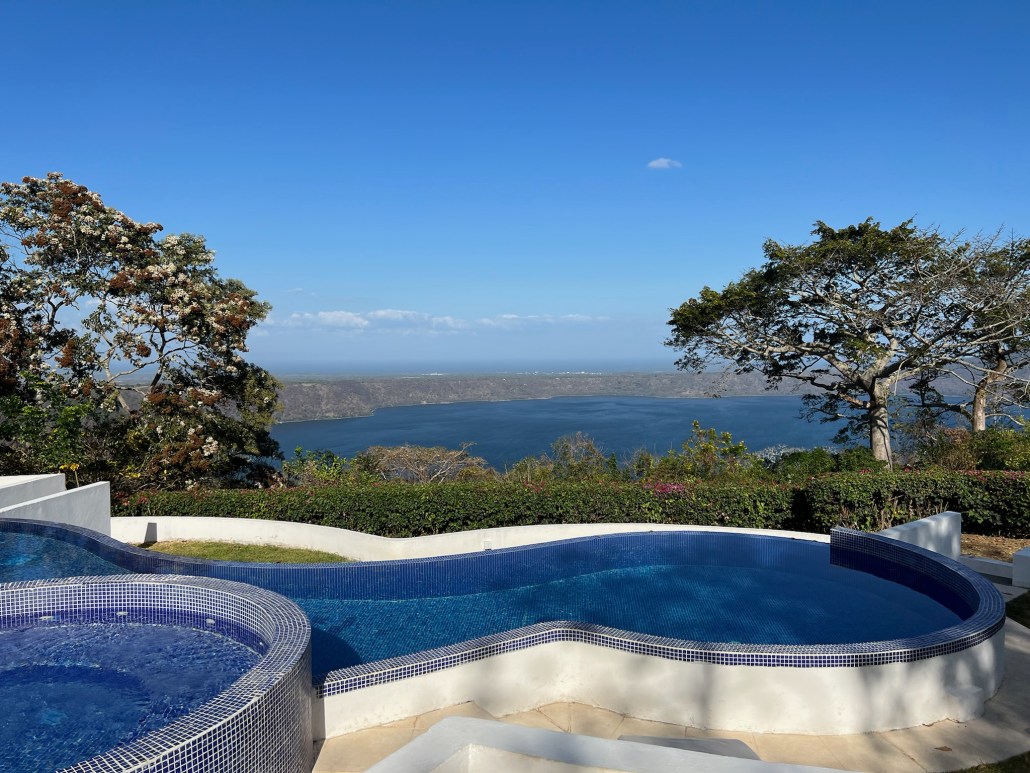 A view of the Pacaya Lodge pool overlooking the volcanic lake. (Photo by Clark Dean.) 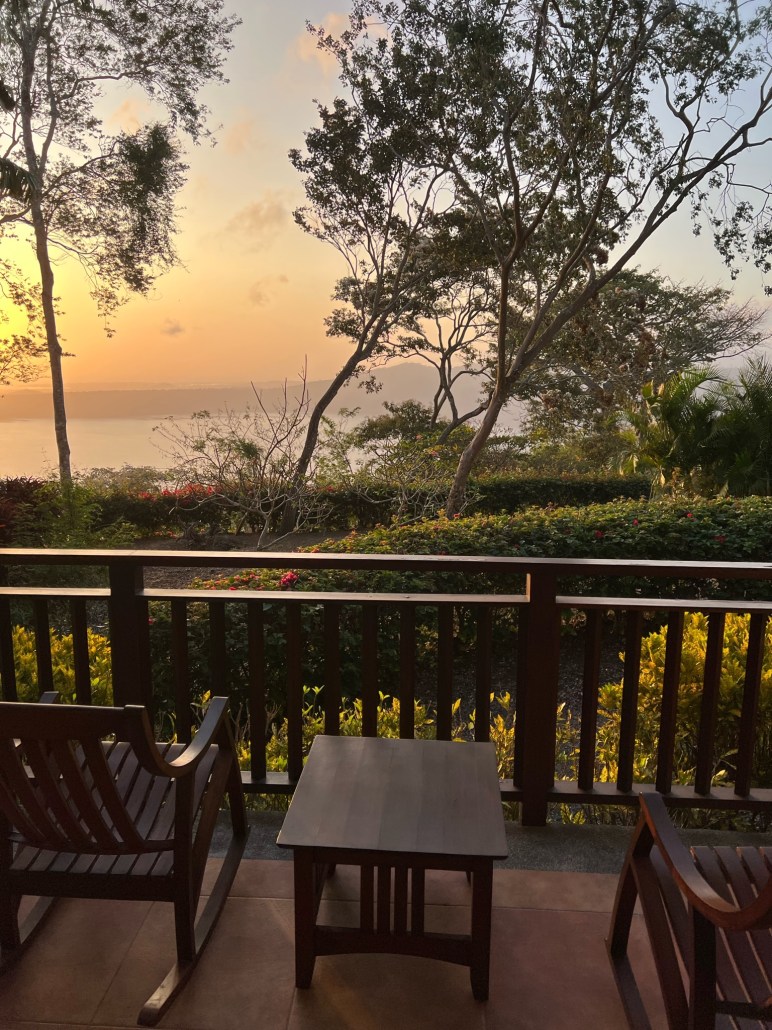 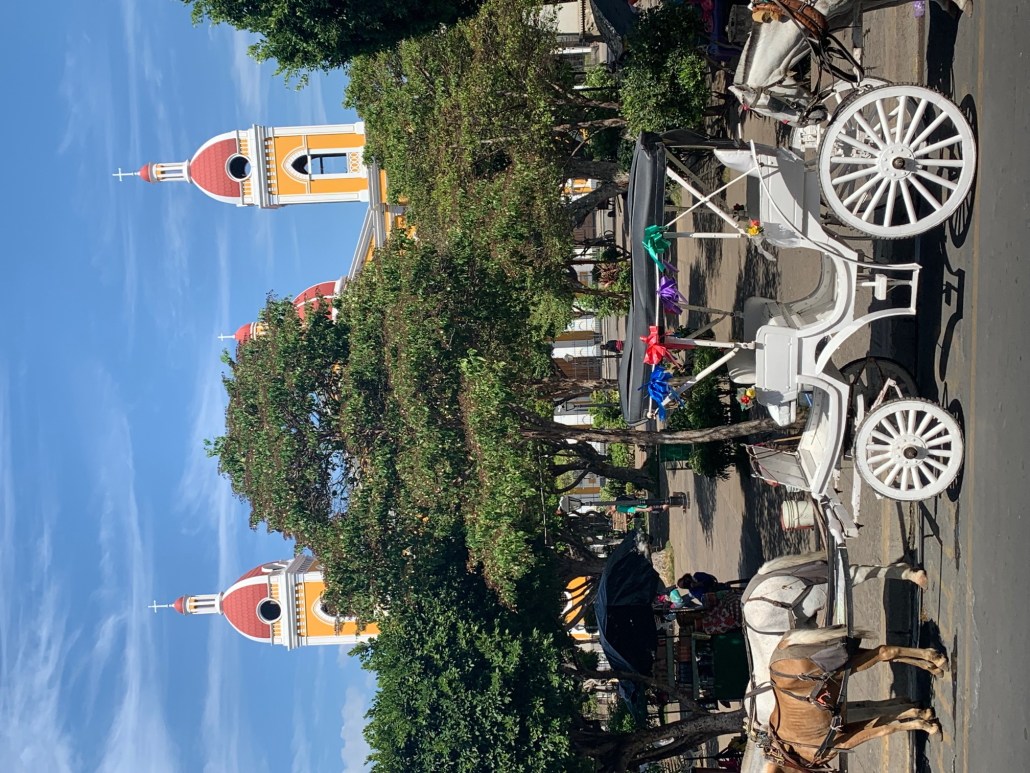 The Pacaya resort is near the historic city of Granada. (Photo by Bob Hope.) 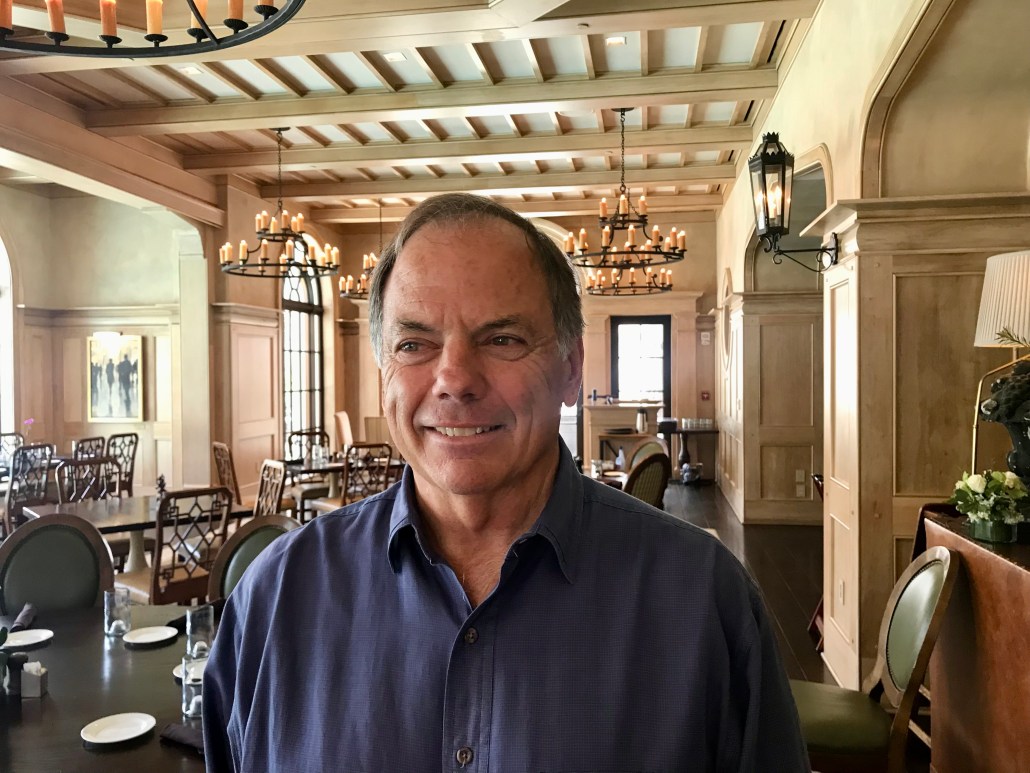 David Allman, back in Atlanta, reflects on his experience as a “socially responsible capitalist.” (Photo by Maria Saporta.)