CARE helps a gentleman get vaccinated against the COVID-19 virus in Bangladesh (Special: CARE)

To facilitate smooth and accurate registration of COVID vaccine recipients, 26 people from different zones of Gazipur City Corporation were given an ICT training on ‘Shurukkha Apps’ on 15th February, 2021.

In the beginning of the month, VSCF asked 25 factories to provide a list of factory medical team members who are willing to receive vaccination. The list was forwarded to Gazipur Civil Surgeon’s office and they were enlisted for vaccination. Further, VSCF supported linkage activities to provide other factory workers and staffs with COVID vaccine.

The message is clear: Nobody is safe until all of us are safe.

When it comes to vaccines to protect people from the COVID-19 virus and its variants, we will need to ta global strategy

That’s the assessment of a recent study done by Atlanta-based CARE with help from the Booz Allen Hamilton consulting firm. It is part CARE’s larger Fast and Fair Vaccine Access Campaign – a two-year global vaccine initiative that began in 2020.

“None of us would be safe until all of us were safe,” Michelle Nunn, president and CEO of CARE, repeatedly said at a recent meeting of the Rotary Club of Atlanta.

Joining Nunn on the Rotary program (and repeating that theme) was Horacio Rozanski, CEO of Booz Allen Hamilton who also serves on CARE’s board. 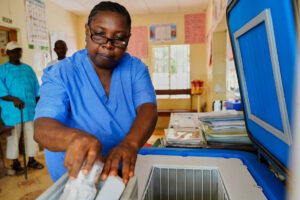 “For every $1 to develop the vaccine, it will cost $5 to put that in somebody’s arm,” Rozanski said. “To get to 80 percent of the world’s population, it will cost $190 billion.”

Rozanski called that number “staggering” – until one considers the cost of not doing it. The study estimated it could cost wealthy economies $4.5 trillion in economic losses if the pandemic is not brought under control through the global distribution of vaccines.

Currently, there’s a wide disparity on the availability and distribution of vaccines around the world.

As of July 1st, almost 25 percent of the world population had received at least one dose of a COVID-19 vaccine. But that percentage falls to less than 1 percent when examining vaccination rates in low-income countries.

“These variants are very dangerous,” said Rozanski, mentioning the highly contagious Delta variant now causing a surge of cases in several states. “With the virus, it’s the mutations we have to worry about.”

An investment of between $15 billion and $25 billion by the United States over the next three years could be “an insurance policy” to help lead a global response to protect the world from the pandemic and its variants.

The study also pointed out the global inequity that exists when it comes to the availability of vaccines. Wealth countries have already bought 53 percent of the most promising vaccines even though they account for just 14 percent of the world’s population. 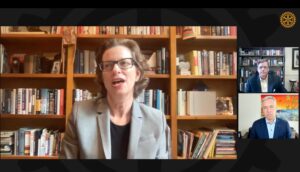 Michelle Nunn, president and CEO of CARE, makes at point during a virtual meeting of the Rotary Club of Atlanta on July 19 (Screenshot)

Wealthier countries, however, have many reasons to support the global distribution and injection of vaccines. Rozanski mentioned several:  national security, the economy, humanitarian concerns as well as equity and equality.

Nunn agreed. “Our national security is so dependent on global health,” she said.

As dire as the statistics are today, Nunn said “it is also solvable” if government, nonprofits and corporations work together to tackle the global challenges.

There is no better place for that to happen than in Atlanta – a center of gravity for global health and development.

“This is a generational challenge,” Nunn said. “Let’s create the infrastructure. We do know how to vaccinate the world. Delivery is a major issue.”

The institutions are already here. They include: the Centers for Disease Control and Prevention, the CDC Foundation, the Task Force for Global Health, the Carter Center, Emory University, MAP International, MedShare, CARE to name a few.

On the corporate side, Atlanta also is well-positioned – especially when it comes to the delivery of the vaccines. UPS is a global leader in logistics and delivery. The Coca-Cola Co. has one of the most comprehensive global networks in the corporate sectors through relationships with its bottlers. And Delta Air Lines is one of the most interconnected airlines in the world.

We know institutions in Atlanta and Georgia can play a critical role in responding to the global challenges of distributing vaccines to developing countries around the world.

In short, Atlanta can design today’s equivalent of the “Marshall Plan,” a U.S. sponsored program implemented after World War II to help European countries destroyed by the war. 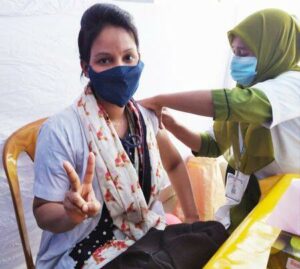 Woman receives an injection against the Coronavirus (Special: CARE)

That parallels the founding of CARE 75 years ago – a nonprofit formed in the wake of World War II to support survivors with lifesaving food and supplies by sending CARE packages to war-torn countries.

A host of local institutions are already working in the field of vaccine distribution. But with greater coordination, we can create an “Atlanta Plan” to aggressively expand the availability and distribution of vaccines to low-income countries.

“Atlanta is at the heart of this,” Nunn said.

But she instinctively knows more can be done with the entities already here – listing a host of nonprofit players based in Atlanta that “should join forces” and work with “private sector leaders like Coca-Cola and UPS that have unparalleled logistical and supply chain capacity,” she wrote in a follow-up email.

“I think the world and the United States are still underestimating and under-investing in the global vaccination effort,” Nunn said. “It is going to take an unprecedented effort of cooperation and collaboration. If there was ever a time for new ways of working together, this is certainly it.”