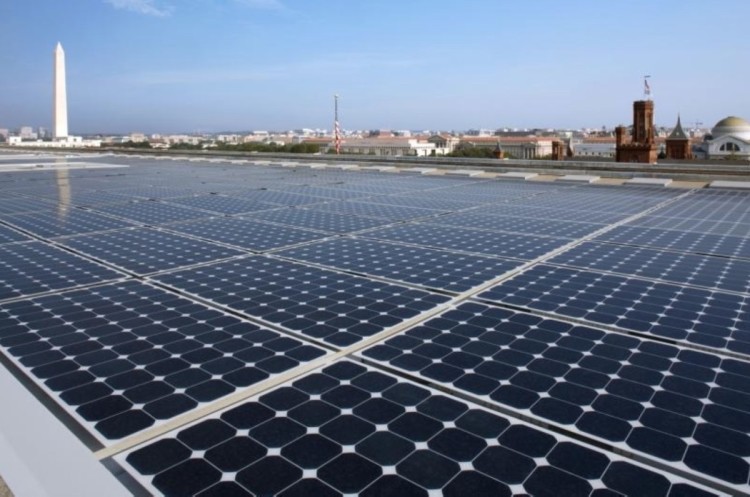 Atlanta Mayor Kasim Reed announced plans to install solar panels on 28 public buildings. These panels are installed on the roof of the federal Department of Energy's Forrestal Building in Washington. Credit: energy.gov

Atlanta became the first city in Georgia Monday to establish a solar plan to install solar panels on public buildings, a major move in the city’s efforts to become more sustainable. 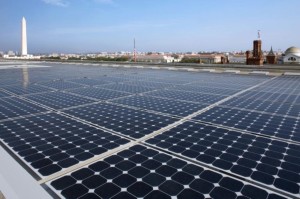 Atlanta Mayor Kasim Reed announced plans to install solar panels on 28 public buildings. These panels are installed on the roof of the federal Department of Energy’s Forrestal Building in Washington. Credit: energy.gov

“Installing solar on city buildings is one of our top recommendations to cities interested in going solar,” Jennette Gayer, an advocate for Environment Georgia, said in a statement after joining Atlanta Mayor Kasim Reed in announcing the solar program.

“First, you save money,” Gayer said. “The city is about to cut electric usage (and bills) at their new solar properties nearly in half. Second you help the environment; you’ll be reducing global warming emissions and the need for power plants that pollute our air and gobble up our water.

“Finally, and perhaps most importantly, you are providing the visionary leadership that it will take to inspire others in Atlanta to do the same,” Gayer said.

Reed positioned the solar initiative as progressive, one that is projected to reduce the city’s carbon dioxide emissions by 73 million pounds and save 216 million gallons of water through the year 2030.

“Solar Atlanta moves the City of Atlanta one step closer to protecting our environment for future generations and toward our goal of becoming a top-tier city for sustainability,” Reed said in a statement. “Soon more than two dozen of our well-used community centers and public safety facilities will be powered in part by clean, affordable energy. With the Solar Atlanta program, the city will reduce our carbon footprint, conserve water and demonstrate our commitment to our values.”

These solar panels are atop the main facility of the Atlanta Community Food Bank. File/Credit: David Pendered

Stephanie Benfield, who directs the mayor’s Office of Sustainability, touched on Gayer’s notion of the importance of governments adding solar panels.

“It is my hope that the City of Atlanta will serve as a model for other cities and private commercial buildings to take advantage of power purchase agreements to finance their own solar installations,” Benfield said in the statement.

Gov. Nathan Deal signed the Solar Power Free-Market Financing Act of 2015 into law this year. House Bill 57 is intended to allow owners to secure third party financing to pay for the installation of solar energy technology.

Although solar power is not part of the federal Better Buildings Challenge, in which Atlanta participates, it does foster the same objectives – a reduction in energy and water consumption.

The BBC aims to reduce consumption of energy and water by 20 percent by 2020, using 2010 as the base year. BBC operates by improving the operational efficiency of buildings. Reed announced in August that owners of 100 million square feet of buildings have agreed to participate.