The Atlanta Fed released Wednesday an anecdotal report of economic activity that shows the South remains a bit of an outlier in relation to the rest of the nation. The differences were both positive and less than positive as the Federal Reserve is likely to consider a rate hike next week.

Tourism is a positive in the South, according to the June 1 edition of the Beige Book:

Atlanta’s luxury hotels and other markets in the South are enjoying strong occupancy rates and strong advance bookings going into the summer months, according to a report released Wednesday by the Atlanta Fed. Credit: Wikimedia.org

In tourism capitals elsewhere in the country, the news was less than positive. Particularly in New York and the Midwest:

Kansas City observers reported a similar dip, with little optimism for a rebound in coming months:

This edition of the Federal Reserve’s Beige Book is of note because it is one of the final economic indicators to be released before the Federal Reserve’s monetary policy committee meets next week. Consideration of a potential rate hike likely is on the agenda. A rate hike would be just the second since the Great Recession, following a hike in December 2015.

Rajeev Dhawan, the head of Georgia State University’s Economic Forecasting Center, has issued a report last week in which he discounted the likelihood of a rate hike.

Atlanta Fed President Dennis Lockhart told CNBC on May 5 that he was, “on the fence” about a rate hike.

Lockhart said factors important to him include the May jobs report, to be released Friday, and details of the rate of economic growth.

The anecdotal jobs report issued by the Atlanta Fed is decidedly mixed.

On one hand, businesses reported signs of a tightening labor market. Companies are adding to payrolls. Employee retention is becoming a bigger issue as workers are wooed to other firms or take other jobs. Businesses report a shortage of labor for positions both skilled and lower-skilled/entry level.

On the hand, the Atlanta Fed reported that whatever labor shortage may exist, it’s not great enough to trigger wage increases in the South: 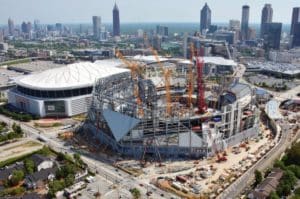 Construction projects including the Mercedes-Benz Stadium are adding to the list of jobs in commercial construction available in the South. mercedesbenzstadium.com

Rather than considering pay hikes, the minimum wage was the big issue business observers reported to the Atlanta Fed:

Elsewhere in the country, wages are rising, according to Fed reports: