Atlanta has $68 million in cash, access to $200 million in debt, in development fund for blighted areas

Atlanta is sitting on at least $68 million in cash, plus more than $200 million in borrowing capacity, in a program designed to foster development in blighted neighborhoods.

The cash and available debt evidently has accrued as a result of the bust in real estate development. With so few projects brought forward by the private market, the city’s program to help them – a program fueled by property taxes – has laid fallow. Few parks, sidewalks, roads or sewers have been created or even upgraded with the special fund during the downturn, even as its coffers swelled.

Competing proposals to manage the cash and debt capacity are expected to emerge from two recent reviews. 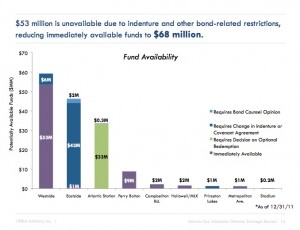 This chart shows the amount of cash available in each TAD, except the Beltline. Credit HR&A

One review of the fund was conducted by a consultant retained by the city arm that controls the program – Invest Atlanta, the former Atlanta Development Authority. One of the consultant’s recommendations was approved last week by the board that oversees Invest Atlanta – the creation of an $8 million fund for owners to retrofit downtown office buildings.

Another review and set of recommendations for the development program is coming from Leslie Ward, the city’s independent auditor for 11 years. Ward said Invest Atlanta has reviewed a draft of her review and returned it with proposed revisions. Ward said the City Council will receive a final version of her report around the third week of May.

Ward said she was unaware that Invest Atlanta was conducting its own review of its development program. Ward made that remark after a committee of the Atlanta City Council invited her to speak after a presentation by Invest Atlanta’s president and CEO, Brian McGowan, and his team. The mayor, who chairs the Invest Atlanta board, was not present.

“We were not aware of this (Invest Atlanta) study until we were fairly far into our data collection,” Ward said at an April 24 meeting of the City Council’s Community Development Committee.

“My quick assessment is our analysis of the situation is not much different,” Ward said. “In our analysis of options and issues going forward, I think you will see some differences. So that’s the status, and thanks for asking.” 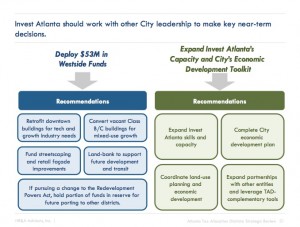 The amount of money available to jumpstart development is a testament to the success of the city’s TAD program. TAD stands for tax allocation district, and Atlanta has used the concept to help build projects including Atlantic Station, Atlanta BeltLine, Georgia Aquarium, and the future Center for Civil and Human Rights.

The state Legislature authorized TADs in 1985 in order to spur developments in blighted neighborhoods. Atlanta has led the state in their use, creating 10 districts and borrowing money through the sale of bonds to build roads, sewers, parking structures, parks, and other public amenities.

These improvements enable the private sector to build a project in what otherwise was a run-down neighborhood. The bonds are paid off with property taxes collected on new developments in the TAD. City taxpayers are not obliged at all to pay off the debt if the development fails to pay its own way.

The city evidently has the $68 million in cash because the money accrued as taxes collected, and little was disbursed because of the scarcity of developments proposed in blighted neighborhoods. The same holds true with the debt capacity.

In all, the city has invested $560 million in TAD funds to help finance $3.4 billion in development. Property tax collections have increased $393 million over a number of years that was not specified in the report by HR&A, the consultant hired to review the city’s TAD program.

“The program appears to have been quite successful,” Candace Damon, vice chairman of HR&A, told the Atlanta City Council’s Community Development Committee.

Previous Article
Atlanta airport concessions woes: City Council meets with mayor in executive session, opts to do nothing
Next Article
Big decisions ahead for northwest corridor to Cobb — namely bus or rail