This story has been updated to correct the school attended by a student who is to make remarks at an event Wednesday, and the date of a ribbon-cutting ceremony.

In some Atlanta neighborhoods, a $50,000 grant to fix some basketball courts isn’t that big a deal.

This isn’t one of those neighborhoods. 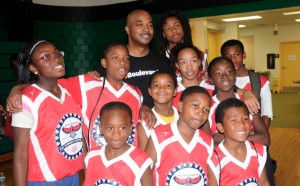 The corridor along a road called Boulevard, which passes Atlanta Medical Center just east of Downtown, is a rare place in Atlanta. It is a community of severe poverty flanked by neighborhoods of comfortable homes. Boulevard is a place where the grant from the Atlanta Hawks Foundation that’s to be announced Wednesday morning at Central Park is expected to make a big difference in the lives of its young men and women.

The grant is the largest made to date in the yearlong “Year of Boulevard” program sponsored by Atlanta City Councilmember Kwanza Hall. The goal is to improve the quality of life in a community where household income is said to be among the lowest in the southeastern U.S.

“Our government and corporate partners have been key to the progress we’ve been making along Boulevard this year,” Hall said. “The Atlanta Hawks Foundation is the gold standard for their commitment to the youth and families of the corridor. We are so grateful for their participation.” 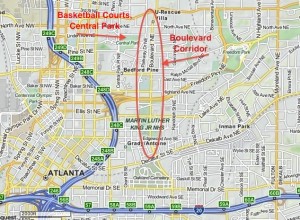 The Boulevard corridor is east of the Downtown Connector. Credit: Mapquest, David Pendered

Basketball is a big part of the youth culture along Boulevard. It’s a focal point for young men in a community where men are a scarcity.

Women are in charge of most homes in the area. Of about 700 families, most of them in the Bedford Pine apartments, just 25 families are headed by a man, according to reports from the city.

The four basketball courts at Central Park are a gathering spot for some 500 youngsters who meet to play regular pick-up games. The courts have been in disrepair for years, but the youngsters have played on.

The $50,000 grant award from the Hawks Foundation promises to repair all the courts. The work is to begin Sept. 24 and be finished by the end of October.

If all goes as planned, the Hawks will have defeated NBA championship team Miami Heat in a preseason opened on Oct. 7 and gone on to have a great preseason of play.

The young men and women of Boulevard should have found their own shooting style by the time the Hawks begin regular season play against Houston, at home on Nov. 2.

The spotlight will shine on one of the local teenagers who’s slated to speak at the announcement of the grant. The youngster attends Intown Academy, plays on the school’s basketball team and is being reared by a single father.

Young people are a big part of the outreach effort. In July, Fulton County Commissioner Joan P. Garner participated in a block party that was attended by more than 900 children and family members.

During the summer, youngsters benefits from internships by area businesses including Southface, SoundTable and Horizon Theatre. The UGA Terry College of Business, and others, reached out to sponsor entrepreneurship classes for teens on Saturday mornings.

The celebration of Boulevard is slated to continue on Oct. 28, when Atlanta Hawks players are slated to come to the ribbon-cutting ceremony at the basketball courts that are to be refurbished at Central Park.