Atlanta Hawks honored by the General Assembly and Gov. Deal 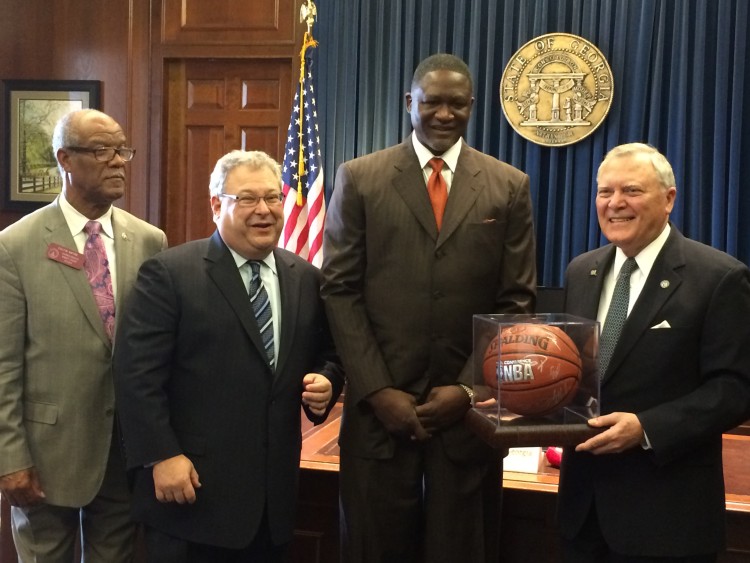 For the first time in the history of the Atlanta Hawks franchise – at least as far as folks can remember, the team was honored by the Georgia Legislature on Tuesday.

State Rep. Calvin Smyre (D-Columbus) started planning back in December for the Hawks to have a special day during the 2015 session. 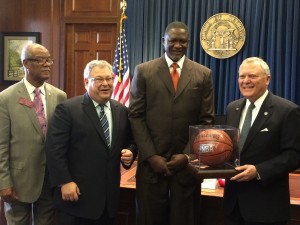 “The timing couldn’t have been better with the 16-game winning streak,” Smyre said of Tuesday’s events at the State Capitol.

Hawks legend Dominique Wilkins as well as Hawks President and CEO Steve Koonin were presented with proclamations at both chambers – the House and the Senate.

Then they went to visit with Gov. Nathan Deal for a private chat about the team and a short photo opportunity with the media. They later were to be joined by a couple of current Hawks players who were to be available to meet with members of the General Assembly. 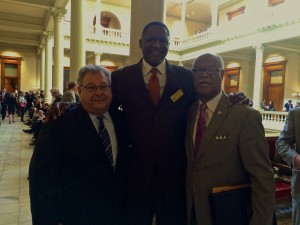 Dominique Wilkins said he personally had been honored when he had been made ambassador for diabetes for the state of Georgia, but that wasn’t done as an honor for the Atlanta Hawks.

Gov. Deal was pleased to be able to share some of the Hawks’ winning spirit, and he seemed especially happy when Koonin invited him to come to any game of his choice.

“We are all proud of the Atlanta Hawks,” Deal said, adding that it gives Georgia another reason to boast about its success. “We are looking forward to a championship at the end of the year.”

Currently, the Atlanta Hawks are enjoying a tremendous season with a record of 37 wins to 8 losses. It is first in the NBA’s Eastern Conference. Its 16-game winning streak is the longest in the history of the franchise.

Previous Article
It’s almost February; how are your resolutions? What are you putting on or giving up?
Next Article
Reflectons 50 years after Atlanta’s dinner honoring Martin Luther King Jr. for his Nobel Peace Prize