In response to passionate protests from the preservation community, the Atlanta Housing Authority has halted the demolition of 20 Hilliard St. in the historic Martin Luther King Jr. Landmark District.

The 1910 building, also known as the Trio Laundry Dry Cleaning building, remains fenced off. It is just a few feet south of Edgewood Avenue and just blocks away from the King Center. 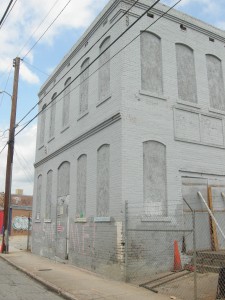 Preservationists had been told demolition was to have begun in earnest this past Monday. But protestors have been showing up at the site every morning this week and have reported that there has been no activity on the site.

In an interview at Thumb’s Up diner on Edgewood Avenue Wednesday morning, Atlanta Housing Authority Chairman Daniel Halpern confirmed that the agency had put the demolition on hold.

“We are halting demolition until we do further review on both the structural integrity of the building and the environmental remediation requirements,” Halpern said. “We want to be responsive to the concerns of the preservation community.”

Halpern said that when the building was originally acquired by the Atlanta Housing Authority in 2008, the plan had been to remediate the soil and to demolish it. He also made a point of saying that those decisions were made during a different administration and a different board.

According to a release issued by the Atlanta Housing Authority Wednesday afternoon, the building’s roof collapsed in 2012, prompting the City of Atlanta to declare the building unsafe.

AHA has retained the Historic Preservation Studio of Lord Aeck Sargent to determine if the building is salvageable. A preliminary assessment Tuesday showed that bracing the building’s exterior walls could allow for engineers to delineate the extent of soil contamination.

“Based on the results of the delineation, a subsequent determination will have to be made as to whether the required remediation can take place without impacting the structural integrity of the building,” said Joy Fitzgerald, interim CEO of the Atlanta Housing Authority, in the release.

In addition to the soil contamination and the building’s structural integrity, several other issues will need to be reviewed  such as what legal options AHA has regarding future use of that property and whether the building is salvageable. 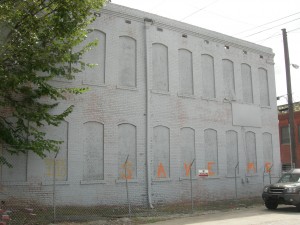 20 Hilliard St. with “SAVE ME” painted on the boarded up windows

“We want to work collaboratively with the preservation community to find a solution,” said Halpern, president and CEO of Jackmont Hospitality, a company founded by the late Atlanta Mayor Maynard Jackson, members of his family and Halpern.

When Halpern became aware of the issues surrounding 20 Hilliard St. late last week, he was hit with the symbolism of what was taking place.

“If you can’t advocate for a just cause in the King district, then where can you?” Halpern asked rhetorically during the interview.

The protests to save 20 Hilliard St. has been active on social media with its own Facebook page as well as efforts by preservationists to contact officials with the City of Atlanta and the Atlanta Housing Authority.