Atlanta is poised to enact a new animal ordinance drafted by Mayor Kasim Reed’s office that does not ban the use of “bullhooks” to control elephants.

Bullhooks are specifically banned by a Fulton County animal ordinance, which would have prevented the use of the barbed sticks in February by the Ringling Bros. and Barnum & Bailey Circus. The circus won the right to use bullhooks to control elephants through a lawsuit it filed against the Fulton County.

The mayor’s office intends for the Atlanta City Council to vote June 18 on the proposed animal ordinance, according to the legislation. That’s likely to be a busy day for legislation, given that the council also plans to approve a citywide budget of $540 million for the fiscal year that begins July 1. 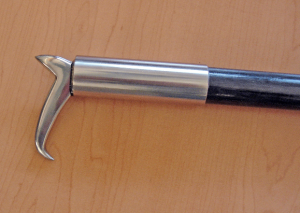 The proposed animal ordinance is slated to be considered Tuesday by the city council’s Public Safety Committee. If the committee approves the proposal, it is to be on the council’s June 18 agenda for a vote without discussion – unless a councilmember asks for it to be discussed.

The city’s proposed legislation would tighten the city’s animal ordinances by adopting codes for use in the portion of Atlanta within Fulton County.

The proposed ordinance largely tracks Fulton County’s ordinance, which is used through the portions of Atlanta that are in Fulton County.

But the city’s proposal does not specifically ban the use of bullhooks and appears to contain only the following definition of animal cruelty: 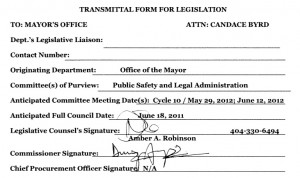 Mayor Kasim Reed's office has proposed animal ordinance that does not ban the use of bullhooks on elephants. Credit: City of Atlanta

That language is identical to the wording of the Fulton County animal ordinance that now rules in Atlanta-in-Fulton. The similarities don’t stop there.

Atlanta’s proposed legislation, like the county’s ordinance, goes on to address issues including animals that run at large, security animals, confinement of female dogs in heat, and skunks and foxes.

However, Atlanta’s proposed ordinance does stop short of including a section in Fulton County’s code that specifically addresses cruelty to elephants. The county’s code reads:

(a) As used in this section, the term “bullhook” shall mean a device or instrument containing a spike, hook, or any combination thereof. A bullhook is also known as an ankus, ankusha, elephant goad, or elephant hook.

(b) It shall be unlawful for any person to use a bullhook on an elephant within any area described in section 34-201(a) of this chapter.

(c) It shall be unlawful for any person to use on an elephant any device or instrument that inflicts pain on, or causes or is likely to cause injury to, an elephant, except as necessary to administer legitimate medical treatment or in response to an immediate threat to public safety.

Atlanta already has animal ordinances for the portion of the city within DeKalb County, according to the proposed legislation.

Controversy over the city’s animal ordinances unfolded in February, when Fulton County notified the circus that it intended to enforce its ban on bullhooks. County officials told the circus that if bullhooks were used, the county may seek to impose criminal penalties and impound elephants.

Lawyers with Troutman Sanders filed a lawsuit against the county on behalf of the circus. Fulton County Superior Court Judge John Goger ruled the ordinance did not apply within the city.

The performances went on, as did protests over the circus’ use of bullhooks

Previous Article
‘Moonrise Kingdom’ — neither ‘stupid nor offensive,” but also not enchanting
Next Article
College student improves his odds by developing business relationships