As crowds on Sunday depart the Atlanta Jazz Festival, they have some unlikely sponsors to thank for the free entertainment – travelers who have rented cars at Atlanta’s airport. 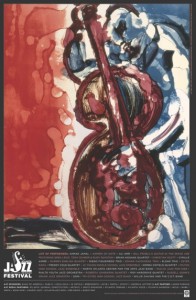 “Bopping at Birdland,” the signature poster for the 2014 Atlanta Jazz Festival, was created by Romare Howard Bearden and used with permission of the Bearden Foundation. Credit: atlanta festivals.com

Atlanta provided up to $100,000 to the festival from the city’s motor vehicle excise tax. Citing a decline steep decline in sponsorship due to the economy, the Atlanta City Council voted unanimously to approve the funding at its April 21 meeting.

The festival was established in 1978 by then Mayor Maynard Jackson. Today the event is produced by the Atlanta mayor’s Office of Cultural Affairs.

The legislative paper that provides the funding states that the executive director of the Office of Cultural affairs “desires” that funds from the motor vehicle excise tax be used to support the Jazz Festival. Atlanta Councilmember C.T. Martin sponsored the legislation.

Mayor Kasim Reed now has direct control over the Office of Cultural Affairs. Jackson created the office in 1974 and last year it was moved from the city’s parks department into the mayor’s office, along with its control over popular programs including the Chastain Arts Center and Atlanta Cyclorama and Civil War Museum.

The Jazz Festival funding legislation noted that state law provides for the excise tax to be spent on purposes that include the promotion of “trade, commerce and tourism in the city.”

According to the paper:

In keeping with the times, the festival offered a jumbotron Twitter wall. It provided a branding opportunity and was priced at $5,000.

Another sponsor is the non-profit Atlanta Jazz Festival, Inc. The non-profit entity is registered with the Internal Revenue Service, but its revenue, expenses, 990 tax forms and other financial information is not available, according to guidestar.com. GuideStar’s website says it tracks non-profits in order to provide more transparency that be may of use to charitable donors.

This is the history of the Atlanta Jazz Festival, according to the rate sheet:

The sheet quoted Atlanta Mayor Kasim Reed as saying: “The Atlanta Jazz Festival is our homage to the legacy and tradition of a true American art form.”