Atlanta Mayor Kasim Reed is disappointed that U.S. Secretary of Transportation Ray LaHood is stepping down.

Reed and LaHood had developed a strong relationship over the past four years — a relationship that has been beneficial for both Atlanta and Georgia.

“I really wanted Secretary LaHood to continue because he could not have been a more active transportation secretary,” Reed said after the Buckhead Coalition’s annual meeting on Wednesday. “The department worked very well under his stewardship.” 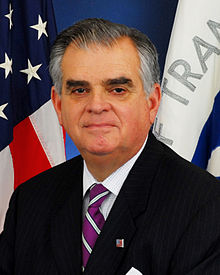 LaHood, who was a Republican congressman before joining President Barack Obama’s administration, helped secure a $47.7 million grant from the federal government for the Atlanta Streetcar project.

LaHood also has been one of the main contacts for Reed and Gov. Nathan Deal in their efforts to deepen the Port of Savannah. That project has received most of the necessary federal approvals during Obama’s first four years, but the project still needs hundreds of millions of dollars in federal funding in order to be realized.

Reed also credited LaHood for Georgia receiving a $270 million low-interest loan in 2011 from the U.S. Department of Transportation to build new toll lanes along I-75 and I-575. Because of his relationships with the Obama administration, Reed was instrumental in getting that project funded even though all of it is outside the City of Atlanta.

“The progress we made on the port never would have happened had it not been for Ray LaHood,” Reed said Wednesday.

At an air cargo conference in Atlanta last October, LaHood told the attendees that Reed was one of his favorite mayors in the United States.

“He and I have become very dear friends, and we have worked on many different projects,” LaHood said at the time. “I have never really met as dedicated a mayor as here in Atlanta. Kasim, you and I have been great partners.”

With LaHood’s departure, it is not known what impact that will have on Georgia’s ability to get funding to deepen the Savannah port.