Atlanta Mayor Kasim Reed predicted Wednesday that metro Atlanta voters will reject the sales tax referendum for transportation in 2012 if the campaign is run by the current team of consultants.

The team consists of four white men – one from Alabama, two from Virginia and one from Marietta. 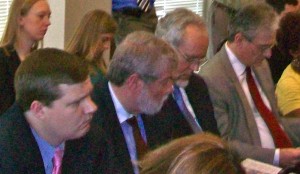 “The notion that this is the team … is stunning to me,” Reed said. “This is a huge problem, and if they want to go down this road and assemble a team that’s not inclusive and resembles this region, we’re going to lose.”

Tad Leithead, chairman of the Atlanta Regional Commission, responded that the team eventually will hire local vendors who will reflect the region’s diversity.

“They intend to build a campaign team that is locally focused [and] inclusive of all points of view,” Leithead said. “The campaign itself [will be] inclusive of the diversity of the region, whether from an ethnic standpoint, gender standpoint or transportation standpoint.”

The exchange between Reed and Leithead occurred at two separate points in what was to be a routine meeting of the 10-county Atlanta Regional Transportation Roundtable. Reed made his comments near the beginning. Leithead rebutted Reed at the very end of the event.

Diversity was just one challenge Reed issued at the last roundtable meeting scheduled before a significant report is issued by the state Transportation Department. GDOT is to release on June 1 a list of all the road, transit and trail projects that could be built if money were not an object.

Reed questioned the value of public opinions the ARC has gathered through 12 focus groups and a telephone survey of about 1,400 respondents that was conducted by Kennesaw State University.

“Producing a document and taking up the time of the roundtable for something that isn’t scientific – I appreciate the work you do, but would have preferred to have a 1,600 sample poll done by a first rate firm, and then have an instrument we can be serious about and take to the 10-county area,” Reed said.

Leithead addressed Reed’s comment by noting that the region is entering a marathon of public education and an actual campaign for the penny sales tax, which is on the July 31 ballot.

“We’ve put together an intelligent team that can do that, but it is a marathon,” Leithead said. “It will be a scientific process. As that comes together, very very scientific polling will be done [with] as many as 2,000 people so the numbers we get will be extremely informative.”

This is how Lawler described the phone calls to the members of the roundtable:

“People are called and invited by a message you’ll record, and to ‘Stay on the line with myself and [another  roundtable member]. And a brief introduction of what it is. Then you field calls throughout the hour-long timeframe.

“Everyone who participates will get an answer. We’ll ask their opinion on specific things…. We wil lknow afterward who stayed on the phone and for how long and what parts of the county participate.

“All these tools have limits, but this is an opportunity to reach a lot of people very quickly.”