Atlanta Mayor Reed: Boko Haram “could not be more wrong” in kidnapping girls for slave trade

Atlanta Mayor Kasim Reed has added his voice to the international chorus criticizing an Islamist terrorist group for kidnapping school girls in Nigeria and praying for the girls and their families.

“My thoughts and prayers go out to the families and friends of the more than 200 Nigerian girls kidnapped three weeks ago from the Government Girls Secondary School,” Reed said in a statement released late Wednesday.

Reed is slated to visit Nigeria in October as part of a trade mission that includes South Africa. Reed also is scheduled to join Gov. Nathan Deal in speaking in August at the Nigerian American Investment Summit, in Atlanta.

Reed continues to foster Atlanta’s relations with African nations. He said in February that Africa would be “at the forefront” of Atlanta’s international efforts this year, according to a report in globalatlanta.com. Reed serves as honorary chair of Africa Atlanta 2014, which is a citywide series of events aimed at, “reinventing the cultural and economic bonds among Africa, Europe, and the Americas.”

Nigeria already has a significant role in the U.S. economy. According to the Secretary of State’s page on the country: 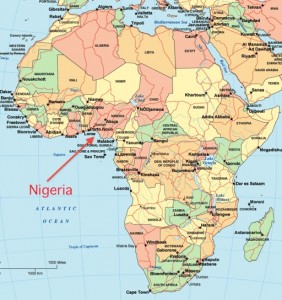 Nigeria is familiar with domestic turmoil and the situation has worsened with the kidnapping of 300 school girls by a terrorist organization. Credit: map-of-africa.us

The kidnapping situation has prompted President Obama to send to Nigeria a team of law enforcement, hostage negotiators and intelligence experts. The immediate mission is to find the girls and return them to safety. Obama said the broader issue involves the containment of Boko Haram.

The Islamic group has long targeted girls as soft targets, according to published reports. But it drew international outrage after a leader posted a video claiming credit for the kidnapping of more than 300 teenage girls and threatening to sell them into slavery. At least some of the girls likely have already been smuggled into neighboring Cameroon or Chad, according to published reports.

On April 15, more than 300 girls were kidnapped from a secondary school in northeast Nigeria by the terrorist group Boko Haram, a name that translates to “western education is sinful,” according to published reports. Of this group, 53 girls escaped and 276 remain captive. On Tuesday morning, authorities determined an additional eight girls had been taken captive.

Response to the kidnappings has gone viral, with the sentence, “bring back our girls,” being mentioned more than 800,000 times on Twitter, according to an ABC report. CBS news reported that the hashtag, #bringbackourgirls, has been included in more than 1 million tweets.

This is the full text of Reed’s statement on the kidnappings: