Cascade Springs Nature Preserve received $300,000 Tuesday to help fund improvements at a park that was thrust into the limelight when Mayor Keisha Lance Bottoms met there with WABE’s Rose Scott to talk about her decision to not seek reelection. 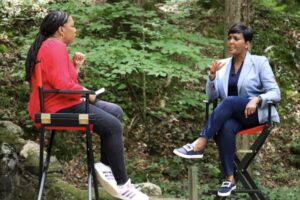 Cascade Springs Nature Preserve was a destination even before its profile was raised by the conversation there for a WABE radio program. Credit: facebook.com/FCSNP2019/

In addition, the Atlanta City Council voted Tuesday to create a lockbox to protect $100,000 it has approved to pay consultants to work on ongoing planning of the Chattahoochee RiverLands project.

The Department of City Planning requested the money be parked in a new “special project fund” to ensure it doesn’t get diverted to uses other than planning for the 100-mile-long greenspace concept. The coronavirus delayed work in 2020 on which the money otherwise would have been spent, Kevin Bacon, of City Planning, told the council’s Finance Committee on June 30.

Cascade Springs Nature Preserve already was a regional destination before the limelight arrived with the Bottoms/Scott program. The preserve has an extensive trail network that passes Utoy Creek and Cascade Falls – all while meandering through one of the larger old forests in the city.

The interview brought additional attention to the park, as the mayor and Scott spoke there and at the home of the mayor’s late grandparents. The conversation was reportedly the first long talk the mayor had with the media to explain her reasons for not seeking a second term as mayor. The episode of “Closer Look,” with Rose Scott speaking with the mayor, is available here.

The park’s advocates paid attention and offered three comments on the Facebook page of Friends of Cascade Park Nature Preserve. One was germane to the nature preserve. The others related to the city’s tree removal policies: 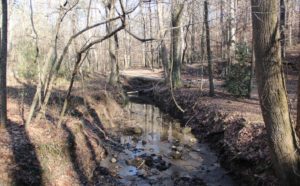 The Friends of Cascade Springs Nature Preserve, traversed by Turkey Foot Creek, received a Park Pride grant for improvements including a more welcoming greenspace with an ADA-accessible pedestrian entrance, more places for people to gather, and increase safety with lighting. Credit: wikimedia.org

On Tuesday, the Atlanta City Council voted to allocate $300,000 to improve the entrance to the nature preserve. The main entrance faces Cascade Road, which is a busy east-west connector that links Downtown Atlanta with I-285 and Fulton Industrial Boulevard.

Atlanta City Councilmember Marci Collier Overstreet, who represents the area, found the money for the project in the city’s $250 million Renew Atlanta Bond program. Voters approved it in 2015.

Specifically, Overstreet was able to shift the money from one ADA project in her district to pay for ADA improvements at the nature preserve. The bond provided a total of $8.5 million in ADA projects, according to the latest readily available budget update. City policy allows these funds to be shifted among ADA project in the same council district.

Overstreet offered this comment before the council’s Transportation Committee voted June 30 to shift the funding:

Park Pride’s executive director, Michael Halicki, said Tuesday that Park Pride’s contribution to the project involves improving the overall gateway to the park. A snippet from the project description Halicki observes states the goal is to create:

The legislation does not identify the project from which the money was taken, and it was not mentioned during the June 30 meeting of the council’s Finance Committee. Overstreet’s proposal was approved unanimously, as is the custom with the council deferring to the wishes of a district representative.