Atlanta is poised to ask the ARC to help fund a $200,000 study intended to help guide the redevelopment of neighborhoods surrounding Turner Field. 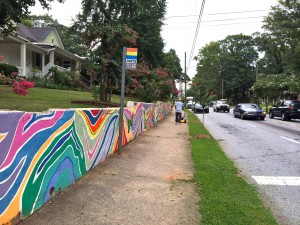 Civic pride is evident along some streets near Turner Field, including this wall facing Hank Aaron Drive, in a photo taken in July. Credit: Donita Pendered

The ARC would provide $160,000 and the city’s match of $40,000 would be provided by the city and by Invest Atlanta, the city’s development arm, according to legislation that’s due to be adopted Monday by the Atlanta City Council.

An urban renewal plan for the neighborhoods could extend the impact of the planned redevelopment of the ballpark and the 77 acres associated with it. Mayor Kasim Reed said last week that Turner Field could be sold, “very soon,” according to a report in ajc.com.

The sort of development being considered for Turner Field is exemplified in the plan by Georgia State University. GSU has proposed a $300 million complex with stadiums for football and baseball, shops, dorms for students, and housing for non-students.

The legislation the council is slated to approve Monday speaks only to the issue of funding. It does not address the scope of the study being requested. Atlanta councilmembers Carla Smith, Cleta Winslow and Joyce Sheperd sponsored the legislation.

The legislation states that Atlanta should apply for some of the funding the Atlanta Regional Commission has announced is available through the ARC’s Livable Centers Initiative program.

Pay phones are a rare sight in metro Atlanta, but still exist near Turner Field, in a photo taken in July. Credit: Donita Pendered

Specifically, the legislation requests help with funding a study that would cost up to $200,000. The city would have to provide a match of 20 percent of whatever amount of LCI funding is provided.

The LCI program intends to help local entities enhance their existing centers and corridors. The ARC’s website says the organization has approved the use of $18 million for LCI study funds from 2000 through 2017.

Two separate LCI studies are now underway in the city of Atlanta – one to evaluate the improvement of transit stations in the southern end of downtown; one to study transportation in the Vine City/Washington Park area.

The applications for these two studies illustrate the granular details that are devised before the studies begin. The following snippets are from the two applications:

In 1989, the Georgia Forestry Commission declared the black oak at Our Lady of Perpetual Hope to be the largest specimen of its kind in Georgia. Credit: Donita Pendered