Atlanta’s famed and beloved urban forest is to be expanded by about 4,000 trees by April 15, 2015 under an agreement with Trees Atlanta the Atlanta City Council is slated to adopt Monday.

Sheep and goats are to be grazed on public lands in an effort to combat invasive plants, according to another part of the pending legislation. Trees Atlanta promises that the grazing will be overseen by trained volunteers at no cost to the city. 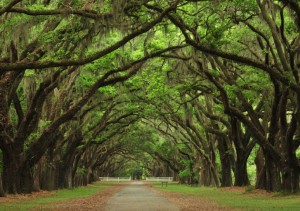 Atlanta is known as a “city in a forest” because of its extensive urban forest. Credit: Atlanta BeltLine

The planting comes at a time Atlanta’s trees have been stressed by years of drought, followed by a summer of exceptionally high amounts of rainfall that has saturated the soil.

The proposal calls for Trees Atlanta, an Atlanta non-profit, to plant the trees and nurture them for two years. The price for planting, maintenance and related programs is not to exceed a total of $839,000 and is to be funded – at least in part – from fees that have been collected when trees were cut, according to the pending legislation.

The first part of the program calls for the planting of about 4,000 small 15-gallon trees, at a cost not to exceed $796,000. The trees are to be distributed equally around the city, with each of Atlanta’s 12 council districts receiving at least 200 new trees.

Trees Atlanta is to select the species of trees to be planted. If the tree is a replacement, it is to be the same species as the original tree, so long as the species is compatible with the planting location.

To promote a strong attachment to the new trees, the plan calls for the trees to be planted by neighbors, Trees Atlanta volunteers, and school children.

Trees Atlanta is responsible for care that includes mulching and watering new trees. Tree Atlanta also is to replace any trees that die within two years unless they died due to vandalism, car crashes or “acts of God,” the later of which is not defined. Another caveat is that the number of trees planted to replace ones that die can be subtracted from the number of new trees that were planted as actual new plantings, and not as replacement plantings.

The second part of the program provides for a community outreach segment that intends to garner support for trees and create future stewards of trees. The total cost is set at $43,000 and contains four programs:

After Atlanta BeltLine’s next round of construction, Northeast Trail will directly connect to Piedmont Park
Hannah E. Jones April 15, 2022 1:01 pm

Cut a tree, plant a tree to preserve the city in the forest this Arbor Day