The Atlanta Streetcar is to run in both directions alongside the mixed use trail to be built along the Atlanta BeltLine, according to the city's transit plan. Credit: beltline.org

Atlanta’s original, $3.65 billion proposal for transit along the Atlanta BeltLine and Atlanta Streetcar could soon be adopted into the city’s comprehensive transportation plan, following a public hearing scheduled for Tuesday at Atlanta City Hall.

The Atlanta Streetcar is to run in both directions alongside the mixed use trail to be built along the Atlanta BeltLine, according to the city’s transit plan. Credit: beltline.org

The Atlanta City Council’s Community Development Committee has scheduled a public hearing at its Tuesday meeting, which is to begin at 12:30 p.m. This may be one of the final opportunities for the public to express opinions on proposed transit routes that ultimately could be embedded in the city’s 25-year transportation plan.

Proposed routes for the BeltLine and Streetcar were published in February 2014. Legislation to incorporate the routes into the city’s Connect Atlanta transportation plan was submitted in February 2014. The original paper has since been amended by the Community Development Committee.

The revision does not provide cost estimates for the proposed transit line. The entire project now is a priority, meaning segments will be built as money for them becomes available. The notion is to expand from existing Streetcar operations and connecting to other transit conections. Changes to the 2014 plan appear to include the addition of service mainly in the southern crescent. The total mileage was increased by five miles, to a total of 68 miles, for the combined BeltLine and Streetcar routes.

Notable changes include the addition of service from west of the Atlanta University Center, running north along Joseph E. Lowery Boulevard, then turning west on Joseph E. Boone Boulevard to a terminus just past the BeltLine; and south from Grant Park to just beyond the BeltLine. A planned route south of Turner Field has been shortened. On the northern crescent, service would be added along Northside Drive, from the BeltLine to North Avenue.

The original time line called for the Atlanta City Council to approve the legislation at its meeting on March 17, 2014, according to the BeltLine’s website. 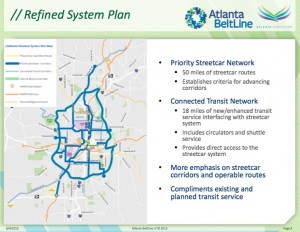 The Atlanta BeltLine, Inc. has provided $3 million in its budget that takes effect July 1 to design a 1.5 extension of the Atlanta Streetcar eastward along the Auburn Avenue corridor toward Krog Street, where the Streetcar would dead-end at the BeltLine.

In addition, Atlanta has submitted its application for $29.3 million in federal funding to help pay for the Streetcar’s extension toward Krog Street. The total cost of the project is estimated at $65.4 million. 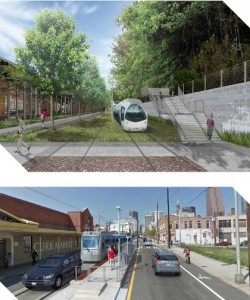 The $3.65 billion transit plan envisions the expansion of the Atlanta Streetcar to and along the Atlanta BeltLine. Credit: beltline.org

Time is becoming of the essence in transit funding in Georgia. This includes Atlanta’s two transit initiatives, which operate outside the funding universe of MARTA. Atlanta has chosen to design, build, and operate the BeltLine and Streetcar transit systems on its own, with MARTA providing technical support.

In January 2016, Georgia intends to award a total of $75 million to transit agencies throughout the state. In addition, Georgia likely will provide additional funding for transit in future years, according to Jay Roberts, Gov. Nathan Deal’s recently named chief of transportation planning. Roberts spoke June 10 at a GRTA meeting.

The next session of the state Legislature convenes in January and Deal has just three more budgets with which to cement his transportation philosophy. So far, Deal has ensured annual operating funds for GRTA, implemented a managed lanes system on which coach buses can travel, and embraced public private partnerships to fund construction.

By having routes for the BeltLine and Streetcar formally adopted into Connect Atlanta, the city’s transportation plan, city officials expect they will be better able to defend funding requests made of state and regional entities, according to language in the Connect Atlanta plan. 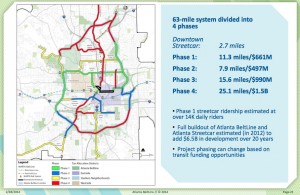 This is the 2014 version of a proposed $3.65 billion transit plan to develop the Atlanta BeltLine and Atlanta Streetcar. Credit: beltline.org