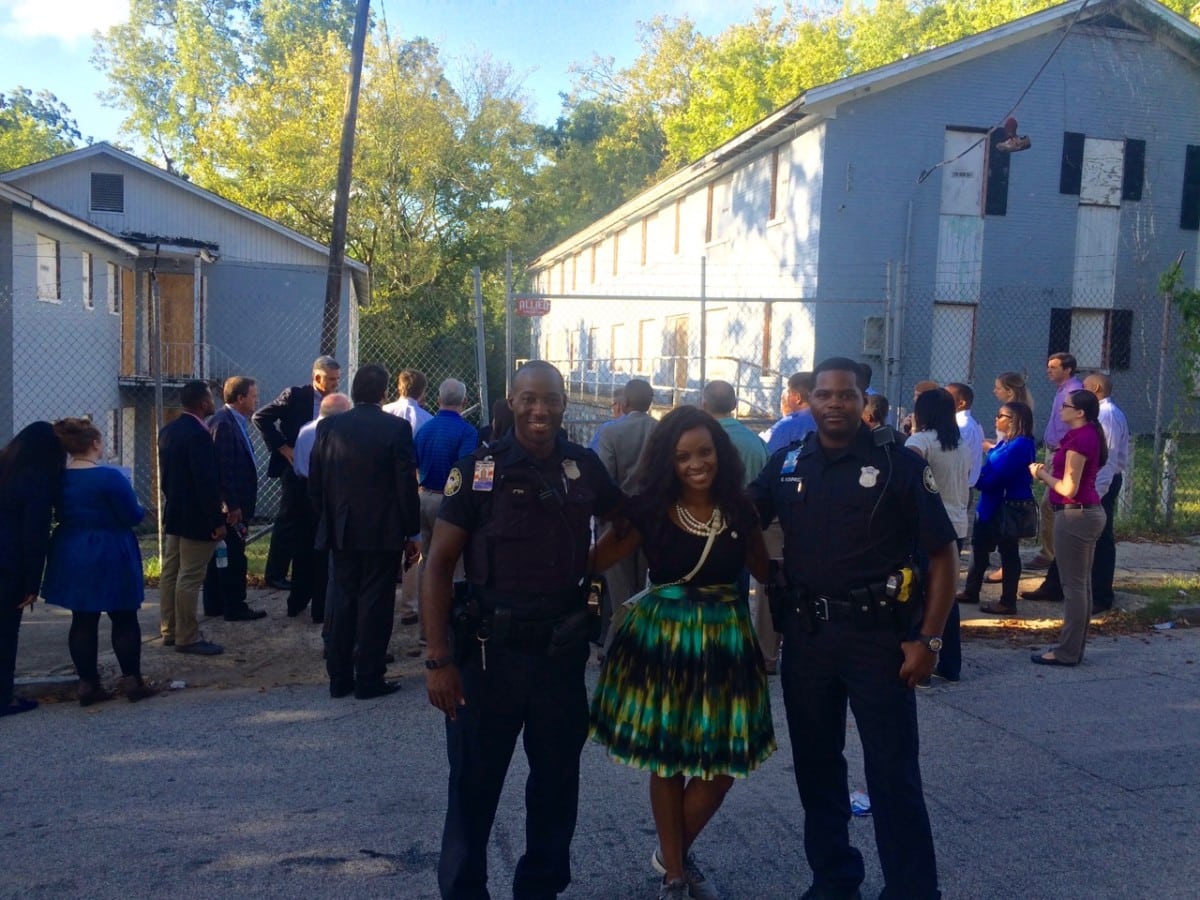 By Maria Saporta
As published in the Atlanta Business Chronicle on Sept. 30, 2016

The Atlanta Police Foundation, in partnership with several public and private entities, will be playing a major role in improving the lives of people living in the west side Atlanta communities.

The foundation has a multi-pronged effort underway in the communities of Vine City and English Avenue to address many of the public safety and community policing issues affecting the area. 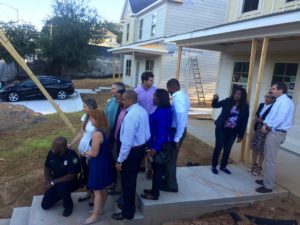 The Pulte Officer Home Build site. Pulte Homes is working with the Atlanta Police Foundation to have officers living on the Westside as part of a community policing effort. Five homes are being built along James Brawley Boulevard to house the first five officers and their families (one is pictured here). There will be a total of 20 to 25 officers living in the Westside when the program is completed. (Photo by Maria Saporta)

The foundation recently took members of its board and other guests on a bus tour of three major initiatives already underway.

First, Marlon Trone, the foundation’s vice president of programs, pointed out new security cameras that have been installed throughout the community — 120 in all. Already, that effort has helped reduce crime in low-income neighborhoods.

One of the major initiatives is building homes for Atlanta police officers to be able to live in the community and build relationships with their neighbors.

Five houses are currently under construction by Pulte Homes along James Brawley Boulevard. They are the first phase of what the foundation hopes will be a total of 20 to 25 homes for police officers in the two neighborhoods.

In return for living in those homes, officers will have extra duties to build community relationships and mentor young people.

For Jason Bain, one of the officers selected to live in the first five houses, said it “will be a major upgrade” for his family, including his two children. He’s already begun to see improvements in the community. 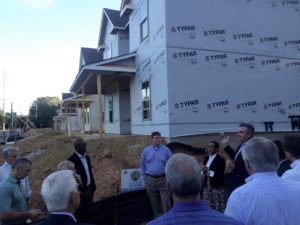 Dave Wilkinson, president and CEO of the Atlanta Police Foundation, shows members of his board as well as special guests where the first five officers will be living on the Westside. Five Pulte Homes are being built along James Brawley Boulevard. (Photo by Maria Saporta)

“I’ve been working here for most of the nine years I’ve been with the department,” Bain said. “My kids already know the neighborhood. There’s a lot of growth.”

Only 24 percent of APD’s officers live in the city, and the idea is to make living in the city more affordable. In return, officers bring a feeling of safety to a community and they can build meaningful relationships with the residents.

The next major initiative is providing housing for APD recruits.

The foundation is working with Preferred Apartment Communities, and its CEO John Williams, to renovate a vacant apartment complex at 750 North Ave. in English Avenue.

“Recruiting has become more and more difficult,” Wilkinson said. “There are 150 vacancies, and the Atlanta Police Department is going to be hiring about 300 officers per year. They can’t afford a place to live while they’re in the (police) academy.”

So the apartments, with the help of City Councilman Andre Dickens, are going to be renovated into upscale dorms. Work should begin early next year. 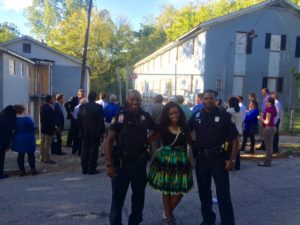 Atlanta Police Foundation’s Nikki Forman stands between two police officers who accompanied the tour of board members and guests on a recent tour of the foundation’s efforts on the Westside. (Photo by Maria Saporta)

“By next October or November, we would love to have it up and running for recruits,” Wilkinson said. “It will house between 48 and 60 recruits in the two apartment buildings.”

Wilkinson said the rent should end up being about $200 a month, and in return, the officers-in-training also will be building relationships.

“It’s about living in the community,” he said. “These guys also are going to be working at the youth center.”

Just a couple of blocks away — in a long-vacant Head Start center at 740 Cameron Alexander Blvd. — the Promise Youth Center is about to be created by the APF and partner, real estate firm Carter. 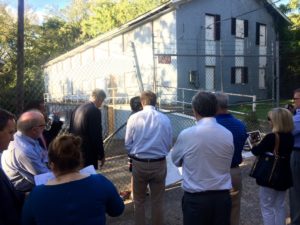 Board members of the Atlanta Police Foundation look over plans for the the new Recruit Housing site. (Photo by Maria Saporta) 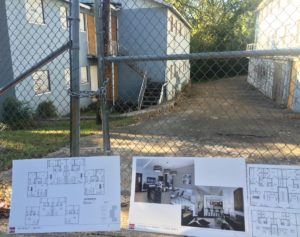 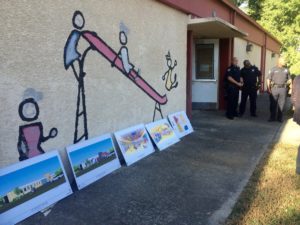 The Promise Youth Center is one of the biggest projects the Atlanta Police Foundation is launching – as a way to divert kids who have gotten in trouble from into the juvenile justice system. The Promise Center will be a place where police officers, social service agencies and other engaged groups will be able to receive counseling, mentoring and services – not only for them but for all members of the family and the community. (Photo by Maria Saporta)