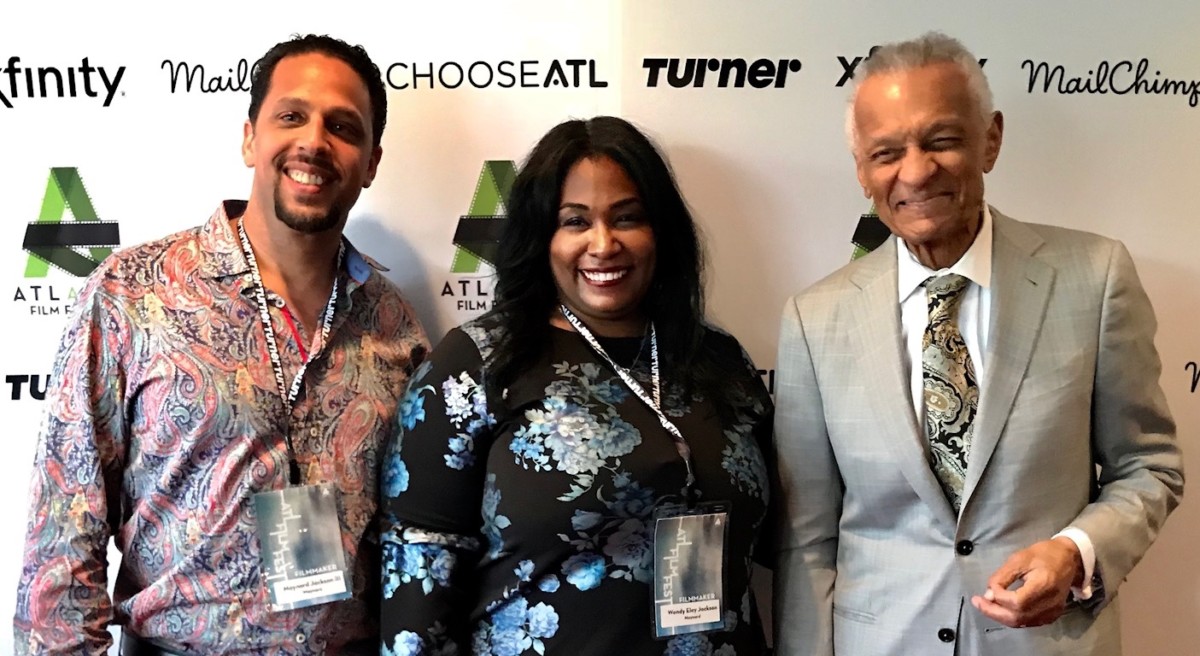 The film was a featured presentation of the Atlanta Film Festival, which actually was launched when Jackson was in office.

Before the showing of the “Maynard” movie, Chris Escobar, executive director of the Atlanta Film Festival, actually made a presentation to the Maynard “Buzzy” Jackson III and his wife, Wendy Eley Jackson (who both championed the project) a copy of one of the festival’s programs from the mid-1970s that included a letter from the mayor. 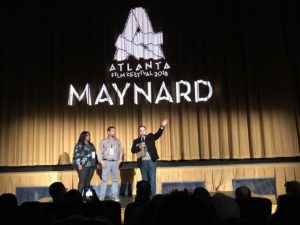 The Plaza Theatre actually reopened the balcony in time for the showing of the premier to the theater’s original configuration (the Plaza has had the balcony split off into its own theater so it could show two movies simultaneously.

Escobar also announced that the “Maynard” will have a commercial run at the Plaza starting May 4 and lasting at least two weeks.

If Saturday’s premier is any indication, the “Maynard” movie will be a draw for people interested in knowing about an incredible time in Atlanta’s history – a time when political power shifted from the white business community to a mecca for African-American leaders.

The movie, in the works for a couple of years, portrays Jackson as the larger than life political figure that he was. It does tackle some of Jackson’s struggles and challenges in a forthright way – not necessarily a pure “vanity” film one would expect from a family-driven project.

The documentary also shares deeply personal family stories – the relationship between father and son, the time when Jackson told his eldest daughter he was getting a divorce from her mother – Bunnie Jackson Ransom, a love poem that Jackson had written to his second wife – Valerie Jackson, his difficult third term as mayor, and details about his passing on June 23, 2003. 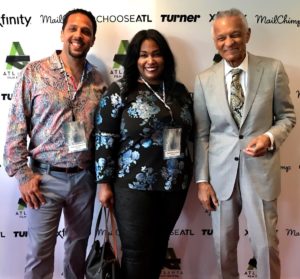 The documentary is certainly a valiant effort – directed by Sam Pollard – who focused on Jackson’s efforts to integrate the Atlanta business community as well as his influence as a national political leader.

Because Jackson was such large person – in both his presence and his spirit – documenting his life in 90 minutes is bound to leave out some important elements.

The movie focused on how Jackson, being elected as Atlanta’s first black mayor in 1973 at the young age of 35, won because Atlanta’s population was shifted from white to black.

But the documentary left out a major part of that story. Jackson also had the strong support in several intown, mostly white neighborhoods because of his stance against building I-485 and the Stone Mountain Tollway through Morningside, Virginia-Highland, Candler Park and Druid Hills.

Jackson actually had a strong populist streak. During his first term as mayor, he reorganized the city’s governance structure by giving a much greater voice to neighborhoods and planning – creating the Neighborhood Planning Units to ensure that decisions were not top-down but bottom-up. 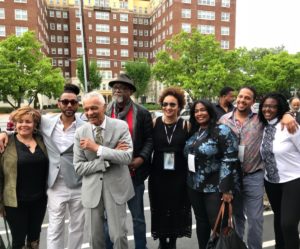 During Jackson’s third term, the city needed to meet the federal consent decree on its combined sewer overflow system. A plan had been proposed to build a four-story sewage treatment plant along 10thStreet (next to what is now Park Tavern) and to turn the meadow into “Georgia Lake,” which would have included both sewage and storm water during heavy rains.

My father – I.E. Saporta and an army of champions, including Bill Eisenhauer, gathered 100,000 names on petitions for STOP (Sewage Treatment Out of Park). They went to City Hall to present the petitions to Jackson in his office. The project had already been put out for bid, but my father and Eisenhauer were able to convince Jackson about how bad it would be to put a sewage treatment plan in  Atlanta’s signature park.

While they were in his office, Jackson called his public works commissioner and told him to put the project on hold. Later Jackson told me that my father was the conscience for Atlanta.

I remember the first time I interviewed Jackson when I was doing a summer internship in 1974 at Creative Loafing. A plan had be presented to tear down the Fox Theatre, and I asked him if he was going to fight to save it. He then told me about his bitter memories of the Fox when blacks had to sit in the colored section in the balcony, having to enter from the exterior steps. 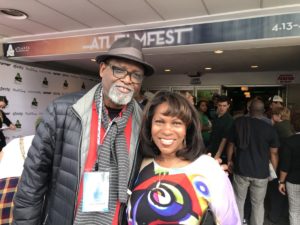 Despite those initial feelings, Jackson listened to the “Save the Fox” group and eventually did not approve the demolition permit. Again, what was most important to Jackson was what was best of Atlanta.

Six months after he had completed his second term, I sat down for a long interview with Jackson – talking about his transition from public to private life. Towards the end of the interview, I asked him what he missed most about being mayor.

After a pause to think about his response, Jackson simply answered: “Being in the know.”

Thankfully, the “Maynard” movie is making sure we don’t forget Jackson for who he was and how he helped change Atlanta.

Here are a few stories to read more about Mayor Maynard Jackson and the movie:

Maynard Movie seeking funds so that history will not die 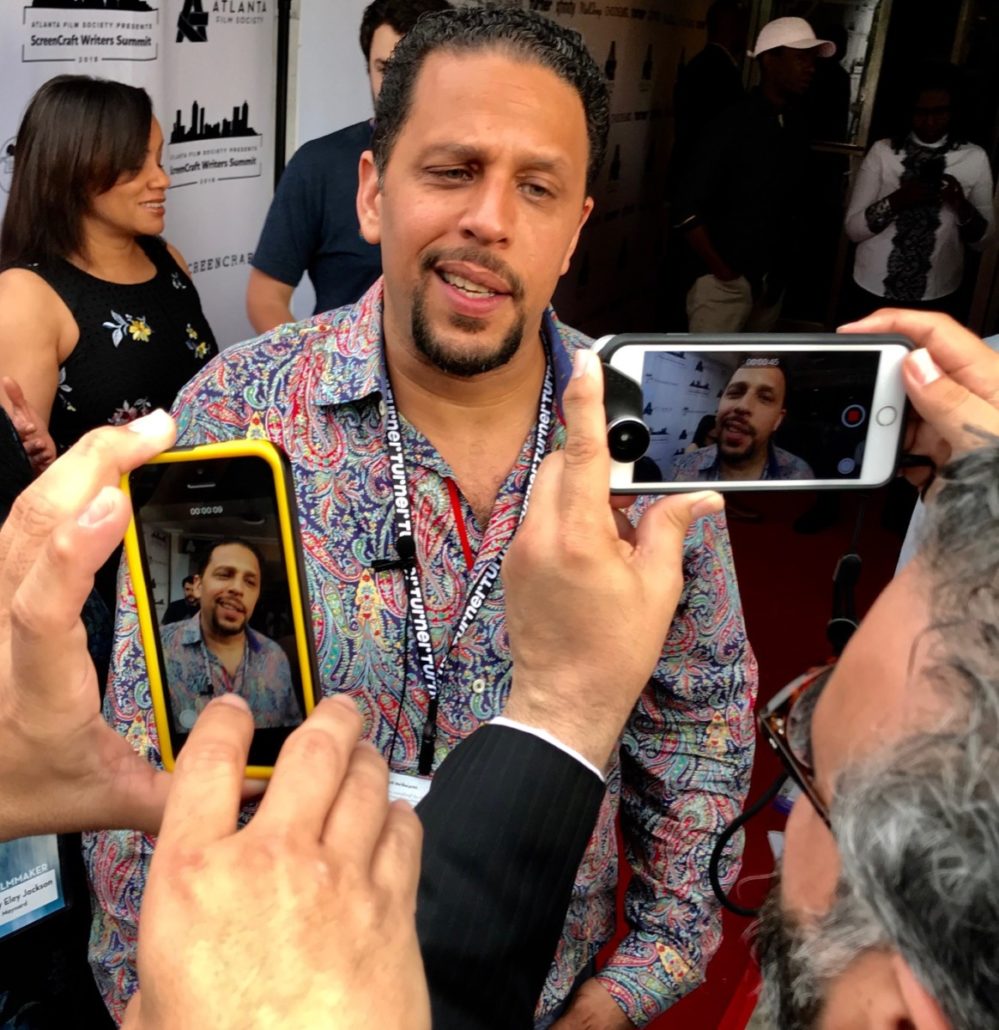 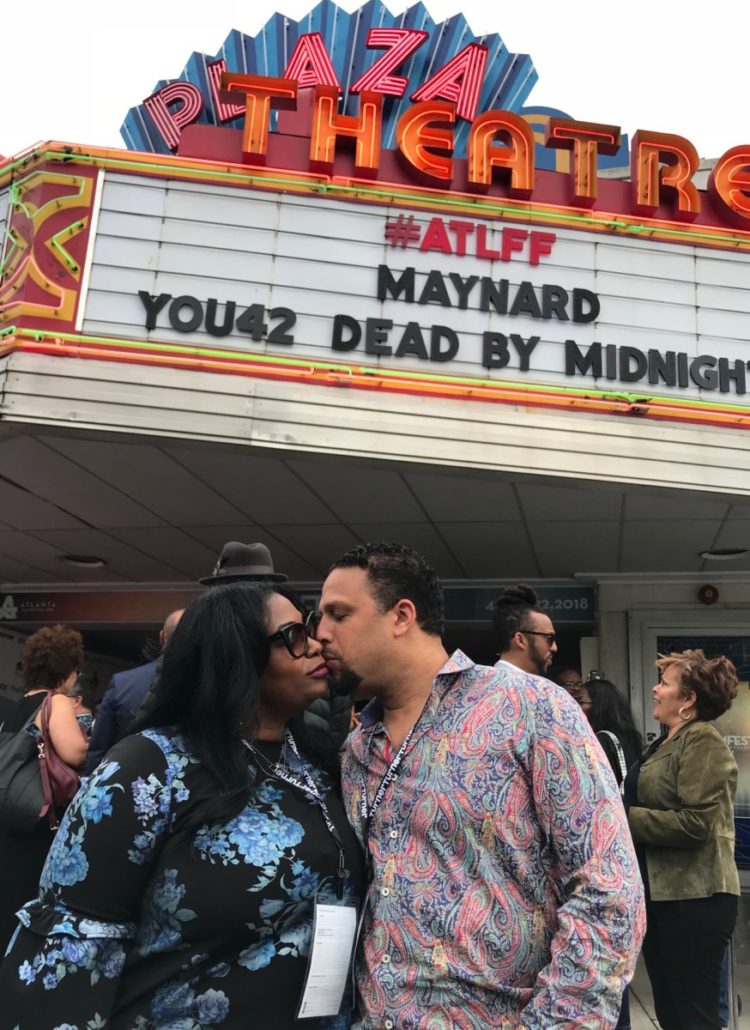 Maynard Jackson III kisses his wife, Wendy Eley Jackson, before the premier Atlanta showing of ” Maynard in front of the Plaza Theatre (Photo by Kelly Jordan) 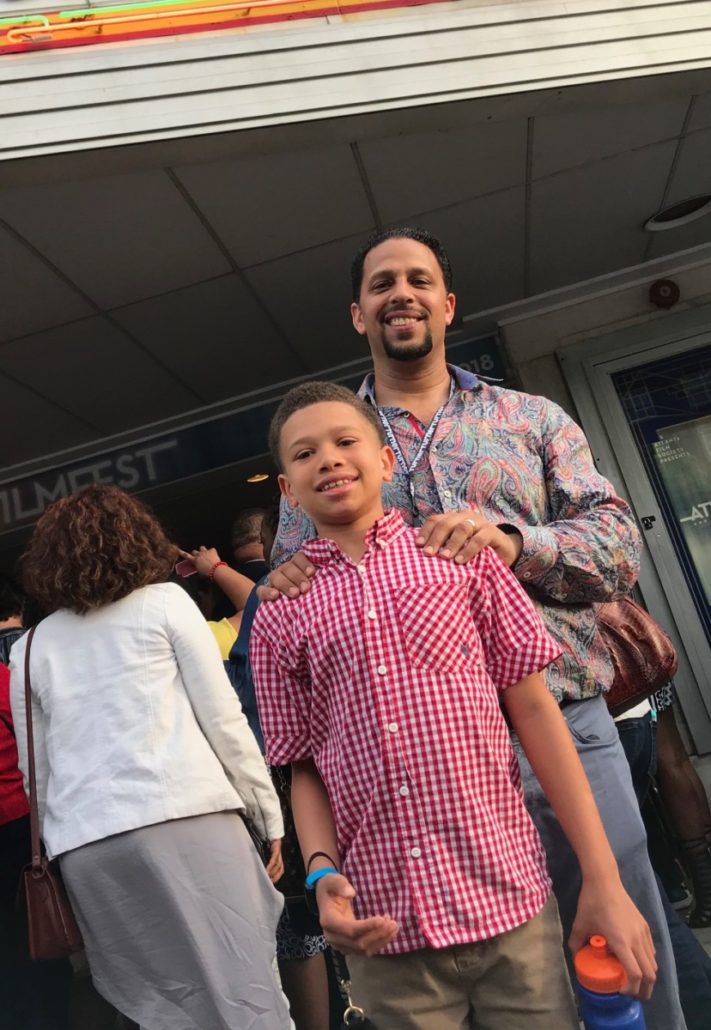 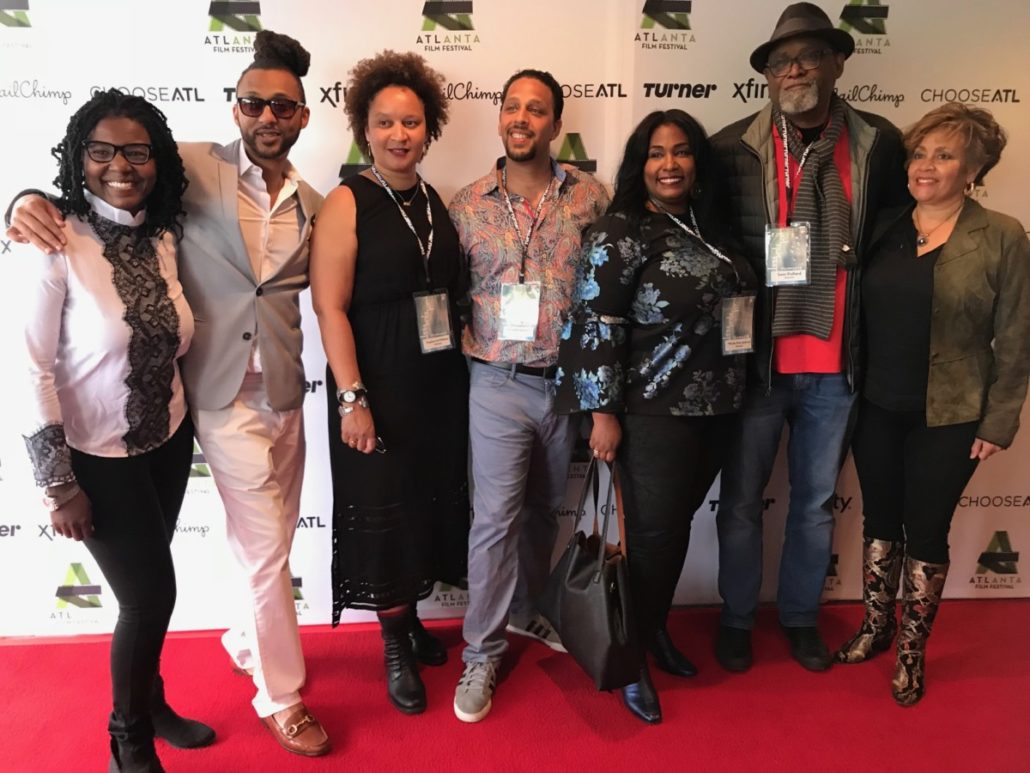 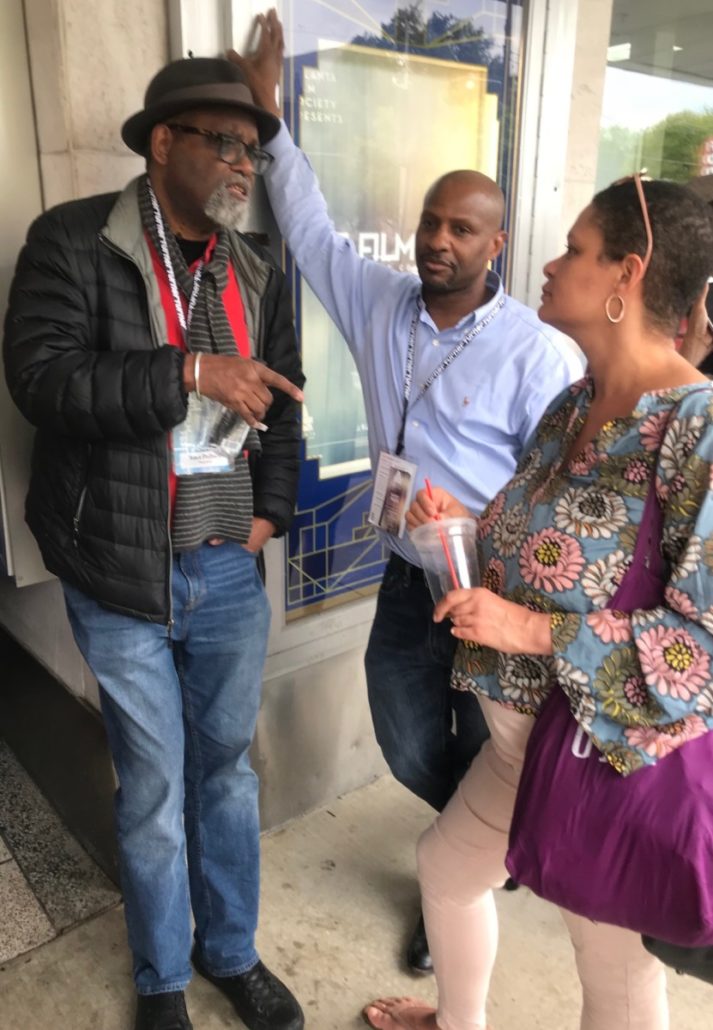 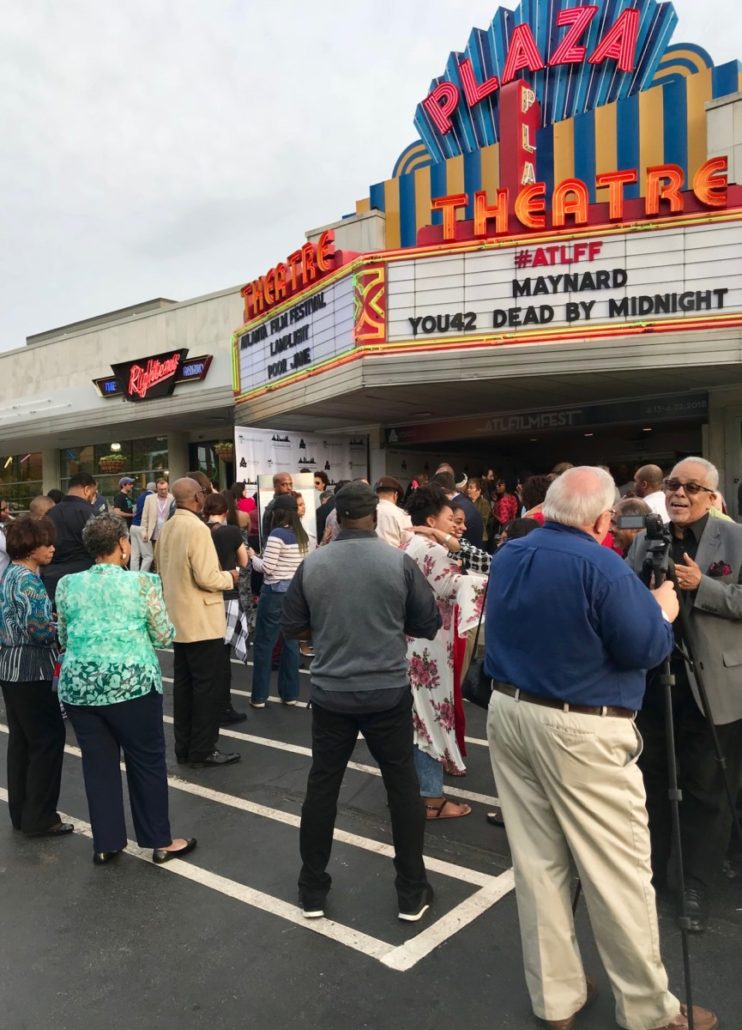 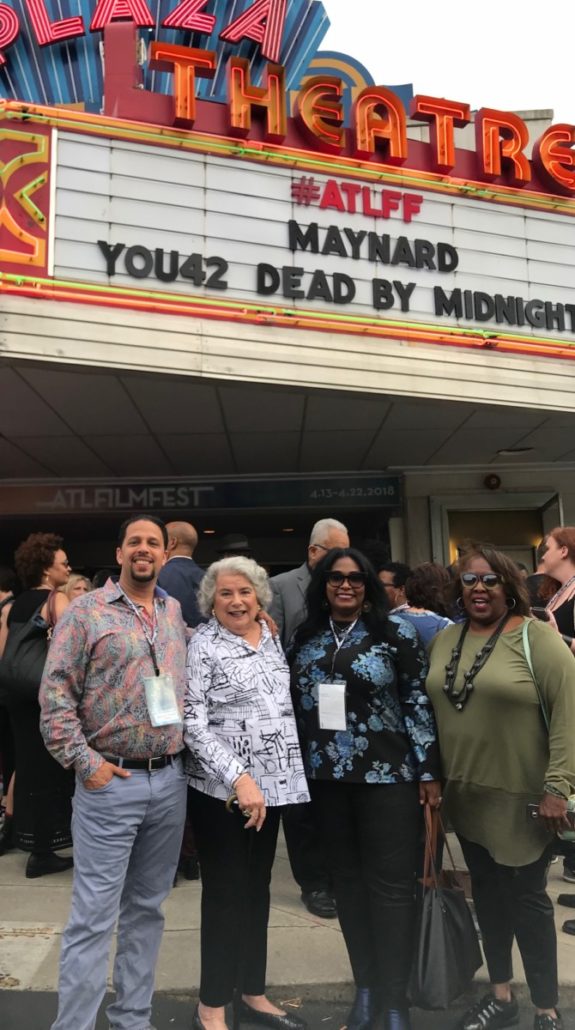 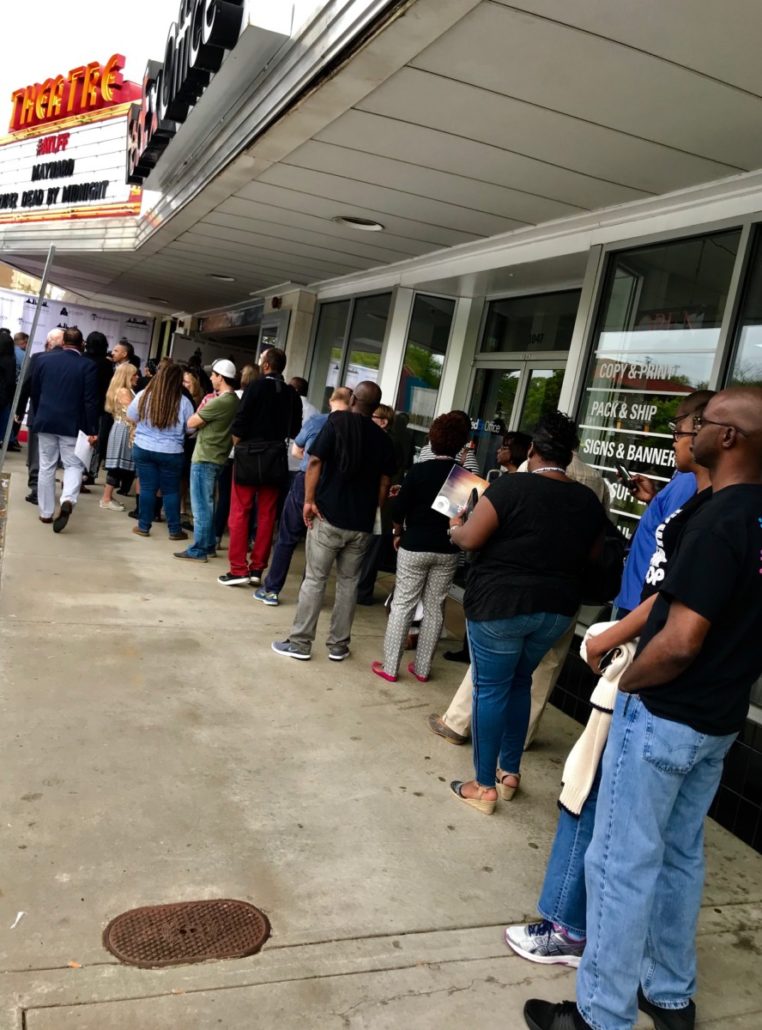