Georgia Congressman John Lewis received the “Legends Award” from the Rotary Club of Atlanta on Monday – a tribute that caused outgoing President David Moody to be overcome with emotion.

The Rotary meeting on Monday was a hybrid in-person and Zoom meeting. About 20 people were in the normal meeting spot at the Loudermilk Center sitting two to a table to practice social distancing. 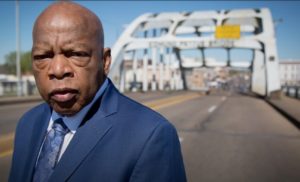 An image from the John Lewis tribute video prepared by Living Stories for the Rotary Club of Atlanta. Congressman John Lewis is standing in front of the Edmund Pettus bridge where he was beaten up 55 years ago for marching for the voting rights of Black Americans (Special)

Although Lewis was not there in person, Moody said he hoped the congressman had been able to watch the tribute.

“I first met John Lewis in 1977 when I was at Morehouse,” said Moody, who added that Lewis was running for Congress against Wyche Fowler. “He didn’t win that election, but he’ll always be No. 1 in my book. We all know he’s not doing well at all. John Lewis, we hope you’re listening.”

Rotary then showed a tribute video of John Lewis that had been put together by Rotarian David Duke with the firm Living Stories.

“It’s a real honor to accept this award on behalf of a living global legend,” said Stephen McDaniel, a close friend of Congressman Lewis.  “I know if he could, he would certainly be here with the Rotary Club of Atlanta to accept the award, especially from David Moody.”

Then Moody went up to the podium to give a closing message at his last meeting as Atlanta Rotary’s president. 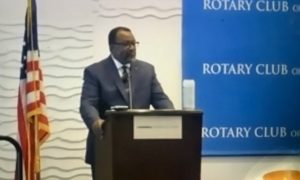 “I’ve come to the end of my journey,” said Moody, who began to choke up. “John Lewis really got me here. I’m standing here today because of people like him. You have no idea what it’s like some days and wonder if you are going to be judged by your skin color and not your heart.

“I didn’t think it would get to me as much as it did, but watching that video really got to me,” Moody continued. “I’m the second black president ever of this club. The heart of this club is unbelievable. I’m 64 years old, and I still think about my grandparents and parents and all of those who never had a chance because of the color of their skin. I was so blessed to come to Atlanta to Morehouse. I so happy I came here.”

Moody also recalled when fellow builder Tommy Holder called him to tell him he was to be president of Rotary during the 2019/2020 year, and how moved he was. 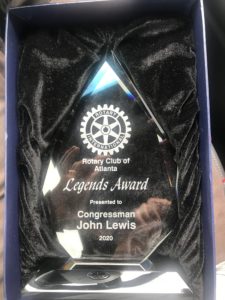 “Y’all can talk to me for crying,” Moody said while wiping away tears. “Watching the John Lewis video and remembering growing up to becoming president of this club… I will always love you, and I will always thank you for allowing me to be your president.”

Moody passed the gavel to Cannon Carr, who will be president for the next year. Carr told people watching via Zoom that everyone in the Loudermilk ballroom was giving Moody a standing ovation

“It’s an honor to follow you,” Carr told Moody. Then he added that the word that best describes Moody is “heart.” “He’s always given so much to so many people, and he’s never asked for anything back.”

The meeting Monday also featured Dr. Sanjay Gupta, a neurosurgeon who is the chief medical correspondent for CNN. Gupta gave Rotarians an update on the coronavirus – emphasizing the need for people to wear masks and practice social distancing. He also said widespread testing, including pool testing, was the only way to really control the spread of the disease.

But developing a vaccine was going to be the only way to fully get the coronavirus under control, and he is amazed at the fast pace of vaccine trials around the world.

“They’ve done in weeks what sometimes has taken years,” said Gupta, who added that he expects for there to be a vaccine by the end of the year or early next years. “Typically, it takes decades.”