Editors note: This story has been corrected to reflect the anticipated start of passenger service on April 30, 2014.

Representatives of six transit operating companies that want to run the Atlanta Streetcar took a walking tour of the route Thursday. 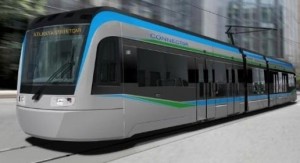 This is a prototype of the vehicle that will serve the Atlanta BeltLine and Atlanta Streetcar systems. Credit: File/City of Atlanta

The companies attended a pre-proposal conference conducted by MARTA to introduce the streetcar to the market of companies that have expressed an interest in operating and maintaining the service through March 2018. Bids are due June 28.

MARTA intends for the contract operator of the streetcar to start work around Sept. 15. Passenger service is anticipated to begin on April 30, 2014, according to a schedule included in the request for proposals.

A group of 27 representatives attended the meeting, according to the sign-in sheet.

They included, in addition to those from the six transit companies, representatives of an engineering firm, the company that built the streetcars, and a recruiting/management consulting firm.

A seventh person signed in as the director of bus operations of a firm listed only as WBDS. The closest match of that name available on Hoovers is WBDS Cornerstone, which Hoovers lists as an excavator in Texas.

Also represented were the city of Atlanta, MARTA and Central Atlanta Progress – the three entities that have pooled resources to build and operate the streetcar.

The six companies that sent representatives include:

The other firms who sent representatives are URS, Siemens, and Pragmatek/DHG.

Previous Article
A true preservation victory as Randolph-Lucas house gets new life
Next Article
‘After Earth’ — Real life father and son, Will and Jaden Smith, return to earth 1,000 years from now