Walking along the streets of downtown Atlanta, painted multi-colored lines are the first sign that the Atlanta Streetcar is on its way.

Those are the markings of all the utilities that lay underneath the surface of downtown streets — telephone, cable, fiber, water, sewer, gas and electrical lines. There are even abandoned streetcar tracks and the vestiges of pipes that were once a downtown steam heating system that served downtown buildings.

Many of those utilities will have to be relocated to make way of the 2.7-mile streetcar line that will connect Centennial Olympic Park with Ebenezer Baptist Church along an east-west axis that will travel mostly along International Boulevard, Luckie Street, Auburn and Edgewood avenues.

On Saturday, Nov. 5, the Citizens for Progressive Transit organized a walking tour of the streetcar’s alignment — giving interested citizens an inside look of how the new rail transit system could transform our downtown area. 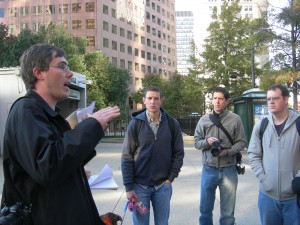 The start of the walking tour is at Peachtree and Ellis streets, the one place where the streetcar will connect with MARTA (Photos by Maria Saporta)

The tour guide was Paul Grether, a MARTA professional who is the manager of streetcar development. The Atlanta Streetcar became a reality for downtown when the federal government approved a $47 million grant for what was originally envisioned to be a $69 million project in October, 2010.

Although the City of Atlanta applied for the grant, it was done in concert with Central Atlanta Progress and MARTA — a wonderful model of how collaboration can work as we seek to implement new transit projects in the coming years. 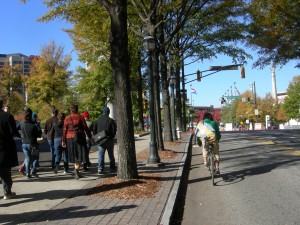 The streetcar will go along Andrew Young International Boulevard until it reaches the end of the line at Centennial Olympic Park. A few of these trees will have to be cut down for the streetcar's layover stop.

Partly because of increased cost to move utilities and to design streetscapes to accommodate the new streetcar, now the project is estimated to cost a total $83 million, according to Jennifer Ball, CAP’s vice president of planning and economic development.

The different entities have figured out how to pay for the increased costs, such as a $5.5 million grant from the Atlanta Regional Commission’s Livable Communities Coalition and funding from the City of Atlanta’s Department of Public Works for the relocation of water and sewer lines.

During the walking tour, Grether’s depiction of the project revealed all the complexities that come with resurrecting a downtown with streetcars after a gap of more than five decades since the city was filled with streetcars. 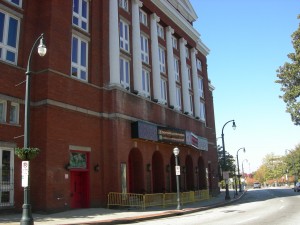 The return of the streetcar is one of the most welcomed developments for downtown Atlanta. Based on the experience of a host of other U.S. cities, streetcars have sparked the rebirth of central areas by creating a pedestrian-oriented environment that encourages the reinvestment in downtowns.

That said, the plans for the Atlanta streetcar have two major shortcomings — two flaws that can and should be corrected for the project to reach its full potential. 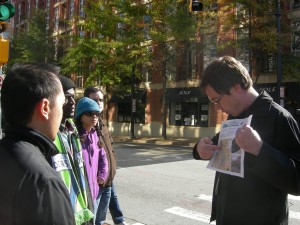 The only place where the streetcars will intersect will be at Woodruff Park at Auburn Avenue and Peachtree Street. Paul Grether shows the route on a map.

Point one — frequency of service.

Atlanta’s streetcar team bought four actual rail cars, but only two cars are expected to be in service on a regular basis. One of the cars is a spare in case of a breakdown. And the fourth car will be available for special events.

As a result of the scarcity of cars, the streetcars will only run every 15 minutes. If Atlanta leaders really want streetcars to become a viable transportation option for our community, they need to do much better than that. 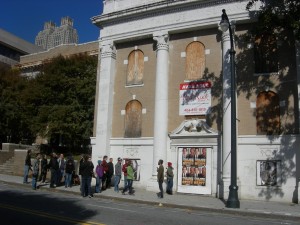 One of the real historic gems along the streetcar route. Downtown leaders hope the streetcar will encourage new investment downtown.

A downtown streetcar should be running every five minutes — assuring folks that this is a service that will get them where they need to go within a reasonable amount of time. To go from one end of the line to the other will take 10 minutes on the streetcar.

Many of the stops are close enough to walk. So why would one want to stand around for 15 minutes waiting for a streetcar when they could probably walk most of the way in the same amount of time? Folks could say that the streetcar would be a good alternative if the weather is bad. But again, who would want to stand around for 15 minutes in bad weather? 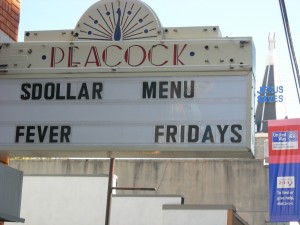 Another gem along the route — the Royal Peacock.

The decision to have 15 minute headways reminds me of the stupidity to have eight to 10 minute headways on MARTA trains at peak times. We spend billions of dollars to build the backbone of a regional transit system, and then we skimp on the operating side. MARTA was designed to have trains every 90 seconds. For riders to be able to rely on the system as a transportation option, the minimum time between trains should be five or six minutes at most.

Yes, it does cost more money to run rail cars more frequently, but that’s the whole point of building a system — to make it as attractive a transportation option as possible for the choice rider. 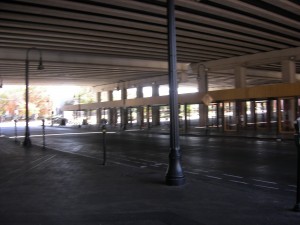 The streetcar's maintenance facility will be located underneath the Downtown Connector between Auburn and Edgewood.

If we really want students to jump on the streetcar to get to Georgia State University, or downtown workers to explore other parts of downtown during their lunch break, one can’t have them waiting 15 minutes on each end for a streetcar. 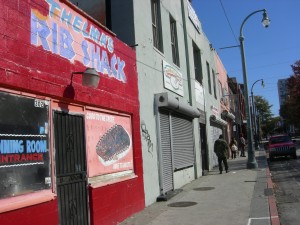 Central Atlanta Progress has identified 80 acres of land and buildings along the route that currently are underused. Here is a stretch along Sweet Auburn.

As it is now designed, the streetcar will go as far as International Boulevard and Centennial Olympic Park Boulevard. That is nearly half a mile away from the key destinations of the Georgia Aquarium, the World of Coke and most importantly, the National Center for Civil and Human Rights.

When the project was being to sold to us, the idea was to connect the civil rights center with the King Center on Auburn Avenue. The other end stop is Auburn Avenue and Jackson, which would bring riders near the front door of one of Atlanta’s greatest treasures. 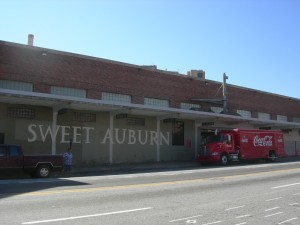 Another key destination along the route — the Sweet Auburn Curb Market on Edgewood.

But not connecting the King district with the high profile tourist attractions on the northern end of Centennial Olympic Park is another missed opportunity. Ideally, the streetcar would have continued west on International Boulevard, had a stop at Marietta to serve those going to the Georgia World Congress Center and then turned right on Baker Street and loop back around to Centennial Olympic Boulevard.

“When the system was being planned, we looked at a larger loop, but it wasn’t within our budget,” Grether said. 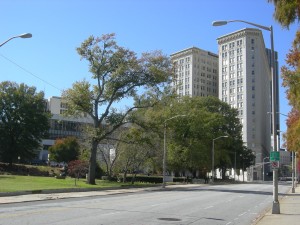 The historic Hurt building and Hurt Park will be another key stop serving Georgia State students.

The good news is that the streetcar team bought “off-the-shelf” railcars, and it could buy two or three new rail cars to get the frequency of service where it needs to be.

Also, if voter pass the regional sales tax referendum next year, part of the funding for the BeltLine transit service would go to extending the route of the streetcar. 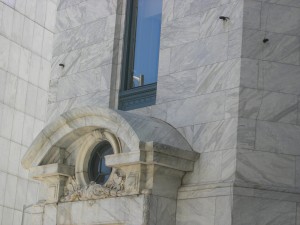 A close up of the Hurt Building. Notice the small black hooks in the building. Those used to hang streetcar cables decades ago, and they might be used again.

Despite those two drawbacks, having a streetcar downtown will give people a taste one of the most exciting modes of urban transportation that exists today. It also will put a stake in the ground for long-term economic investment and revitalization — which can only be good for our downtown.

So I welcome the streetcar. I just wish it would go further and run more frequently so it would become a system we all could use.