Ups and downs of Atlanta Streetcar project due to reintroducing transit

It’s been more than a half century since streetcars ran on Atlanta’s roads.

But that’s about to change — despite numerous obstacles that have revealed that we’re a bit rusty in the streetcar development business.

Construction work is progressing on the Atlanta Streetcar — and it currently appears that service will begin in the spring or early summer of 2014.

That is about six to seven months after the original schedule. But the project has experienced unforeseen delays — primarily over the relocation of underground utilities and the surprises of what exists underneath out streets. More than 15 utilities have been impacted.

That has delayed the ability to lay down tracks — but that should change in the next couple of months.

The delays also have led to a budget gap — over what money exists to build the project and what the contractor — URS — expects it will cost to finish up the work.

Several months ago, that gap was thought to be more than $10 million, but after ongoing negotiations the various entities have narrowed that gap to less than $5 million.

“We are still at the table,” said Tom Weyandt, senior transportation policy advisor for the City of Atlanta. “We have exchanged further proposals as recently as last week, and we have put out a plan for moving forward. We are waiting for a response from them, and I have got every expectation that they will be the contractor for this job. We are within striking distance of reaching a final number with URS.”

The Atlanta Streetcar is a public-private partnership between the City, MARTA and the private Central Atlanta Progress/Atlanta Downtown Improvement District. The $92.7 million project won a $47.7 million federal TIGER II grant, which gave the project life.

“URS continues to make good progress in finalizing the Atlanta Streetcar contract,” said Ed Hrinewski, the firm’s project manager. “While Atlanta’s streets have a number of historical buildings with underground utility systems that have added some complexities to this project, we have made significant progress in identifying the challenges and developing the solutions necessary to move forward with the construction of the streetcar.”

To make it as “shovel-ready” as possible, the joint venture team had to enter into a “design-build” contract, meaning that the project was being designed at the same time that construction work was underway.

“You have to deal with a lot of unknowns,” said A.J. Robinson, president of Central Atlanta Progress. “That’s what has made it difficult — deciding who should take the risk – the contractor or the sponsors.”

The project’s $52 million construction budget does include a financial buffer for “contingencies” to help cover cost overruns, and the current gap is within that buffer. But the project team does not want to use up all of its contingency budget in case other issues come up.

Another dynamic that has been at play is that when the project was first put out for bid, the region had not yet held the transportation sales tax referendum, which included a number of new transit projects — primarily light rail and streetcar.

Several construction companies entered competitive bids to build the streetcar, perhaps anticipating that if the referendum passed, they would be in a better position to build the other transit projects. But that incentive went away when the referendum failed.

Here is a breakdown of the project’s total budget:

In addition to the TIGER grant, the City of Atlanta has put in $15.6 million into the project; the Atlanta Downtown Improvement District has put in $6 million for an “initial net project total” of $69.3 million.

The remaining budget for the project includes $9 million that the City of Atlanta has allocated to buy the streetcars; $8 million from the Department of Watershed Management to move water and sewer pipes; $5.1 million in a Livable Centers Initiative grant for transit and pedestrian enhancements; and a $1.25 million LCI grant to make Luckie Street two ways. 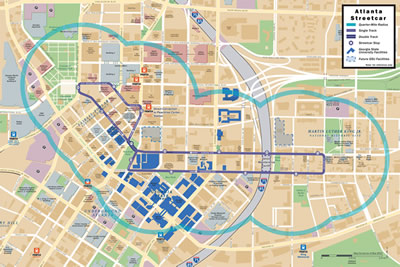 Another significant shift in the project is over who will operate the streetcar.

Initially, MARTA was expected to be the operator. But now that’s not a certainty. Now the plan is to go to market in about six months with a request for proposal (RFP) to have various entities bid on operating the streetcar.

“We are still talking to MARTA about the nature and the form of operations, and we are in the process of drafting a RFP to get the most efficient and cost effective operator to run this system,” Weyandt said. “It does not necessarily exclude MARTA. They will be the contracting authority.”

What has become clear throughout this process is that Atlanta entities have had to rebuild their expertise in building new transit — especially streetcars that use the existing roadways.

And although the referendum did not pass, Weyandt said the city is continuing to pursue other options to build new transit..

“We are actively looking at what the next phases will be and what the next corridor will be,” Weyandt said. “We actually can control our own fate here. We own virtually all the right of way. We also are also looking at alternative funding. through public-private partnerships.”

Case in point, the City currently is looking to hire a director of streetcars; and it is applying to become a grantee of the Federal Transit Administration that would allow the City to apply directly for federal grants.

Robinson also is optimistic about the impact that the Atlanta Streetcar will have on downtown, saying that already several new developments are being planned along the 2.62-mile streetcar route.

The building of the Atlanta Streetcar is the dawn of a new era for transit — one that can begin to transform the way we get around in our community. The Atlanta Streetcar has exposed the difficulties that come with having to re-enter the transit business after having been out of the game for decades.

But leaders behind the project believe it will be well worth the pain.

Previous Article
Builders of Falcons stadium may have to hire low-income city residents
Next Article
Lockhart: growth to stay slow in 2013