Atlanta Streetcar to get conduct code: No vaping, spitting, or evading fare 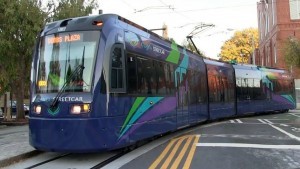 Just as MARTA has its Ride With Respect code of conduct, the Atlanta Streetcar could soon have its own conduct code that outlaws everything from evading a fare, to spitting, to vaping an electronic cigarette.

Atlanta City Councilmember C.T. Martin introduced legislation that begins with a prohibition against fare evasion. The penalty for each infraction would be $100.

The legislation then goes on to ban an array of behaviors and activities that could have a negative impact on a passenger’s experience aboard a streetcar or stop platform. Each penalty would be $100.

This isn’t Martin’s first foray into the arena of regulating public behavior. In 2007, Martin was the first elected official in the region to propose a ban on droopy pants.

The fad of letting pants droop well below the hips started with rappers spread through music videos. Performers appeared to adopt the style from prison garb, where uniform pants drooped because belts were banned to prevent their use as a weapon or a tool for suicide. Martin said he and others were tired of seeing young people drooping their pants and displaying their boxers, thongs, or whatever undergarment.

For Atlanta’s streetcars and stop platforms, Martin proposed a litany of offenses based on public behavior. The proposed legislation was approved on substitute Monday by the Atlanta City Council’s Public Safety Committee, which Martin chairs. The committee approved the proposal without comment.

The paper is scheduled for a vote by the council at its meeting Nov. 16. Here are some activities that were banned in the original legislation:

MARTA adopted its Ride with Respect program in 2013. It appears to have served as a model for the provisions Martin proposed in his legislation. The codes share similarities, right down to the ban on vaping – which huffingtonpost.com identified as a trend in July 2014. 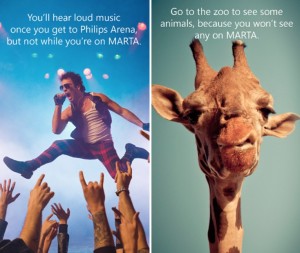 MARTA prohibits music being played, except through earphones or headsets, and most animals from the system. Credit: itsmarta.com