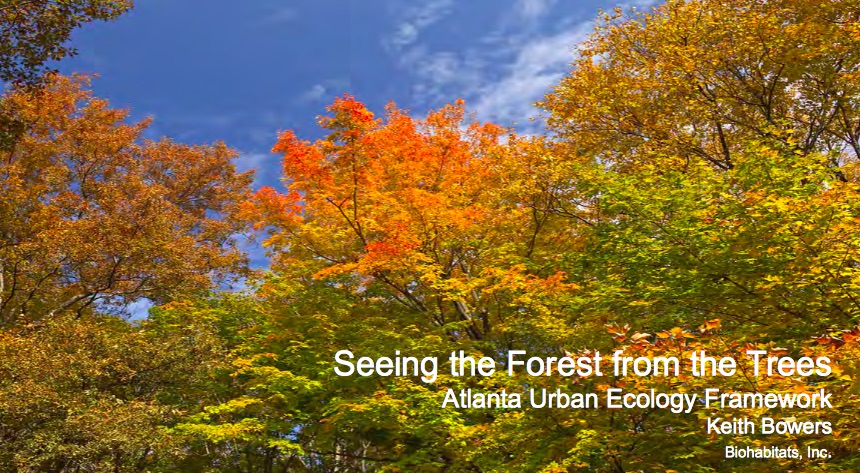 Biohabitats working on 'urban ecology framework' for the City of Atlanta

Atlanta is full of streets and neighborhoods with names that hark back to a different time – when the city’s natural environment defined communities before they became built up, paved over or tunneled under.

Now a comprehensive effort is underway to bring back Atlanta’s natural amenities and make them part of our city’s future.

“We are not really restoring the past; we are restoring the future,” explained Keith Bowers, president of Charleston-based Biohabitats. “We are trying to figure out how we can bring back the attributes of that past.” 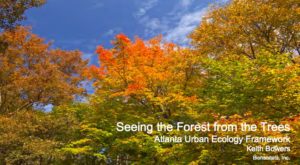 Biohabitats working on ‘urban ecology framework’ for the City of Atlanta

Biohabitats has been selected by the Atlanta planning department to develop an “urban ecology framework” that will guide how the city will develop.

It is part of the Atlanta City Design process that is preparing for a potential doubling of the city’s population in the next 25 years. The goal of the planning process is to create an even more livable city despite, or even because of, the anticipated growth in population.

One of the core ideas behind the City Design is to begin with Atlanta’s natural assets, and Biohabitats is beginning an 18-month process to provide a framework on how we can create a more ecologically-friendly city.

Bowers presented the challenges and opportunities of the “urban ecology framework” at Park Pride’s Corporate Champion Roundtable, which was held at the Atlanta Botanical Garden on October 19 in a talk titled: Seeing the Forest from the Trees.

“We often think of cities as buildings, parking lots, apartments and roads,” Bowers said. But before the cities were built, the land was covered with rivers, streams and forests “teeming with birds and wildlife.”

Take Ponce de Leon Avenue, for example. The street got its name from Ponce de Leon Springs – Atlanta’s own fountain of youth. The area now covered up by a strip shopping center with a Whole Foods and a Home Depot with lots of surface parking used to be a park with natural fountains, a creek and a lake. The only clue that there used to be a lake there is that the small street to the west of the shopping center is called Lakeview Drive. 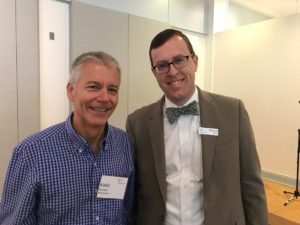 Bowers said the task of Biohabitats will be to provide a framework “to bring nature back into the city” – to bring biodiversity back to the built environment.

“We like to think about blurring the boundaries between parks and the city,” Bowers said. “Trees are what really defines Atlanta – trees and its watersheds.”

Atlanta already has efforts underway to restore some of its waterways – such as Proctor Creek on the northwest side.

But there are a host of other creeks and rivers throughout Atlanta that have been ignored, buried and overgrown. Instead of being ribbons of blue ways and greenways crisscrossing our city, they often are receptacles of trash, weeds and murky water.

“We are anchored by two great attributes – the Chattahoochee River and the South River,” Bowers said. He can envision a citywide trail network (using the BeltLine as a foundation) – designing connections between Atlanta’s green and blue amenities.

Atlanta’s streets also can become greener corridors by planting trees of different varieties to create a healthy ecosystem that reinforces our unique geography as a city in a forest.

“We are going to do something here that’s never been done,” said Tim Keane, Atlanta’s planning commissioner. “The idea from the beginning is to study the condition of the natural world that exists, what can be restored, and what of the urban  Atlanta can promote the natural ecology.

“The point is to put Atlanta into a position where nature is a parameter around which we design things,” Keane added. 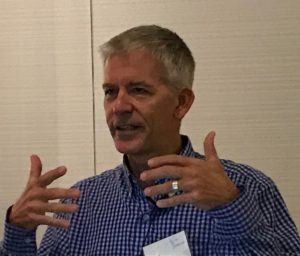 Bowers said Atlanta could set itself apart from other cities, if it designs and implements the urban ecology framework.

“Like all cities, it’s taken decades – hundreds of years – for cities to be where they are today,” Bowers said.. “There’s no other city that we have been involved with that has looked at this so deeply.”

During the 18 month design process, Bowers and Keane expect the effort to lead to a new tree ordinance and to a revision of the zoning ordinance. The idea will be to use both carrots and sticks to encourage development to occur in commercial corridors while conserving as much of the city’s tree-covered neighborhoods as possible.

“We are providing a natural context for Atlanta’s growth and development,” Bowers said, acknowledging that “so much of the green space is on private land.”

Bowers and Keane both hope Atlantans will embrace the idea of preserving, restoring and improving our natural qualities – especially the city’s trees and waterways.

“Everything we do should be exceptional,” Keane said. “Atlanta is an amazing place where the near future and the longer future present so many wonderful opportunities for us. We need to do better than any other city – let’s combine nature and urban better than anywhere.” 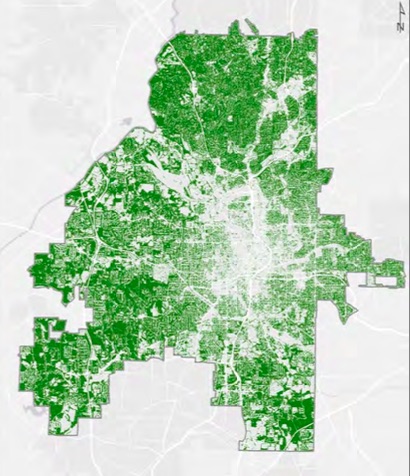 Most of Atlanta’s dense tree cover on the northern part of the city – and most of it is privately=owned (Special: Biohabitats presentation) 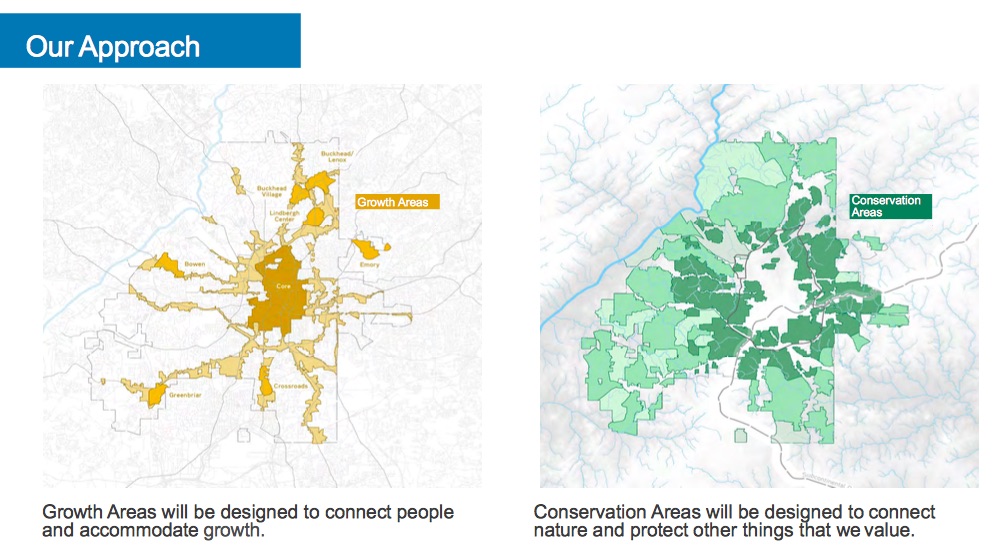